Home / News / NEPAL: Protests, violence, and killings persist in Terai, with no solution in sight

NEPAL: Protests, violence, and killings persist in Terai, with no solution in sight

The Asian Human Rights Commission (AHRC) has been closely monitoring incidents in Nepal’s Terai. The AHRC had been eagerly waiting for the government and the agitating forces to strike a deal. However, today, even after 6 months of standstill, there is no progression. The government has not discarded its killing attitude; protests and killings are still a near daily occurrence in the Terai Region.

The conflict boiled over 6 months ago, and since then life for people in the region has been upended. More than 57 people, including police and children have been killed in the violence. Meetings between top leaders from the 3 main political parties and the Madhesi leadership have all been fruitless. The government is not being serious about addressing the real issues; the AHRC has repeatedly cautioned the government of Nepal and the protesting parties of the likelihood of more killings if the root of the conflict is not addressed and its triggers are not defused.

Currently, the deaths fail to cease. Three persons have died after police opened fire on protesters in Morang District on 21 January 2016. Draupadi Devi Chaudhary, 58, a local resident of Rangeli and Shibu Majhi, 18, a resident of Dainiya, died on the spot. Mahadev Rishidev, 45, a local resident of Bardanga, succumbed to bullet injuries while undergoing treatment at the Koshi Zonal Hospital in Biratnagar. 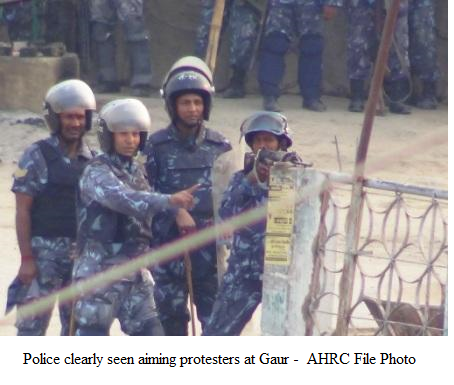 In this incident, the police fired fifty rounds of bullets and lobbed around hundred rounds of teargas canisters at the protestors. The condition of eight others, who sustained bullet injuries above the knee, is critical. They have been receiving treatment at the B.P. Koirala Institute of Health Sciences in Dharan.

The details are as follows: Bikram Sahani, 18, is in critical condition as a result of gunshot injury to his frontal lobe. Jaganath Sah, 40, is also critical due to gunshot injury in the abdomen, with bowel perforation and liver laceration. Satyanarayan Sah, 35, was shot in the chest and has pneumothorax. Muna Mandal, 30, sustained injuries on his left forearm, with vascular and nerve injury. Subodh Mandal, 28, has injuries to his left arm and is also in critical condition. On the other hand, Santosh Mehta, 31, and Dilip Darhiwal, 52, sustained head injuries following an attack by Lathis (Sticks) and Khukuris (Gorkha Knives), and their condition is comparatively less serious.

The incident took place in Rangeli and Dainiya of Morang District where Youth Force (YF), affiliated to CPN-UML, were holding a program on Constitution awareness, despite frequent warnings by cadres of the agitating United Democratic Madhesi Front (UDMF). When locals and UDMF cadres tried to disrupt the YF program as per their announcement, YF cadres resorted to vandalism and began terrorizing the households of Rangeli even in presence of police. Moreover, the police, backing the YF cadres, also misbehaved with locals of Rangeli, entering their houses, and harassing them.

Prime Minister K.P. Oli was supposed to address the programme organized by the YF. A day earlier, on January 20, when YF tried to set up a stage for the same program in Rangeli, the UDMF cadres had already prevented them. The YF subsequently relocated the program venue to the front of Area Police Office, Rangeli. For the program, more than 2,000 police personnel of Nepal Police and Armed Police Force were deployed. The YF cadres also carried weapons in police presence.

Following the fresh breakout of violence in Rangeli, the situation in areas along the Rangeli-Biratnagar road section, especially Dainiya, has taken a nasty turn. Locals are living in terror because of the resistance to YF’s actions and due to police brutality. The UDMF has also torched two vehicles belonging to the YF.

Furthermore, the AHRC has become aware of an incident, caught on video, where a police officer shot Mohammad Sams Tabarej, 16, while he was protesting alongside other students in Rautahat District on December 20 last year. The video shows Tabarej getting shot and other protesters dragging him away to take him to hospital. However, the police follow the group and chase the other protesters away. The police then circle Tabarej to beat him; this delays Tabarej’s journey to the hospital, which is located just 5 minutes from the site.

Due to these incidents, protests in Terai Districts are likely to intensify, at a time when dialogue between the government and the UDMF is underway. The sudden killings of persons in Morang District have frustrated the Madhesis and heightened a sense of alienation. Although the agitating parties were about to sign a deal with the government, following positive developments during negotiations, the government side itself once again disturbed the environment. Agitating communities have perceived the incident as a conspiracy to stop the Constitution amendment process in line with their demands and reflective of the government’s desire to forcefully push its initial amendment proposal.

The AHRC calls on the police in the Terai region to practice internationally approved crowd control tactics, and investigate, arrest, and punish anyone who breaches the rules, such those in uniform who are engaged in the intentional killing of protesters. Prime Minister K.P. Oli and the Minister for Home Affairs Shakti Bahadur Basnet must take responsibility for such killings. They must seek to de-escalate deteriorating security situation due to the ongoing strike, and address the looming humanitarian crisis.

The AHRC urges the security agencies to refrain from the use of excessive force against the protesters. In order to stop these orchestrated killings, guns should be retrieved from the police officers. Instead the officers should be equipped only with batons, shields, tear gas canisters, and water-shelling equipment. Also, the protesters must maintain restraint while staging protests. They must not bring home made weapons to the protesting sites. At a time when political parties have been inching towards final negotiations for constitutional settlement, such incidents can foil the process, and prolong deadlocks in Nepal.