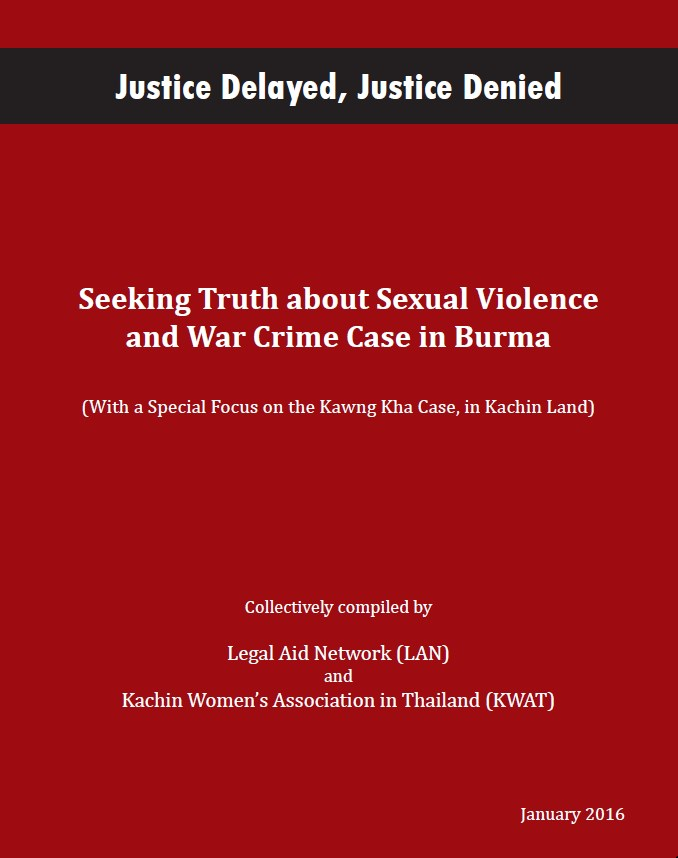 A new report exposes the systematic cover-up of the Myanmar Army’s involvement in the rape-murder of two Kachin teachers in Kawng Kha village, northern Shan State, exactly one year ago.
“Justice Delayed, Justice Denied” by the Kachin Women’s Association Thailand (KWAT) and Legal Aid Network (LAN) analyzes witness testimony to identify as a key suspect the commanding officer of the Myanmar troops camped in Kawng Kha, and shows how he and his superiors blocked and subverted the police investigation into the crime.

The Muse Strategic Military Commander and 200 soldiers were summoned to Kawng Kha straight after the crime. Under their scrutiny, police were only allowed to question twenty-eight of the over forty troops stationed in the village at the time of the crime, each for only a few minutes. Key evidence, such as bloody fingerprints, failed to be recorded. Some villagers were tortured to try and force them to confess to the crime.

The cover-up extended to the highest levels, with the government announcing after only ten days that the military were innocent of the crime, and President Thein Sein refusing to respond to appeals by the Kachin Baptist Convention to authorize their independent investigation into the case.

“The government priorities were clear in the Kawng Kha case – protect the military at all cost,” said KWAT General Secretary Moon Nay Li. “We urge the new NLD government to bring the perpetrators of this crime to justice, and end military impunity.”

The military’s continued power, and influence over the police and judiciary, is highlighted as a key structural barrier to justice in Burma, needing to be addressed through constitutional reform. A new bill protecting ex-presidents from prosecution for crimes while in office is a further setback to justice.

“Whatever amnesty he grants himself in Burma, President Thein Sein is still liable to prosecution for war crimes in accordance with the Geneva Convention, to which Burma is a party, if evidence on ‘command responsibility’ is found.” said Hkawng Lum, a human rights lawyer working with LAN.

NEPAL: Protests, violence, and killings persist in Terai, with no solution in sight »