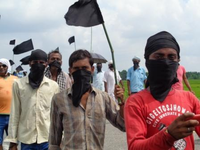 The Asian Human Rights Commission (AHRC) urges the Nepal government to take urgent measures in order to defuse alarming on-going violence in Biratnagar. Police have indiscriminately fired on protesters that had just begun to gather in order to carry out their plan to burn a copy of the Constitution promulgated yesterday.

The police fired live bullets randomly, and 8-10 persons have been reportedly injured. The situation is extremely tense; even the injured could not be taken to hospitals immediately. It appears the police are themselves deliberately not taking the people shot to hospitals on time, so that those shot suffer more and end up dying without getting any treatment.

No curfews have been imposed in Biratnagar, but the police brutality abounds and escalates. Around 500 police personnel have even entered the Muslim settlement ‘Sarhochiya’ and are going through the houses and beating villagers therein. The policemen are also shooting inside houses. More than dozens have already received police bullets, and this number rises as the violence continues to unfold.

The situation is critical. The policemen are even showing disdain for human rights defenders and UN staff monitoring the protests; as a result the observers are staying away from the protest areas in Biratnagar.

Earlier in the day, the Morang Chief District Officer Ganesh Bahadur Karki participated in a motorcycle rally organized by ruling parties. CDO Karki belongs to a family supporting the ruling Nepali Congress Party. For this government officer to show his political leanings indicate the fissures that divide Nepal’s Terai.

The AHRC urges the government of Nepal and its security agencies to maintain caution. Rather than de-escalating the situation, the security agency response is fuelling fire and perpetuating crimes. Violent confrontations in Biratnagar and other Terai districts must be stopped now.