The table given below sets down 09 extrajudicial killings, 01 attempted killing – 09 of which are at the hands of the police at various police stations and the other, in a prison. These 10 incidents are the ones reported to the Asian Human Rights Commission based in Hong Kong during this year. However, at this stage we are unable to state how many more such killings may have taken place. 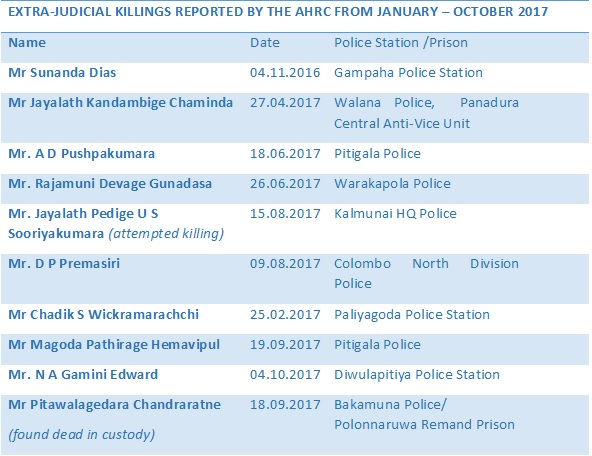 What is shown very clearly from the details about these killings is that they demonstrate an extraordinary level of carelessness by the law enforcement authorities regarding the lives of the ordinary people in the country. These cases demonstrate that this extra-ordinary carelessness regarding the lives of the people is spread from rank and files to the top layers at police stations and the policing service in general. Every extra-judicial killing involves the lower ranking officers as well as Officers in Charge of police stations (OICs), Assistant Superintendents of Police (ASPs) as well as the police authorities up to the Inspector General of Police himself.

For this type of killings to be possible, there has to be a clear breakdown of discipline at all layers of the police establishment. As this breakdown continues it is very likely that more such killings will take place in the days ahead. There is nothing to indicate that this serious criminal behaviour of the police officers involved in these killings have been taken note of by the higher police authorities and that any preventive measures have been discussed or adopted. All these killings could have been prevented if there was alertness to maintain law within the policing system – particularly by the Officers in Charge of the police stations and the Assistant Superintendents of the police. Under the Criminal Procedure Code an Officers in Charge of the police stations (OICs) are officially in charge of every criminal investigation. All orders for arrest as well as the manner in which the arrests would be carried out can take place only with the full knowledge of the OICs. And these OICs are also responsible for whatever accident or crime that takes place in the process of arrest and in the holding of arrestees in custody.

Neglect on the part of the ASPs

The Assistant Superintendents of the Police (ASPs) have the direct control of police stations under their charge. They are the direct supervising officers and as such, no extrajudicial killing could take place without their knowledge. As direct supervisors the ASPs bear the responsibility for ensuring that the work of the subordinate police officers are carried out within the framework of law and also the framework laid down by the Police Departmental Orders. Such extraordinary carelessness leading to extrajudicial killings could happen only because there is extraordinary carelessness on the part of the Officers in Charge of the Police.

At the point of arrest a citizen is taken under the custody of the police. Custody means protection. An arrestee is forcibly taken away from his or her family and other natural contacts. The sole protection that he has a right to expect is from the police themselves. At that point arresting officers as well as those giving orders for such arrests takes the responsibility for the protection of those they take into custody. Such officers act on behalf of the State to ensure protection that the state has undertaken to give to all citizens. Every extra-judicial killing and or any kind of crime committed against an arrestee, is a betrayal of the fundamental bond that exists between the State and a citizen in a democracy.

What is said above regarding the police can also be said about deaths that are allowed to happen within the premises of a prison. One of the deaths noted in the table above has taken place when the person was in prison custody.

The responsibility of the Magistrates

The blame does not stop only at the police. The Magistrates, who have jurisdiction over the area where such arrests have taken place, also by law, are under the obligation of protecting those who come under arrest. There is a judicial obligation to ensure protection to every person that is arrested and are in lawful custody.

What these extrajudicial killings demonstrate is an appalling absence of seriousness that has crept into the law enforcement agencies as well as judicial institutions in the areas where these killings have taken place. Such appalling carelessness is manifest in many different aspects; at the point of holding in custody and at the point of magisterial inquiries.

The entire system of administration of the police and the Magistrate’s courts is the apparatus, through which the state acts, in the serious task of investigations into crime. The utmost protection that should be extended to an arrestee can happen only through the hands of the police officers and the Magistrate in a particular jurisdiction. The mere fact of these deaths taking place itself is a serious indictment against this entire apparatus and those who manage it.

Various kinds of cynical excuses that are put forward such as that some of these deaths took place as a result of an exchange of a fire between the arrestee and the police, itself demonstrates that the light-heartedness with which such killings are allowed to happen. If such events in fact had happened, then strict inquiries by the higher ranking police officers and the Magistrates could easily expose the veracity of it. There is no indication that in any of these cases such serious inquests have been held.

Where are the CCTV cameras that the Minister for law and order promised to install when the extrajudicial killing of Kadireshan Ravishanker (34) took place at the Hatton Police station after he was called into the police station to give a haircut to the Head Quarters Inspector (HQI)? The Minister of Law and Order Sagala Ratnayake made a statement in Parliament saying that CCTV cameras will be installed in all police stations as a measure of protection of persons who are held in custody at police stations. However, it appears that this statement was made only as a public relations exercise in order to appease the public anger that expressed itself after the incident. Nothing has been done to fulfil this promise. To our knowledge there is not even a plan for installing such CCTV cameras. In many countries in the world, and several Asian countries included, including in the neighbouring Kerala State in India, measures have already been taken to install such cameras. However, the Sri Lankan government has not demonstrated any seriousness in carrying out its obligations towards the citizens who may be arrested for the purposes of criminal investigations.

What is really demonstrated in the Sri Lankan situation is that ill-educated lower ranking police officers are being unleashed particularly on the poorer sections of the population to act in any barbaric manner they wished in carrying out arrests. Results are these most barbarous killings.

The National Police Commission has two obligations relating to wrongful acts committed by police officers. One obligation is to conduct investigations relating to officers who are alleged to have done such acts. The other, even more important obligation is to investigate into the policing service as a whole. To our knowledge the NPC has not conducted a single inquiry into the state of the policing service as a whole in relation to what has gone wrong within the institution.

The NPC has failed in its constitutional duty to investigate the state of the policing service in terms of the manner in which the law is enforced within the service and discipline is being maintained.

Problems like extrajudicial killings could be brought under public scrutiny only through the exercise of the constitutional mandate of the NPC to investigate the policing service, at police station level and also at all other levels. It is the NPC’s duty to inquire into the causes for the poor quality of service rendered particularly by officers in charge of police stations and assistant superintendents of police. It is only through such public inquiries into the policing service as a whole that the appalling situation which now exists could be brought to an end.

However the National Police Commission does not have the capacity to carry out this constitutional mandate of conducting inquiries into the policing service as a whole. NPCs inquiring officers are retired police officers. These officers are themselves products of a very bad system. In any case no impartial inquiry could be expected from them.

The NPC should seek the assistance of professional services of persons qualified in organizational matters as well as sociologists and psychologists and cause a public discussion on the present state of the policing service in Sri Lanka.

AHRC TV: India’s top court rules sex with wife below 18 is rape and other stories in JUST ASIA, Episode 193 »