AHRC TV: India’s top court rules sex with wife below 18 is rape and other stories in JUST ASIA, Episode 193

This week Just Asia begins with India, where the Supreme Court ruled that sex with a wife younger than 18 is rape. This is a much needed legal development for child rights, and will help in the fight to end child marriage in the country. Sadly, the fight against marital rape for adult women continues. It is hoped that marital rape will soon become criminal, irrespective of age. 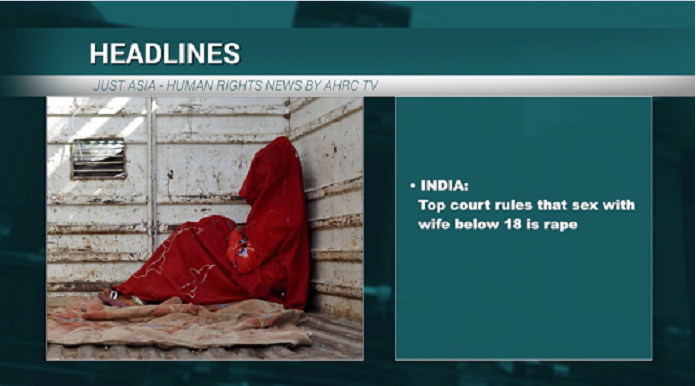 Next, newly released satellite images reveal that at least 66 villages were burned in Burma’s Rakhine state after September 5, when security operations supposedly ended. The Burmese military was responding to attacks by the Arakan Rohingya Salvation Army on August 25, with a campaign of violence and ethnic cleansing. According to Human Rights Watch, 288 Rohingya villages were partially or totally destroyed by fire since August 25. Analysis of the satellite imagery indicates that the burnings focused on Rohingya villages.

Bangladesh’s Supreme Court Chief Justice was forced to take a month’s leave and go off to Australia, so that Prime Minister Hasina’s government could appoint a new Chief Justice and reverse the judgment nullifying the 16th Constitutional Amendment. The Amendment, known as 16A, gives the parliament power to sack a higher court judge with a two-thirds majority. It was passed in parliament in September 2014, when the main opposition party had no representation in parliament.

Corruption and bribery within Indonesia’s judiciary is also in the spotlight again, with the latest arrest of Chief Justice Sudiwardono of Manado High Court, North Sulawesi province, on 7 October 2017. He was arrested by Indonesia’s corruption watchdog, the KPK, for allegedly accepting bribes by Golkar party member Aditya Moha, to reduce the sentence of a defendant.

Moving to Nepal, the country was elected to the United Nations Human Rights Council for the first time on 16 October 2017. Nepal’s term will begin on 1st January 2018, and end on 31st December 2020. This is an exceptional moment for Nepal, which underwent a decade of armed conflict from 1996 to 2006. It is an excellent opportunity for Nepal to go through a self evaluation and establish itself as a human rights friendly country, committed towards the promotion and protection of human rights. Most importantly, Nepal must work on prosecution perpetrators and providing justice to victims and families.