PAKISTAN: Without respect for law, legal profession will flounder 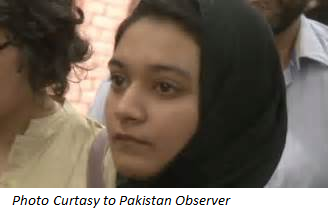 The darker side of Pakistan’s lawyers’ cartel has been exposed in the case of law student Khadija Siddiqui, who was stabbed 23 times by her class fellow, Shah Husain, the son of a senior Supreme Court lawyer. After this horrific attack, Khadija could not find a single lawyer to take up her case. Being the son of a senior lawyer however, Husain was represented by three former presidents of High Court Bar Associations, several members of the Pakistan Bar Council, members of the Lahore district Bar Association, retired judges, ex-deputy attorney generals, and even the present secretary of the Supreme Court Bar Association.

Khadija had gone to pick up her younger sister from school on 3 May 2016, along with her driver, when Husain violently attacked the 22-year-old student, leaving her critically injured. Instead of assisting Khadija in obtaining justice against her assailant, senior Bar Association members harassed and threatened her to withdraw the case against their colleague’s son. As the victim, Khadija had to fight not only against the perpetrator, but also the hordes of lawyers up in arms against her for daring to take her attacker to task and infringing the ‘unity’ of the legal fraternity. The situation was such that the case was popularly referred to as ‘Khadija versus the Bar Associations’.

Pakistan’s prestigious legal profession is being tarnished by a few lawyers who are using their clout to take care of their interests, disregarding norms and regulations. According to news reports, when Shah Husain’s lawyers showed up for the hearings, they would be flanked by a large number of lawyers. The sole intention was to intimidate Khadija and her counsel. Inside the court, Khadija was asked embarrassing questions regarding her sexual activity. Her integrity and modesty was challenged in court, with the defendant’s lawyer attempting to prove that she was a “loose woman”, as though that is justification for murder.

Despite the odds, Khadija stood her ground and fought bravely for a year to get justice. Fortunately for Khadija, good sense prevailed, and her assailant was sentenced to seven years imprisonment. The Asian Human Rights Commission congratulates Khadija on her victory.

For many other women in Pakistan however, there are no happy endings, as in the case of 24-year-old Anam Ashraf, who suffered two attempts on her life by a thwarted suitor. The suitor is an influential lawyer, Imran Syed, who is married, with children. After Anam refused his advances, she was first shot by unknown attackers in January 2015, and then by Imran himself in September 2015, leaving her bedridden. Not only did the police not mention Imran’s name in the subsequent FIR that was filed, but Anam was also unable to engage any lawyer to represent her, due to Imran’s clout. Left with no option, she requested the court to engage a public prosecutor to represent her. However, no public prosecutor appeared on the hearing date either. In a one-month period, the court fixed four hearings, but Anam was without a lawyer on each hearing date, to contest her case.

Mukhtaran Mai’s case is another example of much suffering without any justice. Moreover, thousands of women are killed annually in Pakistan in honour killings, while their attackers walk free. The patriarchal mindset prevalent in the country considers it acceptable to harass and assault women for defying men. Systematic gender subordination only perpetuates violence.

Unfortunately, the legal profession, as well as the country’s justice institutions, are not immune to these misogynistic and chauvinist prejudices. Lawyers band together to protect their colleagues in any case of wrongdoing, regardless of the law. The general attitude of Bar Associations in misconduct cases is that of a cartel with monopoly over access to justice. According to a media report, on 2 August 2017, a group of lawyers barged into the Lahore High Court, where a contempt proceeding was being heard against Advocate Sher Zaman Qureshi, Lahore High Court Bar Association’s Multan president. He had allegedly vandalized and ransacked the court of Justice Qasim Khan in Multan. Instead of appearing in court as summoned, Advocate Sher Zaman instead sent a group of lawyers to create chaos in the court premises.

In 2015, a Supreme Court bench headed by then Chief Justice Jawad S. Khawaja has taken notice of the lack of accountability in the legal fraternity. It was revealed to the bench that the public at large has filed 7,500 complaints against lawyers in the last few years. However, the Bar Councils have neither investigated these complaints nor aided any process of bringing these lawyers to justice. The Bar chose to investigate only 17 lawyers.

The integrity and moral righteousness that is the hallmark of the legal profession should be upheld and must not be sacrificed for individuals associated with the profession. The practice of resorting to violence to protect colleagues must stop. If lawyers cannot respect the law, there is little hope for the profession and for the justice institutions associated with it. The Bar Councils must play a proactive role in ensuring accountability and penalties for lawyers who have transgressed. Lawyers found guilty of misconduct should have their license suspended and rescinded.

SRI LANKA: The ‘Satana’ debate on delay of justice »