Home / News / PAKISTAN: live burning of a girl exposes the state of human rights in the country

PAKISTAN: live burning of a girl exposes the state of human rights in the country

In a harrowing incident of honor killing a 16-year girl, Miss Amber, from Makol village near the town of Dunga Gali, distrct Abbottabad Khyber Pakhtun Khuwa (KPK) province was burned alive on 29th April 2016 for helping her friend elope. Because of her help her friend was married The incident caught media attention after a picture of charred body inside a burnt vehicle began to go viral on social media. An investigation was conducted after the civil society raised its concerns. Upon investigation it transpired that the victim Amber was burned alive on the orders of a so called Jirga (an illegal judicial system of tribal customs) to teach the girls around the area a lesson. The Jirga had decided that in order to stop ‘love marriages’ in the area, the helper girl must be punished to set an example for other girls. According to the Dunga Gali Police the Jirga was headed by Sardar Pervez, a local government councilor and a “notorious” leader of whom the entire village is afraid. 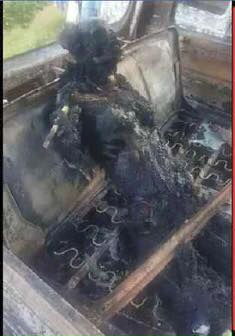 As per media reports having passed sentence on Amber, Pervaz dispatched a member of Jirga member, Sardar Saeed, to her home on the same night, where Amber’s mother was told to hand over her daughter or face her entire family being burnt alive in their home. Saeed then dragged Amber to another home, where she was drugged and she was burned alive in a Suzuki van, her body was doused in petrol and set ablaze in an attempt to show that it was an accident. Police say that the LPG gas cylinder did not catch the fire otherwise they would have not solved the case.
The father of the deceased girl said in an interview with media, he works hundreds miles away from his village and his family members were forced by the members of Jirga to hand over otherwise they will also be killed in honour of the village.

In this case, police have arrested 13 Jirga members. The victim’s parents were also arrested because they supported the Jirga decision. Sardar Pervaiz has also been arrested.

Amber’s case also shows the actual state of human rights in the country where the government and its machineries are least interested to improve the human rights. This is also example of worst situation against the women folk in Pakistan. The case highlights the plight of women suffering due to lack of state protection and rule of law. Honor killing becomes a norm when the judicial and state institutions fail to protect the marginalized and vulnerable allowing the perpetrators the impunity to take law into their own hands. Despite the enactment of many women friendly laws the patriarchal mindset persists and looms large amongst the legislatures many of whom are feudal lords themselves.

Such types of barbarities are unheard of in the 21st century as in Pakistan women continue to suffer atrocities in the name of traditions and culture. Be it Sawara or Wanni (girls given away as compensation) or killed in the name of honor. Women are denied their right to education, inheritance and even right to choose their life partner in the ultra-conservative society. It is unfortunate that the patriarchal mindset prevalent in the society equates a women’s body with their honor and prestige in the society. Killing in the name of honor is infact encouraged and deemed a duty of a man if he “believes” that his wife, daughter, sister or mother has crossed line and brought shame to the family’s name. The woman is considered to have brought shame for exercising her right to marry of free will as guaranteed under constitution and religion. Those who help these women are also given exemplary punishment to “teach the rebel girls a lesson.”

More than 7,010 cases of Violence against women have been reported in the year 2015 according to Aurat Foundation, a right based organization working for Women empowerment. Pakistan’s performance in terms of the Gender Inequality Index (GII) is also one of the worst in the world. The persistence of violence against women in Pakistan reveals the failure of the judicial system which is affected by a strong feudal system, religious and social taboos, traditions, customs, a homogeneous religious society, a vast gender gap and a policing system and sexual discrimination in economic and social activities. Thus honor related crime generally go unreported.

In contrast to the formal justice system where the aggrieved files a report with the police against the accused, in the jirga system the alleged accused or the guilty individual, family or tribe has to ask for the tribal jirga. The parallel system thus perpetuates atrocities by allowing the guilty party to defend its rights instead of the other way round. The victim if he/she is not influential does not stand a chance of getting justice under the Jirga system. The system traditionally is headed by the influential to protect the rich powerful and to help them get away with murder.

The Senate passed Anti-Honor Killings Laws (Criminal Laws Amendment) Bill in 2014, amending the Pakistan Penal Code 1860, and the Code of Criminal Procedure, 1898, to address the loopholes and lacunae in the existing laws. However the law, like its predecessors, is neither implemented nor enforced. The police are often unwilling to enforce the law due to the overwhelming social acceptance of the act and the influence of power holders. Although Pakistan enacted a law in 2004 against honor killings, the problem is far worse than the fundamental players of the justice sector know. The police end up functioning as agents not of the State that employs them but of the elite who exercise real political and economic clout. When a Sardar, elder of a tribe, presides over a jirga he sends the police a razinama (compromise) resulting from the settlement every member of the jirga including the police is paid a hefty amount. Given the economic interest how can the police be expected to report the holding of jirga?

According to Justice ( R ) Naisra Iqbal, a retired judge of Lahore High Court, Jirga is a purely male institution which neither sanctions women as members nor as witnesses or as complainants. The judgments passed by the jirgas are based on customary practices and are often illegal on the standard of Common law and Shariah Law principles, especially on issues related to the control of women’s sexual and moral lives. The Jirgas consider women as commodities, to be exchanged and murdered to settle disputes or to earn money and respect for the family. Feudal lords, politicians, police officers, the bureaucracy and parliamentarians; all join hands to keep the tribal justice system alive and flourishing, because all collectively and individually benefit from such a system.
The losers and sufferers of the verdict are the women, who are only called for the pronouncement of judgment by the Jirga. Women may access a jirga only through a male relative. In case of grievances against her male relatives, there is no recourse whatsoever.
.
Increasingly, jirgas are moving away from restoring tribal traditional norms as status quo, and are fast becoming money making enterprises. Nazish Brohi in her report titled “Women, Violence and Jirgas Review study for the National Commission on Status of Women” all jirga members get shares from the fines imposed, with large portions for the ameens (guarantors) and judges. If the conflict occurs between tribes, it is the head of the tribe, the Sardar who pays the amount, for other intra community conflicts, it is the parties involved. The tribal chiefs/ sardars usually receive a share from the compensation amount paid in cases of honor killing, usually one fourth of the total settlement. Some charge the amount as ‘autaq kharch’ (costs associated with hosting the assembly) or saying the money had to be paid to the police. According to Massoud Ansari, “Many of the Sardars today depend largely for their survival on the income they generate from heading jirgas”.

The public attitude to honor killing is also alarming. Recently, Sharmeen Obaid Chinoy’s Oscar winning documentary A Girl in the Riverthat explores the subject of honor killing was screened at Islamia College University Peshawar. The audience constituted of the boys and girls, of English literature. Reportedly, the male students started cheering and clapping when the father killed his own daughter, in the presence of their female colleagues.

In 2012 the Supreme Court of Pakistan declared Jirgas to be illegal and unconstitutional however as the country’s judicial system work within the fringes of the urban society the barbaric customs of Honor killing and giving girls away in compensation continue to persist. The denial of fundamental right to access to justice has forced many to invariable revert to the illegal system to seek justice albeit faulty on many levels the system perpetuates its atrocities through centaury old cultural and traditional standards or grund norms.

It should be of concerns to the authorities that in addition to the jirga system that are limited to rural areas a new trend is also seeping into the urban centers where illegal Islamic shariat courts are springing up that are allegedly dispensing justice. If the trend prevails the day is not far when the state will completely loose it writ and anarchy ensues. It is high time that the states actively enforces anti Jirga laws and bring punishes the perpetrator and member of Jirga to do away with system once and for all. In order to deter and prevent honour killings in Pakistan it is necessary to ensure access to justice for every citizen of the state and justice is dispensed with expeditiously and without delay.

There is a need to conduct a thorough and independent judicial enquiry into this case so that the facts can be revealed. In a case where girls are murdered on the pretext of honour killings it is absolutely vital that such a heinous crime be investigated and the perpetrators punished to the fullest extent of the law.

THAILAND: TLHR lawyer Sirikan Charoensiri’s case to be transferred to public prosecutor on 12 May 2016 »