The National Human Rights Commission is a specialised statutory body mandated to protect, promote and fulfil human rights. Set up by virtue of the Protection of Human Rights Act, 1993, the NHRC is the result of India’s pre-emptive commitment to United Nations General Assembly resolution 48/134 of 20 December 1993, also known as Principles relating to the Status of National Institutions (The Paris Principles). The affirmative vote India cast today in support of the protection and promotion of human rights in Sri Lanka, concerning the UN resolution for reconciliation and accountability in that country, is an example to the country’s commitment to human rights. India is the only country in Asia that supported the UN resolution. 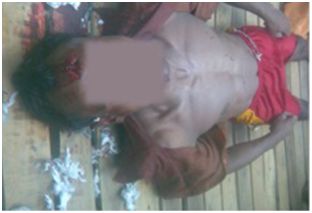 Over the years however, the NHRC and its subordinate constituents have only occasionally shown tendencies to fulfil their legal mandates. More often, the experience is the sad reality that the institution behaves as if it is just a component of an elaborate window dressing project, which the government rolls out from time to time concerning human rights in India. The latest decision of the NHRC concerning the case of brutal execution of a person at the Indo-Bangladesh border confirms this.

The incident happened at about 5 am on 24 July 2011. Mr. Mohammed Rafikul Islam, aged about 35 years, from Ufarmara village under the jurisdiction of Patgram Police Station, Lalmonirhat district in Bangladesh was first stoned and later assaulted by the Border Security Force and killed. The BSF attacked Rafikul when he was illegally crossing the Shaniajan River near Bamdol village from India to Bangladesh. Odhikar and MASUM, two reputed organisations in Bangladesh and India investigated the incident and found it to be true. Dr. Motachib, Dr. Mehedi and Dr. Biswas who conducted an autopsy upon Rafikul’s body at Sadar hospital, Lalmonirhat on 25 July 2011 confirmed that Rafikul died from multiple head injuries caused from hitting with hard objects like stones and sticks. A case is registered at Patgram Police Station on 24 July 2011 concerning the incident and is under investigation.

The AHRC issued a statement AHRC-STM-138-2011 on 6 October 2011 on the case. The NHRC considered the statement a petition and registered a case, numbered 1133/25/6/2011-PF. The NHRC then directed the petition to be inquired by the Director General of the BSF. The DG BSF filed a report dated 24 January 2012 to the NHRC. The report mentions about a squabble between the BSF and the Border Guards Bangladesh on 24 July 2011 concerning Rafikul’s death. The NHRC’s order also mentions about a protest note sent by the BGB to the BSF concerning Rafikul’s death and a reply sent by the BSF to the BGB. The NHRC received a copy of both these letters, accepted the refusal of the incident by the BSF, and dismissed the complaint! A copy of the order is available here.

The order does not indicate, neither has the NHRC undertaken an independent investigation concerning the incident. This however is not the first instance where the NHRC has concluded cases without independent inquiries. The AHRC and MASUM are on receipt of many such decisions from the NHRC, concerning cases that they have brought to the Commission’s attention. In addition, Section 19 of the Protection of Human Rights Act, 1993 does not permit the NHRC to issue an order ‘acquitting’ the BSF in a complaint. Upon receipt of a complaint concerning the armed forces, the NHRC must call for a report from the ‘government’ concerning the incident, and decide what actions it should follow. The NHRC could then either decide to recommend to the government actions that should follow, or drop the case. ‘Acquitting’ the respondent is no option and so is BSF not ‘the government’.

Over the past ten years MASUM and AHRC have transmitted to the NHRC about 300 cases of custodial violence from West Bengal. At least 88 of them are concerning extrajudicial executions reported from West Bengal. Most of these cases are treated by the NHRC in similar fashion, that today it confirms the belief that the NHRC does not have adequate investigative apparatus or an initiative to constitute this and entertains complete indifference for protection of human rights.

In several cases, the NHRC palms off the case to the state human rights commissions, which in states like West Bengal only has an ‘acting chairperson’ since the past four years or in some states are non-functional due to long pending appointments. There is an allegation that the WBSHRC is a farcical institution that has sought and appointed members to fit political interests than their human rights commitments.

The Protection of Human Rights Act, 1993 provides enough authority to the NHRC and its state components to undertake investigations concerning complaints of human rights abuses. Just like a civil or criminal court, the Commissions could seek and obtain reports, undertake independent investigations and summon and examine witnesses. In addition, the Commissions could also study treaties and legislations and advise the government, measures to be adopted to fulfil human rights mandate, as per the constitution as well as the country’s treaty obligations under international human rights law.

Over the past years, the NHRC has consistently proved that it is ineffective to protect, promote and fulfil human rights. It has repeatedly failed to protect human rights defenders at risk, an alarming concern reflected in the UN Special Rapporteur on the situation of human rights defenders, in her report to the 19th Session of the UN human Rights Council. A consortium of human rights organisations in India and abroad, including the AHRC, have raised this issue when the accreditation of the NHRC came up for hearing in 2011. This is reflected in the Chairperson’s despicable stand promoting capital punishment, which was condemned by human rights organisations.

Yet, all of these powers are of no use, should the Commissions, as it is in the case of the NHRC according to the experience of the AHRC and MASUM, decide to be inactive, be insensitive and biased, favouring the state and its agencies. The travesty and inattention with which the NHRC initiates complaints is evident from its considering of everything that it receives from an organisation as a petition.

The AHRC on 19 December 2011 issued a statement concerning the conviction of Mr Filipp Kostenko, a human rights activist in Russia by the Kuybyshev district court in Saint Petersburg. The statement AHRC-STM-209-2011 is titled RUSSIA: Kostenko trial, a ghost from the communist past. The NHRC along with thousands of others in the AHRC’s mailing list received the statement. The NHRC however considered the statement a petition, numbered it 181542, proceeded to hear it suo mottu, and not surprisingly dismissed it on 17 January 2012 ‘in limine’. Waste of time and resources due to lack of professionalism and commitment to work.

The NHRC’s order in Rafikul’s case however has a different dimension as well. The NHRC could have dismissed the case due to lack of evidence at the most, though it did not bother as usual to collect and appreciate it. Instead, the NHRC has ‘found’ that the BSF is not responsible for Rafikul’s murder, indirectly meaning that the petition is concocted. The intriguing question however is, based on what could the NHRC come to such a finding? There is no reasoning attributed to this in the NHRC’s order.

If it is to assume that the NHRC’s reasoning is based on the report filed by DG BSF, then there are a few questions one could ask. What is the rationale of the NHRC to conclude that a statement provided by the respondent in a case is always true? If that is the case, then why should there be an NHRC on the first place? Whenever the victims approach the BSF with a complaint, it is a similar report that the BSF provides to the victims, accusing them of fabricating complaints. So how is the NHRC different from the BSF or other state agencies? Does the NHRC have a different understanding about the term ‘independence’?

Most people who approach the NHRC are the poorest of the poor. That is precisely why the procedures for filing a complaint before the NHRC are kept simple. Additionally, a substantial number of cases filed at the NHRC are against the government. The NHRC has a legal as well as moral duty to ensure that a thorough inquiry is undertaken in every complaint that it receives, and adjudication undertaken with absolute independency, legal norms the institution is expected to uphold. Should the NHRC lack resources to undertake this, it is the duty of the NHRC to demand it from the government. It equally has a legal responsibility to monitor and correct if required the functioning of the state human rights commissions. Instead what is visible so far is nothing more than quackery in the name of justice.

About AHRC: The Asian Human Rights Commission is a regional non-governmental organisation that monitors human rights in Asia, documents violations and advocates for justice and institutional reform to ensure the protection and promotion of these rights. The Hong Kong-based group was founded in 1984.
About MASUM: Banglar Manabadhikar Suraksha Mancha (MASUM) is a human rights organisation operating in West Bengal, India.
For information and comments contact:
In Hong Kong: Bijo Francis, Telephone: +852 – 26986339
Email: southasia@ahrc.asia
In India: Kirity Roy, Telephone: + 91 9903099699
Email: kirityroy@gmail.com
Picture provided by: MASUM