This report has been prepared on the basis of THRD Alliance Chairperson Dipendra Jha’s field visit to Bhardah, Saptari District. 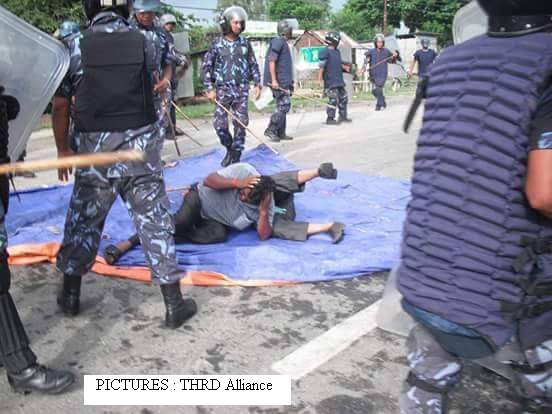 On August 17, a day before the Bhardah police fired shots at the protesters, tensions ran high between the police and the protestors. In the evening, the superintendents of police of the Nepal Police and the Armed Police Force met with Saptari District Chairperson of the Federal Socialist Forum-Nepal Dinesh Yadav and FSP-N Central Committee member Shailendra Shah, who were both leading the protest. The officials urged them to ease the strike so that 100-150 vehicles stranded in the area could use the road and obtain passage.

Next day, August 18, at around 8 a.m., the protestors began erecting a tent on the road, with a clear intention of blocking the road to enforce their general strike. At that moment, Inspectors of District Police Office, Saptari, Amat Lal Majhi and Meghraj Thapa arrived on scene and began beating the protestors. Other protestors ran away from the spot, but Yadav and Shah did not. Then a group of around a dozen police personnel surrounded the two local leaders and began raining batons on them. This action of the police infuriated the locals, who felt humiliated. The locals called in people from the nearby village to protest against the police brutality. As a large mass gathered from the villages, they started pelting stones at the police, forcing the police to retreat. Villagers continued to pelt stones at the police even when they retreated to their office.

Then the police, without giving any warning, started firing live bullets at the protestors. Rajiv Raut, who was killed in the police firing, was half a kilometer away from the protest site and was just a curious onlooker. He fell to the ground after receiving the first bullet in his chest. The police blocked the area, which prevented people from taking him to the hospital. 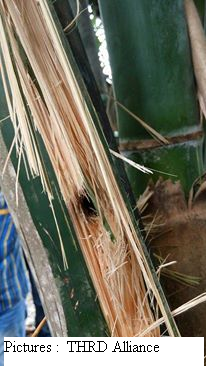 Some of the bullets aimed at the protestors hit nearby houses, making holes in the roof, walls, and other structures. One bullet, which hit a bamboo tree, made a huge hole in it.

Around 10 people were injured in the firing. Vijay Thakur, a local CPN-UML leader, who was not part of the protest, sustained a bullet injury in his leg. A police officer beat Ashok Yadav, an FSP-N youth leader, when he was being transported to hospital in an ambulance.

The government of Nepal must ensure peace in Nepal’s Terai and in other regions where protests have arisen. Disruption of protests, using police violence, is not peace. Use of firearms should have been a last resort. And, following international practice, as a last resort, protestors should have been shot below the legs. Evidence shows the police fired indiscriminately, hitting even innocent bystanders. The police officers involved in these shootings should be suspended without delay. An independent investigation committee should probe the shootings, especially in Surkhet District where there were three deaths, and in Bhardah, where Rajiv Raut was killed. The Minister for Home Affairs Bamdev Gautam, notorious for cracking down on peaceful protesters, must resign on moral grounds.