AHRC TV: Torture within the region in JUST ASIA, Episode 177 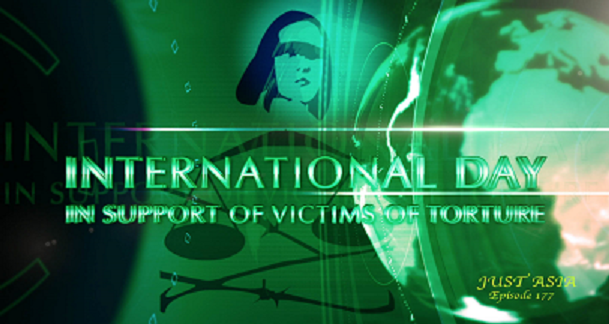 This week Just Asia focuses on the situation of torture in Asia, in commemoration of the International Day in Support of Victims of Torture.

Beginning with Pakistan, the UN Committee Against Torture has condemned the widespread practice of torture in the country and called on the government to enact urgent reforms. The government however, is claiming that it does not need a specific torture law, as the country’s current laws are in line with Convention provisions. Just Asia speaks to lawyer Javeria Younes to learn more.

Next, the widespread use of torture continues in Sri Lanka, despite the ratification of the Convention against Torture and the enactment of local laws. This is largely due to the defects in Sri Lanka’s legal and justice system. Just Asia speaks to Basil Fernando, Director of Policy and Programme Development at AHRC, for more information.

In India, Urmila Pullat, India Desk Officer at the AHRC speaks to Henri Tiphagne, the Executive Director of People’s Watch, an organisation that undertakes a holistic approach to human rights violations and works on behalf of victims of torture. As India underwent its Universal Periodic Review at the UN Human Rights Council this year, the subject of India’s non-ratification of the UN Convention against Torture was taken up as a concerted campaign.

Moving to Nepal, police officers in the country continue using torture to further their own criminal intentions. Torture is also used as a way of social control of minority groups, and as a show of power. Although Nepal has ratified the Convention against Torture, torture is still not a criminal act in Nepal. Perpetrators thus continue to walk free and work in police stations with impunity.

Similarly, 19 years after Indonesia’s ratification of the UN Convention against Torture, the government has yet to enact a domestic law to punish torture. Although the President issued government regulation Number 92 of 2015, it does not ensure remedies for torture victims. Police are the most frequent actors of torture, usually committing torture to obtain forced confessions of crimes. Just Asia speaks to Chris Biantoro, Indonesia Desk Officer at AHRC, to learn more.

Finally, Bangladesh’s law enforcement agencies have institutionalized torture within their day-to-day operations. Policing, maintaining law and order, and conducting crime investigations, all incorporate torture as an integral part. Victims of torture hardly get access to a complaint mechanism, while the police refuse to register complaints against its own personnel for committing such heinous crimes.

« INDIA: What has been done to prevent criminals serving in the state police?