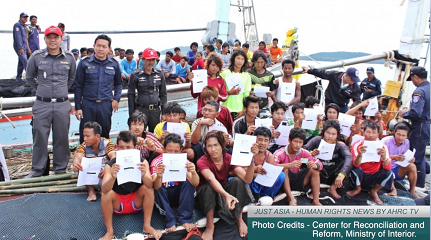 This week Just Asia begins with the attack on a peaceful public protest in North Sulawesi, Indonesia on June 1, calling for professionalism by parliamentarians, and the prosecution of those involved in illegal drugs. While waiting to have a dialogue with some parliamentarians at the Manodo parliament office, the student protesters were suddenly attacked by police officers and parliament staff. Five protesters were hospitalized, and one was taken to the emergency unit. To learn more, Just Asia caught up with human rights lawyer Ainul Yaqin.

Moving to India, a sensational encounter between the police and a semi-religious cult left at least 29 dead in Mathura, Uttar Pradesh on June 2, including two senior police officers. The police were attempting to enforce a high court order to evict members of the Azad Bharat Vidhik Vaicharik Kranti Satyagrahi, who were illegally occupying a public park for more than two years.

In Pakistan, a country that proudly claims its place in a nuclear club with the world’s powerful states, two recent cases of girls being burnt alive have surfaced. On June 1, 19-year-old Maria Sadaqat was burned alive in Punjab province for refusing to marry her suitor, the son of a school principal who had employed her as a teacher. On April 29, 16-year-old Amber was drugged and set on fire on the orders of an illegal jirga, for helping her friend elope in Khyber Pakhthunkwa province.

Moving to Thailand, Prime Minister Prayut Chan-o-cha pledged on June 6 to speed up investigations into human trafficking cases, most of which involve government officials. For more information, Just Asia speaks to Papop Siamhan, Coordinator of the Anti-Labour Trafficking Project.

Next, the Asian Legal Resource Centre urged the UN Human Rights Council to initiate the reengineering of Asia’s justice institutions in the 18 written submissions it made to the 32nd Regular Session of the Council. The group emphasized that the Council needs to review its rights mechanism considering the victims’ requirements of protection in today’s global context. To learn more, Just Asia interviewed Md. Ashrafuzzaman, who officially represents the group at the United Nations.