The Asian Human Rights Commission (AHRC) wishes to mark 31 May 2016 as an important date in Thailand’s history with respect to the protection of human rights defenders. On this day, the Provincial Court in Thailand, Northeast, delivered its official verdict, convicting two military officers accused of violent assault against villagers who opposed a mine project. The Appeal Court has dismissed lawsuits filed by the mining company against the activists. 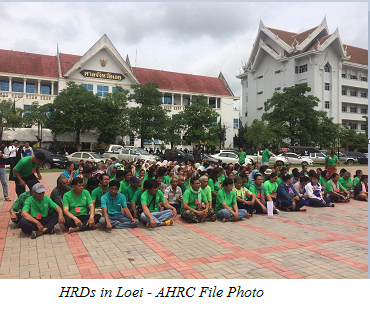 On 31 May 2016, the Community Centre Resources Foundation (CRC) and Legal Centre for Human Rights reported that the Provincial Court of Loei sentenced Lieutenant Colonel Poramin Pomngag and Lieutenant General Porameth Pomngag to three years and two years imprisonment respectively, for physical assault, unlawful detention, and the carrying unauthorised weapons. The two were convicted for involvment in an incident known as“Black May”, which occurred on the night of 15 May 2014.

The AHRC issued an Urgent Appeal (AHRC-UAC-073-2014) in relation to the case. What happened was that a group of approximately 100 unidentified armed men wearing black clothes entered the area of Nanongbong Village in Loei Province. The armed men attacked the villagers and took 30 villagers hostage, including two of the key leaders involved in the struggle against a mining operation, namely Mr.Surapun Rujichaiwat and Mr.Yon Khunna.

The hostages were placed face down on the ground and their hands and feet were bound. The barrier that the villagers had constructed to block access to the mine, operated by Tungkum Company Limited, was destroyed and trucks were seen transporting materials from the mine.

The villagers were released at 4a.m., and they reported to others of being assaulted and threatened with guns as well as having their hands and feet being bound. When other villagers called the police, only two policemen were sent to aid them, and even these personnel turned back once they saw the large number of armed men. To date, the identity of the armed men who entered the village is unknown; there has been no attempt by authorities to hold them to account.

Om the same momentous day, with respect to another case, the Loei Provincial Court read the verdict of the Appeal Court to dismiss charges against Mr.Samai Pakmee, Chairman of Khao Luang Sub-district Administration Office, and Mr.Konglai Pakmee, Nanongbong Village Chief. The two were accused by Tungkum Company Limited for unlawfully erecting a checkpoint in the Village to barricade trucks from the mining operator to transport mineral ores and putting up a banner saying “this village does not want a mine” on the Village gate.

Additionally, the AHRC also issued a statement (AHRC-STM-041-2016) and a press release (AHRC-PRL-005-2016) which disclose that Tungkum Company Limited was seeking 50 million Baht reparation, with 7.5% interest in a civil defamation lawsuit, from six Khon Rak Ban Kerd Village leaders, including Mr.Samai Pakmee, Mr.Konglai Pakmee, and Mr.Surapun Rujichaiwat, over a banner they erected at the entrance to their Village.

However, on 30 March 2016, Loei Provincial Court dismissed this case and also ruled that the villagers have been affected by the mining operations so they have the right to state their concerns against the company.

There has been clear evidence of the detrimental effects of the mines on the health, agriculture, and livelihood of the surrounding villages. A report released in February 2009 by Thai government officials warned residents to refrain from drinking the local water or using it to cook, due to elevated levels of cyanide, arsenic, cadmium, and manganese. Additionally, blood tests of local people also showed the level of toxic heavy metals far exceeded safe standards, while water, soil, and farmland were found contaminated with heavy metals.

The effect of this serious situation led the formation of a group of human right defenders. In 2007, villagers from six communities surrounding the mine in Wang Saphung District of Loei province established the Khon Rak Ban Kerd group; they started to call for a clean environment and opposed the mining operation conducted by the Tungkum Company Limited. Since then, the Khon Rak Ban Kerd group and villagers have been facing death threats and judicial harassment due to their promotion of community rights in the region. The Community Resource Centre Foundation (CRC) and Legal Centre for Human Rights, as a legal representative of the villagers in the dispute with Tungkum Company Limited, have stated that the company earlier filed nineteen lawsuits against human rights defenders and villagers. Eight of these have been withdrawn in exchange for permission to the company to transfer some of the ore that had already been mined by the company.

The AHRC wishes to point out that on 17 December 2015 Thailand also joined 126 other states at the UN General Assembly in adopting General Assembly Resolution 70/161, which recognizes State responsibility to protect human rights defendersbeing subject to attacks, threats, and other abuse by non-State actors. Thus, in relation to the “Black May” incident, even though the two defenders have been punished, other100 unidentified armed men have not yet been charged, which means that the State has yet failed to protect defenders in Loei province and the impact will also serve to make other human rights defenders feel unsafe.

In addition, the AHRC also wishes to state that the villagers have a right to public participation; they have a right to inform the public and authorities about the issues facing them. With regard to the dispute between the villagers in Loei province and Tungkum Company Limited, their right to freedom of expression is protected under Article 19 of the International Covenant on Civil and Political Rights (ICCPR), to which Thailand is a State party. Hence, governments should recognize the important and legitimate role of human rights defenders to express their views. Meanwhile, the Tungkum Company Limited should drop all charges against the human rights defenders and end this outrageous legal campaign against fundamental freedoms. The Company should be more mindful towards the environment and community that it is affecting. The AHRC finally still calls on concerned parties to take action on behalf of the human right defenders fighting against the negative effects of mining in Loei province.