The Asian Human Rights Commission (AHRC) has received information regarding the attack by members of the Mobile Brigade of the Nabire District Police on three Papuans in Nabire. The Papuans were attacked following a petty dispute between them and the officers at Kalibobo futsal pitch. One of the Papuans was stabbed in his back with a bayonet whereas two others were taken to the police station. One of them was stabbed with a bayonet in his left eye brow. 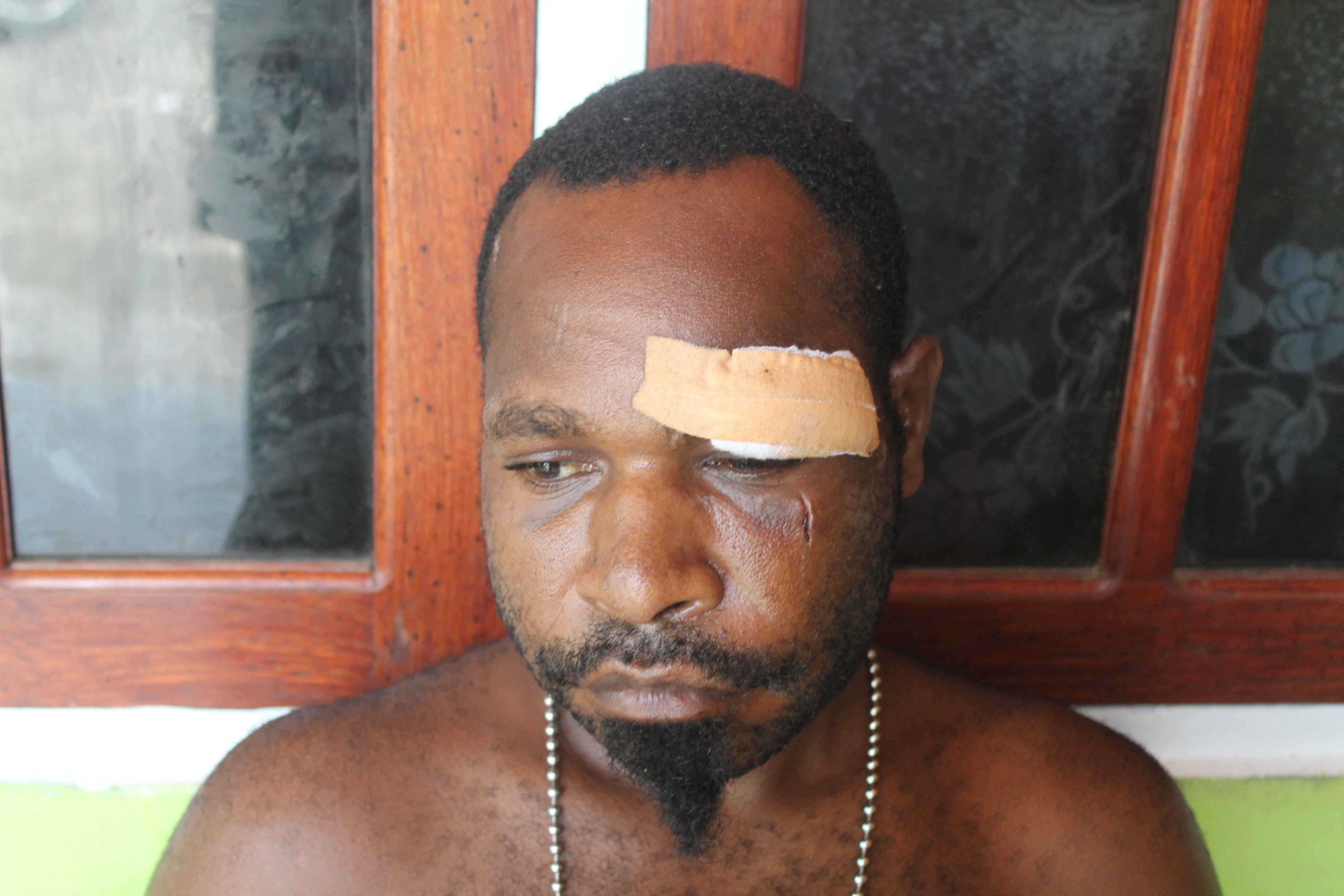 According to an activist of KINGMI (Gospel Tabernacle Church) Papua, Gilion Somau visited a futsal pitch in Kalibobo, Nabire, in the morning of 14 March 2014. Gilion and his two brothers, Jery Somau and Nicolaus Somau, were waiting for their turn to play futsal (mini football) in the pitch which at that time was used by several officers attached to the Mobile Brigadier of the Indonesian National Police. Gilion Somau mentioned in an interview that he and Jery did not disturb the officers who were playing futsal. The officers, instead, provoked them by yelling ‘hey, hey, hey’ at them which was welcome by Jery with a similar response. Offended by such response, around 20 police officers assaulted Jery. As a result, Jery’s eyes and nose were bruised and his lips were bleeding. Gilion, meanwhile, attempted to run for his life. It was reported that one of the officers opened fire when the chaotic event happened. (Photo: Gilion Somau was taken to Nabire District Police, put in a dark cell, and stabbed on his eyes by unidentified police officers. Courtesy of KINGMI Papua) 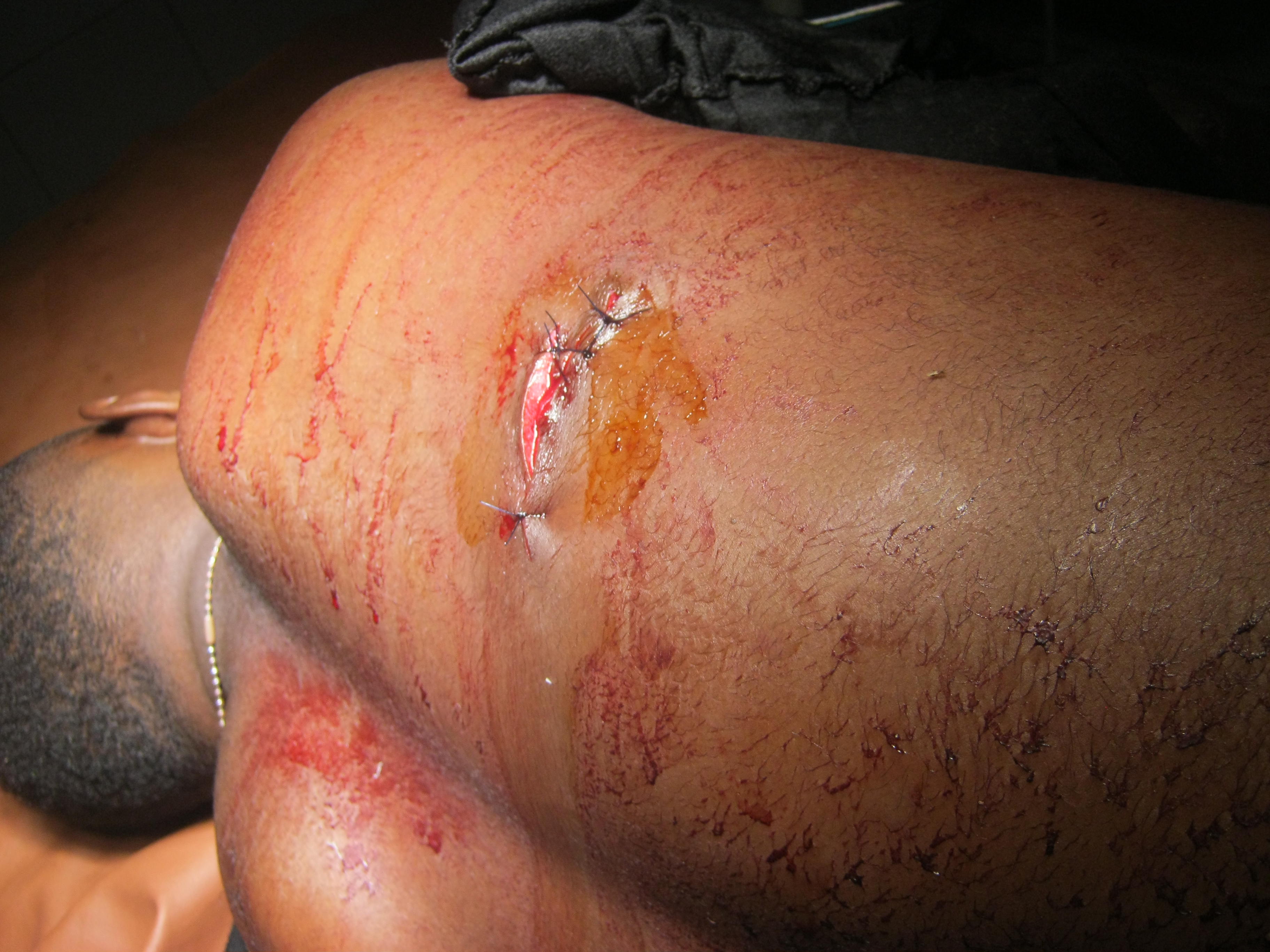 Gilion and Jery’s brother, Nicolaus Somau, was outside the futsal pitch when the incident took place. He was about to enter the futsal pitch when an officer stabbed him with a bayonet in his back. The local activist reported that, following the incident, more police officers in two trucks and several patrol cars arrived and start firing. The police managed to arrest Gilion and Jery and took them to Nabire District Police station. Gilion was put in a dark cell where an officer stabbed his bayonet into his left eye brow. According to Gilion, the officer wanted to take his eye ball out but his superior prevented him from doing so. The officer also tried to stab his head with a bayonet twice. Gilion, however, managed to stop it but suffered two minor cuts and the little finger of his left hand was wounded. (Photo: Nicolas Somau was stabbed with a bayonet in his back after involved in a petty fight with several police officers. Courtesy of KINGMI Papua)

Meanwhile, injured Nicolas Somau was taken to Siriwini Public Hospital in Nabire by a stranger. He received 38 stitches in his back as a result of the stabbing perpetrated by an unidentified police officer. He had been taken home by the family and is currently receiving traditional medical treatment. On the next day, 15 March 2014, Gilion and Jery were released without charge.

The Chief of Nabire District Police, Tagor Hutapea, has confirmed that his subordinates were involved in a fight with several ‘drunk youths’ at Kalibobo futsal pitch. He has also confirmed that one of the youths was stabbed and received medical treatment at a public hospital in Nabire. However, he insisted that his subordinates were ‘forced to fight back as the youth group mugged them and set their two motorcycles to fire’. Yet such statement has not been supported by any proof or similar claim of the witnesses.

This is not the first case in Indonesia in which civilians are assaulted, shot, or tortured by police or military officers merely due to petty fights. Following their fight with five Papuan men in Degeuwo in May 2012, for instance, three police officers opened fire, resulting in the death of one of them and the injury of four others. Similarly, Irwan Wenda was shot dead by a police officer after the latter was offended with random statements delivered by the former. In August 2013, Bintang Papua journalist Andreas Badii was beaten on his head simply because he was teasing a police officer. Two months later, Nahor Stefanus Yalak was arrested and tortured for getting drunk and creating noise.

The Chief of the Indonesian National Police issued a regulation calling for all his members to respect human rights in 2009. Despite the astonishing articles under the regulation, police officers who perpetrated human rights abuses such as torture are hardly taken to the criminal court and criminally punished. The complaints from the victims are likely to end up being examined by the non-transparent internal monitoring mechanism within the police – the Security and Professionalism Division – or not being investigated at all. In rare occasions where the perpetrators are criminally tried and punishment, the sentences imposed are typically inadequate, ranging from only months to 5 years of imprisonment.

SUGGESTED ACTION:
Please write to the listed authorities below, demanding for their intervention in this case to ensure that the officers responsible for attacking Gilion Somau, Nicolaus Somau, and Jery Somau will be criminally punished.

The AHRC is writing separately to the UN Special Rapporteur on Torture and other Cruel, Inhuman or Degrading Treatment or Punishment.

I am writing to voice my deep concern regarding the attack by officers of Mobile Brigade of Nabire District Police against three Papuans at Kalibobo futsal pitch in Nabire, Papua. I have been informed that the Papuans were attacked following a petty dispute between them and the police officers who were playing futsal (mini football) at the pitch.

According to a local activist, Gilion Somau, Jery Somau and Nicolas Somau were waiting for their turn to play futsal at Kalibobo pitch in the morning of 14 March 2014. Gilion and Jery were waiting at the side of the pitch, whereas Nicolaus were waiting outside of the futsal pitch. Jery was somehow engaged in a verbal argument with the police officers who were playing futsal there and was beaten by them. As a result, his face suffered bruising.

Jery’s brother, Nicolaus Somau, was about to enter the futsal pitch and help his brother. However, he was stabbed in his back by an unidentified officer using a bayonet. He was taken to a hospital by a stranger and received 38 stitches in his back. More police officers later arrived and started shooting. Gilion and Jery were arrested and taken to Nabire District Police. Gilion was put in a dark cell where his left eye brow was stabbed with a bayonet. According to Gilion, the officer was attempting to take his eye ball out but he was prevented by his superior. The officer also attempted to stab Gilion’s head twice yet the attacks were blocked that Gilion suffered two minor cuts in his head and another one in the little finger of his left hand.

I have noticed that there are similar cases have taken place in the past. In May 2012, for instance, three police officers opened fire against five Papuan men in Degeuwo resulting in the death of one of them. Similarly, Irwan Wenda was shot dead by a police officer after the latter was offended with random statements delivered by the former. In August 2013, Bintang Papua journalist Andreas Badii was beaten on his head simply because he was teasing a police officer. Two months later, Nahor Stefanus Yalak was arrested and tortured for getting drunk and creating noises.

I am aware that the Chief of the Indonesian National Police issued a regulation in 2009 calling for all officers to respect human rights. I am concerned, however, that police officers who perpetrated human rights abuses such as torture are hardly brought to the criminal court and adequately punished.

I am therefore calling you to make interventions in this case by ensuring that police officers responsible for physically harming Gilion Somau, Jery Somau, and Nicolas Somau are investigated. An internal investigation by the Security and Professionalism Division of the Indonesian National Police should be held so that administrative sanctions can be imposed on those officers. However, such investigation should only be complementary – and not a substitute – to the criminal investigation.

I look forward for your positive and swift response on this matter.

« INDIA: Is the judiciary a panacea?

PAKISTAN: WAR condemns the kidnapping, rape and burning a minor to death »