The Asian Human Rights Commission (AHRC) has received information regarding the shooting of a Papuan by a police officer in Jayawijaya, Papua. It was reported that the officer was involved in a fight with the man who was suffering from a mental disorder. Two people who witnessed the shooting were beaten up and detained at a police station. 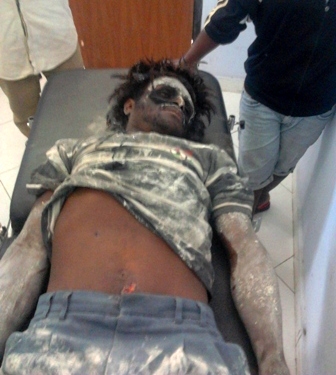 According to local activists, Irwan Wenda (elsewhere reported as Irwan Yanenga) was shot to death by a police officer on 8 August 2013 at 10.30 am in front of a cyber cafe on Ahmad Yani Street, 15 metres away from Jayapura Sub-District Police Station. The shooting was triggered by a fight between the officer and Irwan who was suffering from mental disorder. The cause of the fight remains unclear – it has been reported that the officer was offended by random comments from Irwan, whereas elsewhere it was mentioned that Irwan hit the officer with a piece of sugarcane. (Picture: Irwan Wenda was shot in different parts of his body, including the stomach. Courtesy of a local activist in Papua)

Following the fight between him and Irwan, Police Brigadier (Brigpol) Lusman Lua fired two shots into the air in order to ‘warn’ Irwan. He later tried to shoot Irwan in his legs but his attempt failed. Brigpol Lusman Lua then released more shots to Irwan’s stomach, head and left arm which led to his death. Lusman Lua opened fire at Irwan despite the suggestions from two witnesses who were present at that time that Irwan was mentally ill.

It was reported that two persons who witnessed the shooting were later taken to Jayawijaya Sub-District Police Station for interrogation and were allegedly subjected to ill-treatment. They were released in the evening following a protest raised by their family. Irwan’s body was taken to Wamena Public Hospital and at 5.35 p.m. on the same day the family came to fetch it.

In Indonesia, police officers are allowed to use firearms only for the purposes of law enforcement and under limited, specific situations. According to the Regulations of the Chief of the Indonesian National Police No. 1 Year 2009, the use of firearms or other lethal weapons should be ‘the last resort’ and should only be used in circumstances where there is an imminent threat to the life of police officers or other members of the society. In so doing, the police officers are obliged to take into account the principles of necessity and proportionality.

Despite such provisions under the regulation of the Chief of Police, there have been many reports on the arbitrary use of firearms by police officers against civilians. In a videodepicting the use of force by police officers against terrorist suspects in Poso which was released earlier this year, it was revealed that a suspect was shot after he had surrendered himself to the police. In some other cases, the use of such lethal measures was not even aimed at law enforcement purposes but was merely a result of petty fight between the officers and the civilians, reflecting the arrogance of the former. Following their fight with five Papuan men in Degeuwo in May last year, for instance, three police officers opened fire against the unarmed civilians which resulted in the death of one of them and injuries to four others.

Whereas there have been laws and regulations in Indonesia which prohibit police officers from employing lethal weapons arbitrarily, an independent mechanism to review the use of force by the police is still lacking as of today. The current regulation only requires the police officers who employ firearms to report to his supervisor, without any possibility from an independent team or body to examine whether the use of such lethal measures is actually in accordance with the principles of necessity and proportionality. As a result, the police officers who have used firearms and excessive force arbitrarily have never been held accountable and have been enjoying impunity.

In its recently adopted concluding observations on Indonesia, the UN Human Rights Committee expressed its concern on the use of force and extrajudicial killings by the police and the military. It recommended the government of Indonesia ‘take practical steps to put an end to impunity’ as well as to ‘systematically and effectively investigate, and prosecute cases of extrajudicial killings, punish those responsible; and provide adequate compensation to the victims’ families.’

SUGGESTED ACTION:
Please write to the authorities listed below, asking for their intervention in this case. Specifically, please urge the police to hold an effective and impartial investigation into the matter so that Brigpol Lusman Lua is punished in accordance with law and human rights principles. Please also use this opportunity to call upon the relevant authorities to establish an independent mechanism to review the use of force by police officers which is lacking today.

The AHRC is writing separately to the UN Special Rapporteur on extrajudicial, summary or arbitrary executions asking for his intervention in this matter.

I am writing to voice my deep concern regarding the shooting of a mentally ill Papuan by a police officer in Jayawijaya, Papua. I have received the information that on 8 August 2013 at around 9-10 a.m., Police Brigadier (Brigpol) Lusman Lua was involved in a confrontation with Irwan Wenda. What has triggered the fight between them remains unconfirmed as of today yet I have been informed that the fight has resulted in the shooting of Irwan to his stomach, left arm and head causing the Papuan man to die on the scene. I was told that, prior to the shooting two witnesses who were present at that time had informed Brigpol Lusman Lua that Irwan was mentally unstable. Instead of taking into account the witnesses’ suggestion, it was reported that the police officer later took them to Jayawijaya District Police for interrogation. They were released in the late afternoon on the same day, only after their families protested against their arrest. There has been an allegation that the two witnesses were subjected to intimidation and ill-treatment during the interrogation.

I am aware that the police in Indonesia are only allowed to use force and firearms for law enforcement purposes and in very limited circumstances. I wish to draw your attention to the Regulation of the Chief of the Indonesian National Police No. 1 Year 2009 one of which provisions emphasises that use of firearms and other lethal measures should only be used as a last resort in the situation where there is an imminent threat to the life of a police officer or other members of society. Bearing such provision in mind, I am concerned with the fact that there have been many reports on the arbitrary use of firearms against civilians by the police and that some of them are not even related to law enforcement. In May last year in Degeuwo Papua, for instance, one man was shot to death and four others were injured by three police officers following a petty fight between them.

In addition to this I am concerned with the extensive level of impunity enjoyed by the police officers who employed such arbitrary lethal measures against civilians. I wish to emphasise that my concern is shared by the UN Human Rights Committee in its latest concluding observations on Indonesia which was adopted recently. I am of the view that such impunity is possible partly due to the absence of an independent mechanism to review the use of force by police officers and to assess whether such measure is in accordance with the principles of necessity and proportionality. Instead, under the current provision, the police officer who has employed lethal measures and used firearms against civilians is only obliged to report to his or her supervisor without any possibility for any external body to challenge such action.

Based on this, I am calling you to establish an independent mechanism to review the use of force by police officers, in accordance with the UN Basic Principles on the Use of Force and Firearms by Law Enforcement Officials. As for this particular case regarding Irwan Wenda, I am calling you to hold an effective and impartial criminal investigation against Brigpol Lusman Lua that he is punished in accordance with law and human rights standards. Irwan Wenda’s families should also be provided with proportionate and comprehensive reparation.

I look forward for your positive, swift and adequate action on this matter.

PAKISTAN: Casualties of violence remained as high as 572 died and 642 were injured during the month of July »