The Asian Human Rights Commission (AHRC) has received information regarding the torture of a Papuan man by police and military officers. The victim was detained for 12 hours and subjected to beatings and whippings from which he suffered various injuries on his body. It has been reported that the victim now has difficulty in walking and using his right arm as a result of the assault. 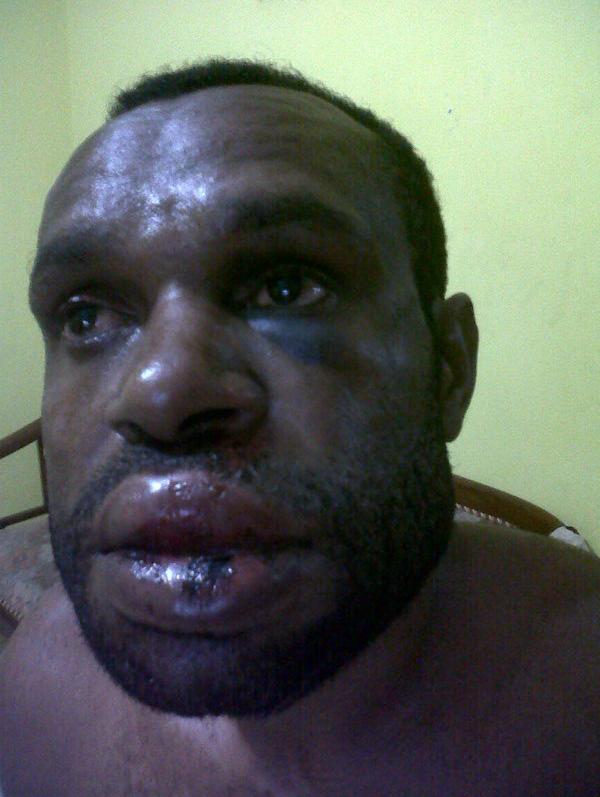 The Justice, Peace and Integrity of Creation Desk of Evangelical Christian Church in Papua (JPIC GKI) reported that in the evening of 26 September 2013, Nahor Stefanus Yalak visited his friend’s house in Perumnas III, Waena. He knocked on the door but, since there was no response, he started calling his friend’s name. At around 6 p.m., several police officers came and told Nahor that they had received complaints from the local residents who were annoyed by the level of noise Nahor was creating. It is suspected that Nahor was drunk. (Photo: Nahor Yalak is wounded on his face and other parts of his body, due to the assaults perpetrated by the police and military in Waena. Courtesy of JPIC GKI)

An hour later, the police decided to take Nahor to a small police station by Perumnas II in Waena where he was tortured by two police officers as well as two military officers. The officers beat and kicked Nahor on the back of his head, on his face, back and legs. A police officer tied Nahor’s hands behind his back and forced him to lie on his stomach, so that Nahor could not see the perpetrators. An officer who was wearing boots trampled Nahor’s hand whereas another one whipped him using a thick wire. The officers were also stamping on Nahor’s body while he was lying on the ground.

At around 8 on the same day, Nahor was taken in a police car and brought to Abepura Sub-District Police. He was detained there for few hours before being released the next morning on 27 September 2013. As a result of the physical assaults, Nahor is currently suffering from different wounds on his face and lips which prevent him from eating. Swollen wounds were found on his back, legs, and knees. The report sent by JPIC GKI also reveals that the assaults have made it difficult for him to walk and to use his right arm.

The AHRC has received a number of torture and police violence cases occurred in in different parts of Indonesia, including Papua. Andrea Badii, a journalist for Bintang Papua, was beaten up by three police officers following a small argument amongst them. Last week, the AHRC has issued an urgent appeal regarding the torture of teenagers and a young adult by police officers in Jakarta which revealed how beatings and electric shocks were applied to obtain confession from criminal suspects. The widespread practice of torture by Indonesian military and police officers has provoked criticism from different human rights organisations and experts, including the UN Special Rapporteur on Torture and other Cruel, Inhuman or Degrading Treatment or Punishment as expressed in his report visit in 2008.

In most of the cases, injustice for torture victims and their families does not only stop at the abuse itself but continues with the deprivation of their right to meaningful remedies. Although there is no law which prevents the victims from submitting criminal complaints against the perpetrators, the lack of independence and transparency in the available systems practically makes it very difficult for criminal and proportionate punishments against the perpetrators to take place. Under the current setting, police officers who have been involved in torture are to be investigated by their fellow police officers. Similarly, military officers who have been involved in such abuse are to be investigated and tried by their fellow military officers as stipulated under Law No. 31 year 1997 on Military Tribunal.

For further discussion on the challenges met by torture victims and their families in obtaining justice, please refer to AHRC’s special report: A facade of justice for torture victims in Indonesia.

SUGGESTED ACTION:
Please write to the authorities listed below asking for an impartial, transparent and effective investigation of the torture allegation in this case. Please emphasise to the authorities that any police and military officers involved in physical abuse should not merely be imposed with disciplinary sanctions but also criminally and proportionately punished.

The AHRC is writing a separate letter to the UN Special Rapporteur on Torture and other Cruel, Inhuman or Degrading Treatment or Punishment requesting for his intervention in this matter.

I am writing to voice my deep concern regarding the torture of Nahor Stefanus Yalak by two police and two military officers in Waena, Papua. According to the information we have received from the Justice, Peace and Integrity of Creation Desk of Evangelical Christian Church in Papua (JPIC GKI), Nahor was arrested by the police on 26 September 2013 at 7 p.m. The police arrested him after receiving complaints from the residents of Perumnas III on the noise that Nahor was making. It is suspected that Nahor was drunk.

I have been informed that Nahor was later taken to a small police station by Perumnas II in Waena where he was subjected to torture by two military officers and two police officers. It has been reported that Nahor was beaten up and kicked on his head, face, back and legs. His hands were tied and he was forced to lie on his stomach whilst the officers were stamping on different parts of his body. As a result of the physical assaults, Nahor was wounded on his face and lips and injured on his back, legs and knees. He is also having difficulty in walking and using his right arm due to the torture he had experienced.

Nahor was detained for the rest of the night of 26 September 2013 and was only released in the morning of the next day at around 7.30 a.m.

I am aware that torture is widely practised in different parts of Indonesia, including Papua, and I am saddened that there have been no serious attempts from the government to end such abuse despite criticism from various human rights bodies and the international community. I have been informed of the difficulties for torture victims and their families to obtain justice as the current legal setting for torture investigation is lacking of independence and transparency. I am aware that, under the current system, military and police officers who have engaged in torture can only be investigated by their own colleagues. As a result, torture complaints from the victims are hardly followed up. In the rare occasions when complaints manage to reach the court, the punishment imposed on the perpetrators is mostly disproportionate and does not reflect the gravity of the abuse.

I wish to emphasise that as a state party to the UN Convention against Torture and other Cruel, Inhuman or Degrading Treatment or Punishment, the Indonesian government has the obligation both to prevent and punish torture. The latter obligation requires the government not only to ensure that torture is criminally punishable but also to guarantee that the victims of such abuse ‘has the right to complain to, and to have his case promptly and impartially examined by, its competent authorities.’

Given the above, I am calling you to ensure that an independent and effective criminal investigation takes place in this case. I am aware that in previous cases, the authorities have tended to impose only disciplinary measures on state officials who have been engaged in torture. I wish to emphasise that such practice is not in accordance with Indonesia’s international human rights obligation. More importantly, I find that treating the abuse as merely an administrative violation is disrespectful to the victims and their families.