The Asian Human Rights Commission (AHRC) has received information regarding the torture of a journalist in Enarotali, Papua, by three police officers. The Chief of Paniai District Police has apologised to the victim and promised that he will take action against the three officers. It is likely, however, that the ‘action’ will be administrative and not criminal. 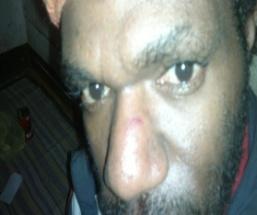 According to a local activist, on 15 August 2013 at around 4.30 p.m. a journalist for Bintang Papua Andreas Badii was riding his motorbike home after buying a wick for his oil stove when a police officer named Lukman stopped and searched him. When the officer found the wick inside Andreas’s bag, he asked what it was for. In a jokingly but polite manner, Andreas replied: ‘Ah, Uncle, you are just acting like you do not know.’ The police officer, who was a member of Paniai District Police, wast offended with Andreas’s response. He asked Andreas repeatedly: ‘are you opposing me?’ (Picture: Andreas Badii was beaten on his head so that his nose bled heavily. Courtesy of a local activist in Papua)

Andreas explained that he did not mean to oppose the officer and that the threads were only a wick for his oil stove. However, the officer responded by beating Andreas’s head which at that time was covered with a helmet. Two other police officers named Frendi Tomatala and Wellem Usior approached Andreas and also beat him on the face so that the journalist’s nose and lips were injured. One of the police officers pulled Andreas’s shirt from behind making him fall off his motorbike, and Wellem Usior also appointed his gun at Andreas. Andreas’s nose and lips were bleeding heavily but instead of taking him to a hospital for medical treatment, the three police officers took him to East Paniai Sub-District Police Station which is around 500 metres from the scene.

In the police station an unidentified officer explained to Andreas that they had been conducting a security operation since January 2013 and that they were all tired and suffering from lack of sleep. For such reason, the police officers tend to be aggressive. Andreas was later released after being held at the police station for around 30 minutes. Before leaving the station, he looked for the Chief of the Paniai District Police who was unfortunately not around at that time.

The following morning at 8.45 a.m., Andreas was about to go to Paniai District Police to file a complaint about the abuse when the Chief of the district police, Semmy Ronny Aba, called him. The Chief apologised for the bad behaviour of his subordinates and explained that since the Indonesian National Police have a set of code of conduct, a complaint from Andreas can be legally followed up. At 9.15 a.m. Andreas met with the Chief himself who later ordered the officers from the police’s internal monitoring unit to take his complaint.

In 2009, the Chief of the Indonesian Police issued a regulation which calls for all its members to respect human rights in implementing their roles and duties. According to Article 10 point c of the regulation, for instance, Indonesian police officers are prohibited from using violence, unless it is necessary to prevent a crime or to arrest criminal suspects. Yet despite the astonishing articles under the regulation, violence by police officers remains common as of today. As an example, in early August this year, a police officer shot a mentally ill Papuan to death even though the man did not pose any harm or involve in any criminal activity. Torture has also been reported to be rampant in Indonesia, with police officers marked as state officials who perpetrated the abuse the most.

Although many cases on torture and violence by the police have been reported, only a limited number of them ended in the criminal punishment of the perpetrators. The complaints which did not end up this way were either not followed up at all or were examined by an internal monitoring mechanism within the police, the Professionalism and Security Division. Critics have been addressed to such mechanism not only because it is lacking of transparency but also due to its administrative nature and how it is often used to substitute criminal proceeding. Such substitution is not in accordance with the UN Convention against Torture and other cruel, inhuman or degrading treatment or punishmentin which one of provisions requires the adequate punishment of the perpetrators under a criminal proceeding.

SUGGESTED ACTION:
Please write to the relevant authorities listed below asking for their intervention in this case that instead of being given administrative sanction, the three police officers who ill-treated Andreas will be criminally punished. Please also urge them to ensure that adequate reparation is provided to Andreas.

The AHRC is writing separately to the UN Special Rapporteur on Torture and Other Cruel, Inhuman or Degrading Treatment or Punishment, asking for his intervention on this matter.

I am writing to voice my deep concern regarding the torture and ill-treatment against a journalist of Bintang Papua by three police officers from Paniai District Police, Enarotali, Papua. I have been informed by a local activist that in the morning of 15 August 2013, Andreas Badii was riding his motorbike home when Bripda Lukman stopped and searched him. The officer found a wick in Andreas’s bag and inquired on what the journalist will used it for. Responding to such question, Andreas replied jokingly ‘ah, Uncle, you are acting like you do not know’ which was countered rather nastily by the officer. Bripda Lukman asked to Andreas, ‘are you opposing me?’ while the journalist was explaining that what the officer found was just a wick for his oil stove. However, Bripda Lukman hit Andreas on his head while kept asking ‘are you opposing me?’

Two other officers identified as Briptu Wellem Usior as well as Bripda Frendi Tomatala later approached Andreas and started beating him on his head so that Andreas’s nose and lips injured and bleeding heavily. One of the three officers pulled Andreas’s shirt causing him to fall off his motorbike whereas Briptu Wellem Usior appointed his gun at the journalist. Although Andreas was heavily bleeding on his lips and nose, the police officers did not take him to the hospital but to East Paniai Sub-District Police Station which was located around 500 metres away from the scene. Andreas was released on the same day after being held for 30 minutes at the station.

According to the information I have obtained, Andreas received a phone call from the Chief of Paniai District Police, Semmy Ronny Aba, who apologised for the behaviour of his subordinates. Apart from that, the Chief explained that the officers have breached the police’s code of conduct that he will take action against them. The Chief met his promised as after Andreas met him in the afternoon of the same day, the Chief ordered his officers from the internal monitoring unit to take Andreas’s complaint.

I appreciate the fact that the Chief of Paniai District Police has apologised to Andreas directly and also has ordered for the police’s internal monitoring unit (Provost) to follow up Andreas’s complaint. However, I wish to emphasise that this internal mechanism within the police should not be treated as the substitute for the criminal proceeding against the three police officers who have assaulted Andreas. What the officers have done to Andreas was not simply a breach of conduct but – much more serious than that – a crime and a human rights violation.

Bearing this in mind, an effective and impartial investigation on this case should take place that the three officers will be punished criminally in accordance with the law. The ongoing investigation under the Provost shall be continued and conducted transparently, but should not be considered as the substitute for the criminal proceeding. As a state party to the UN Convention against Torture and other cruel, inhuman or degrading treatment and punishment, I am calling you to comply with the obligation to ensure that the perpetrators of torture and ill-treatment are punished adequately and criminally, as required for the convention. In addition to that, I am urging you to ensure that adequate reparation is given to Andreas.

I look forward for your positive, adequate and swift response in this matter.

SRI LANKA: A Suggestion – To Change the Name of the “Law and Order Ministry” to the “Rule of Law” Ministry  »