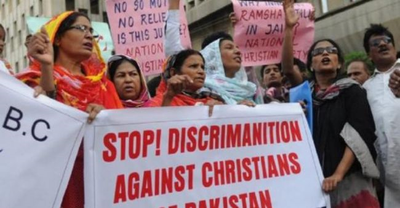 Freedom of religion is a fundamental right that exists only on paper in Pakistan. Each year thousands of Christians, forming 13% of the total population, suffer at the hands of religious bigots who use blasphemy as an excuse to ruin their life. Christian girls are increasingly being forced to convert to Islam. According to a report released by Pakistani NGO Aurat Foundation on 13 July 2015, around 1,000 girls are forced to convert to Islam every year in Pakistan. The victims of these forced conversions are largely girls from the Pakistani Christian and Hindu communities. Punjab province has become a hub of forced conversion; every time a case of gross injustice is reported in the media, Chief Minister Shahbaz Sharif merely orders an enquiry and subsequently the media frenzy is settled, while the victim remains without justice.

The Asian Human Rights Commission has received information of three forced conversions of minor Christian girls. On 9 November 2015, 13-year-old Sana John, a 5th grade student was abducted and forcefully converted to Islam in Haji Pura, Sialkot. Sana John was abducted and forcefully converted by Rambo, son of the local Muslim, who is now threatening Sana’s father Shahid John not to report the case, or his other daughter will be abducted as well. A kidnapping case, FIR no.933/15, was registered under section 356-B in the local police station on November 11 against Ali Hassan alias Rembo, Ali Raza Muslim, Razia Bibi (mother of Rembo) and Mohammad Bashir alias Nanha Qasai, but the concerned police did not take any legal action against the culprits. The police and local authorities have turned a blind eye and no one is helping the poor family in recovering their daughter.

In another case, a young Christian girl Agnes Shukat, daughter of Shukat Masih, resident of Lahore cantonment, was kidnapped on 20 November 2015 by Uzma, her Muslim employer and boutique owner. Though Agnes’s family had nominated Uzma in the FIR, a case of kidnapping was registered at the Lahore Cantonment police station against an unknown person upon duress from an army officer.

Kasur district, Punjab province is most prone to discrimination on religious grounds. It is the same district where a young Christian couple was burnt alive inside the brick kiln where they were employed. Even knowing the facts, the authorities have done nothing to protect the local Christian community under constant threat from the local majority populace. On 22 September 2015, a 22-year-old hearing impaired Christian woman was raped by her neighbor. According to the details, Safia Bibi was sitting inside her home when her neighbor M Umar, barged in and raped her. Upon pressure from local NGOs, the police arrested the culprit and FIR No. 271/15 was registered at the Raja Jang police station.

Pakistan’s Christian community is also systematically being denied freedom of expression and the right to propagate their religion. On 25 November 2015, the office of Gwahi TV, a Christian TV channel based in Karachi was set ablaze by unknown persons. In complicity with the arsonists, the police are trying to brush aside the incident as an accident caused due to a short circuit, despite clear evidence of burglary. The fire that lasted about half an hour burnt to ashes almost everything, including a Mac computer, DVDs, editing equipment, books, and records of their donors. Interestingly, the fire only destroyed valuable equipment leaving the blankets, curtains, wooden structure inside the office unscathed. The cameras used for video recording were missing, suggesting they were stolen by the arsonists. The locks inside the office were found broken, clear evidence of foul play, but the police insist it was an accident.

Pakistan has become a society religiously divided, rather than a nation united, after Islam was declared a state religion in the 1963 Constitution. The state has failed to give its minorities a sense of belonging, freedom and security. While the Constitution states that “subject to law, public order and morality, every citizen shall have the right to profess, practice and propagate his religion”, in practice discriminatory laws limit people’s freedom of religion. Similarly, freedom of speech is constitutionally subject to “any reasonable restriction imposed by law in the interest and glory of Islam”. The proverbial Damocle’s sword of blasphemy law has further eroded religious harmony and pluralism.

In blasphemy cases, the accuser also becomes the prosecutor, the judge and the executor, extrajudicially killing innocent victims at his own discretion, without any fear of punishment. On the contrary, he—a murderer—is garlanded as the heir of heaven. Following the murder of Mr. Justice Arif Iqbal Bhatti, judge of the Lahore High Court, by a fundamentalist for acquitting the accused in the famous case of Manzoor Masih and two others, the judiciary in Pakistan appears frightened to acquit under the pressure of strong militant organizations.

The state of Pakistan must play a pivotal role in including religious minorities and other vulnerable groups in the nation building process; no state in the world can survive or flourish by alienating its minorities. It is constitutionally, legally and morally incumbent upon the state to ensure freedom and safety of its entire citizenry, regardless of faith, color, creed or caste.