September 11, 2012 will remain etched in the collective memory of Pakistan. On that day 259 labourers were burned alive inside a garment factory. The incident is unprecedented in the industrial history of Pakistan, and was termed a 9/11 for the laboring class of Pakistan. The fire was caused by a short circuit and quickly engulfed the entire two-storey building of Ali Enterprises. The situation was exacerbated by the late arrival of fire tenders, the lack of fire hydrants, and traffic congestion. The fire injured 600 people and cost many others their source of livelihood. The garment factory “Ali Enterprises”, was located at Baldia Town, Karachi, and used to export its garments to Europe and the United States. 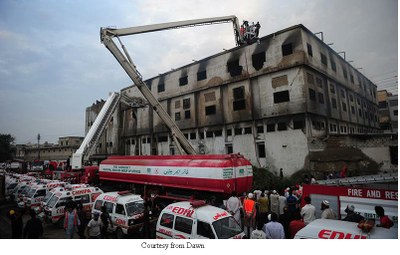 The factory manufactured jeans for the textile discounter KiK Textilien, which had claimed to ensure compliance with labour laws and the maintenance of safety standards amongst its suppliers.

Ali Enterprises had, just three weeks prior to the fire, succeeded in fraudulently obtaining an SA-8000 Certificate. This was awarded by RINA, an Italian certifying company, which entitled Ali Enterprises to carry out business with European and American manufacturers.

RINA, on its part, neither visited the factory nor checked on the working conditions or health hazards, and failed to look into the irregularities related to local labour laws and safety. In fact, according to the International Labour Organization, procedural barriers had been set in place inside the garment factory run by Ali Enterprises in Karachi to deny workers their rights. The Pakistani government has, with the help of the Joint Investigation Team (JIT) report, sabotaged the benefits for workers contained in Section 121 of ILO. As a result, two things have happened: the government does not have to follow up on the safety of workers and the companies will now be free from prosecution under the law. And, justice for the workers burned alive in the fire has been denied.

Through the pressure exerted by Pakistan Institute of Labour Education and Research (PILER), Hosiery Garments General Worker, other trade unions, and non-government organizations, KiK Textilian, a German Textile enterprise, had agreed to pay some compensation. One million US Dollars was distributed through the Sindh High Court to the families of the deceased. A contract was made between PILER and KIK. The KiK would also pay Long Term Care (LTC) to the bereaved families according to Section 121 of ILO.

According to the Pakistani Textile Workers Union (NTUF), the factory owner did not maintain international safety and working conditions standards. Unpaid overtime and employing child laborer were a norm. There were no provisions for escape in case of fire and health and safety measures were entirely ignored inside the factory that employed 1,500 people. The factory had four doors for entry and exit. At the time of accident, three of the four doors were locked from outside. Windows were laced with strong wire gauzes.

The apparel sector accounts for 65 percent of the entire economy of the country and employs 60% of the total skilled workforce. The total number of Pakistan’s labour force is 58.4 million, making it the 10th largest country in terms of available human workforce. About 20.1% of the labour force is involved in garment industry. The poor conditions under which Pakistan’s blue-collar labour works have often been raised by trade unions and workers’ rights organizations. There is also controversial widespread use of child labour in Pakistan.

Three years have lapsed since the incident, yet the heirs of the victims are yet to receive any compensation. Sindh Chief Minister Syed Qaim Ali Shah had promised to give a plot of land and a government job to one member of each affected family. However, they have got nothing. Prime Minister Nawaz Sharif, whose party was then in power in Punjab, had promised, on behalf of the Punjab government, to give Rs. 300,000 as compensation to every affected family. However, that promise was also not fulfilled. The government had promised to take solid measures for safety of workers in all factories and at workplaces, but that promise too was not kept. The KIK, a German label that ordered the manufacturing of garments from the ill-fated factory has already paid one part of the compensation, adding up to one million dollars. The label has exonerated itself from sharing further responsibility in providing the second phase of compensation for the families of the victims.

Three years on and three investigation reports later, the case is still directionless. The case took a dramatic turn just as the investigations were nearing completion. A report submitted in the Sindh High Court in February 2015 claimed that the fire was caused by an arsonist belonging to political party Muttaida Qaumi Movement (MQM) to teach the owners of the factory a lesson for refusing to pay extortion money. According to the Joint Investigation Team report, the MQM worker revealed that a “well-known party high official” had demanded Rs. 200 million as extortion money from Ali Enterprises.

Interestingly, the person whose confession has been made the basis of the report didn’t commit the crime by himself; instead he heard from other people about the involvement of the MQM in the case. Though the suspect disclosed the information on June 2012, the Rangers didn’t share the report until 6 February 2015. The delay cast a shadow of doubt as to the intentions of the Pakistan Rangers who are fighting for the control of the city with the MQM. The report was used to force the party to the negotiation table on Rangers terms and created political mire in provincial politics. The report also exonerated the owners of criminal culpability, jeopardizing the claims of compensation by the legal heirs of the victim.

Regardless of whether it was an act of sabotage or a short-circuit related fire, the factory owners cannot be absolved of their responsibility to protect their workers. In Pakistan, industrial plants and factories, especially those in the private sector, except a few multinationals, lack any sort of fire extinguishing/fighting arrangements. Electric short-circuits are occasionally blamed for fires; proper measures should be taken to upgrade the electric wiring and connections. After this tragedy, factories should ensure workers’ safety, get fire-fighting equipment, and make adequate emergency exits.

The Asian Human Rights Commission (AHRC) expects that the court will not overlook the inherent faults of this case. The owners should be held liable for not equipping the factory with proper fire extinguishing devises and not making fire drills compulsory for all workers. The criminal charges against the owners have been dropped, which has further eroded the sustainability for the claim of compensation. The owners were negligent and had wilfully kept the fire exits locked from outside which is a criminal act in and of itself.

« INDIA: Practicing untouchability is a crime, ‘not a social evil’