The Asian Human Rights Commission (AHRC) is concerned about the prolonged general strike that has made life very difficult in the southern plains of Nepal. Curfews have been set in Terai Districts to deter any untoward incidents. There is severe shortage of essentials and medicines. Shops and factories are closed. Daily wage earners have difficulty managing two meals a day. Protesters have set fire to the police stations and government offices. Due to fear of attack, the Armed Police Force (APF) and the Nepal Police (NP) have evacuated their personnel from some of its bases in the districts of Rautahat, Bara, and Parsa.

Locals are refusing to rent their houses to police and have been refusing to sell daily goods to them. This has made police life difficult. Government officials, including judges, are returning to Kathmandu due to the continuous attack on government offices by the protesters. The protesters have also targeted Nepali Congress and Communist Party of Nepal (Unified Marxist–Leninist) CPN (UML) party offices.

In Parsa, Bara, and Rautahat districts, the AHRC has found that the police have opened fire and even shot people in the back. The Local Administration Act has laid down steps that need to be followed for crowd control. In none of the protests in the Terai was tear gas or a water cannon used to disperse the mob; rather the security forces used lathis, and then immediately resorted to live ammunition. This shows the discriminatory attitude of the government of Nepal and its security agencies towards largely Madhesi protesters. 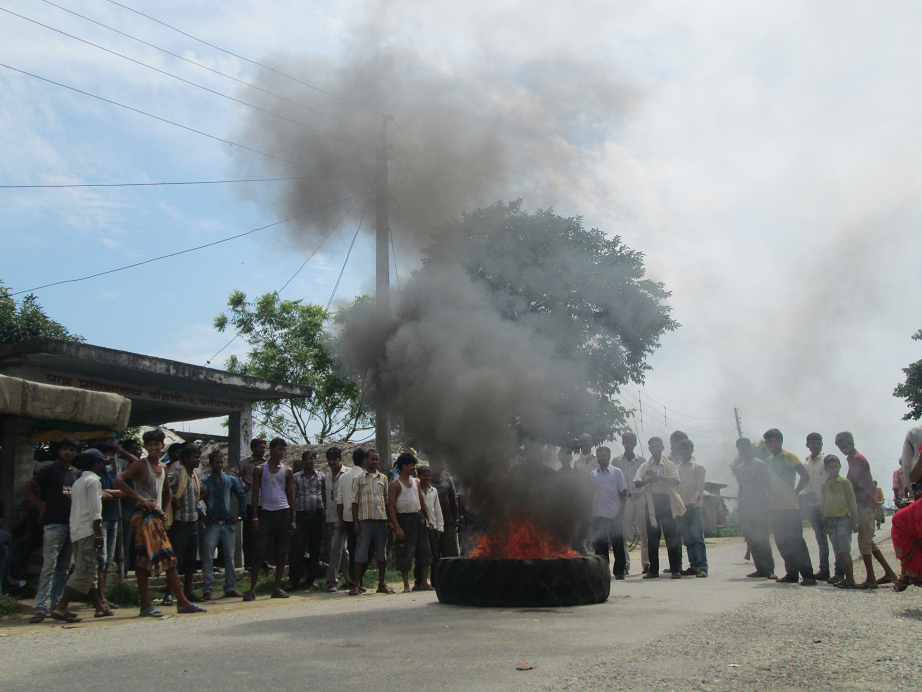 Moreover, the State needs to think about the scale and nature of the escalating protest. The situation is more dangerous than the State thinks. Most of the rural areas of Nawalparasi, Kapilvastu, Rupandehi, Parsa and Bara are extremely tense. Because of the excessive use of force by police, people are angry and more violence can erupt at anytime. So far, 31 people, including 10 police officers, have been killed due to the ongoing protests and resultant violence. And, violence only seems to be increasing in Nepal’s Terai. Click here to find the field reportprepared by the Terai Human Rights Defenders (THRD) Alliance about the reality of violence in Terai in the last 2 weeks.

The way Kalaiya residents have decided that their market will not provide any types of service to police personnel should be a matter of deep concern to the police and the Nepali State. These protests might look like a tussle between the protesters and the State security agencies, but there are signs that it has partially turned into communal violence. Police have been hitting Madhesi and Tharu protesters, and in response, protestors have been selecting, sidelining, and hitting Pahade (hill origin) looking officers, both from the NP and the APF.

Over 20,000 people took part in the funeral procession of the protesters who died in Birgunj on 5 September. But the big three parties and the government ignored this event and went ahead as scheduled. This has further angered people in Madhes. The general perception in the Terai is one of discrimination: ‘the demands of Karnali and Mid-Western region people, particularly the residents of Surkhet, were addressed, but the demands of Madhesis and Tharus have been ignored’; ‘police use water to disperse mass protests in Kathmandu, but fire live bullets in the Terai’. ‘Why this difference in treatment?’ ask the people of the Terai.
If the big three parties continue to ignore the concerns of the Madhesi and Tharu people, it could cause further anger and lead to all out communal clashes in the southern plains.

Thus, the AHRC urges the government of Nepal to create a suitable environment for the aggrieved groups to return to the constitutional process. The three major political parties must bring the agitating Madhesi, Tharu, and Janajati groups to the negotiating table to find a solution to the key issues regarding the constitution, including federal boundaries, citizenship, proportional inclusion, and demarcation of electoral constituencies. The Constituent Assembly should consider allowing requisite time to facilitate solutions to the current standoff.

Most importantly, the Ministry of Home Affairs should reverse the 24-hour curfews and unnecessary prohibitory order put in place at a time when people are expressing their concern on the constitution. It must encourage the security forces to minimize the use of lethal force, as required under both international standards and national law. On the other hand, the protesting parties should also seek a peaceful resolution; ensure no children are made part of the protests; and allow the public to rent rooms and sell daily goods to the security forces.

The National Human Rights Commission (NHRC) should carry out impartial and credible monitoring of protests, in terms of international principles regarding crowd control and excessive use of force by state security forces and possible misuse/inappropriate use of curfews. NHRC should immediately investigate the killings at Tikapur, Bhardah, Parsa, Bara, Rautahat, and Bhairahawa, and recommend prosecution of those responsible for excessive use of force and deliberate or indiscriminate killing of protesters and police officers.

INDIA: Practicing untouchability is a crime, ‘not a social evil’ »