Who will account for the death of three year old Aylan whose dead body was washed up at the Aegean beach in Turkey, the photo of the toddler called upon world’s conscience. The photo that went viral over social media sparked a fresh debate on the Syrian refugees facing civil strife since 2011. As mentioned in an updated MercyCorps article, five years after it began “the full-blown civil war has killed over 220,000 people, half of whom are believed to be civilians.” 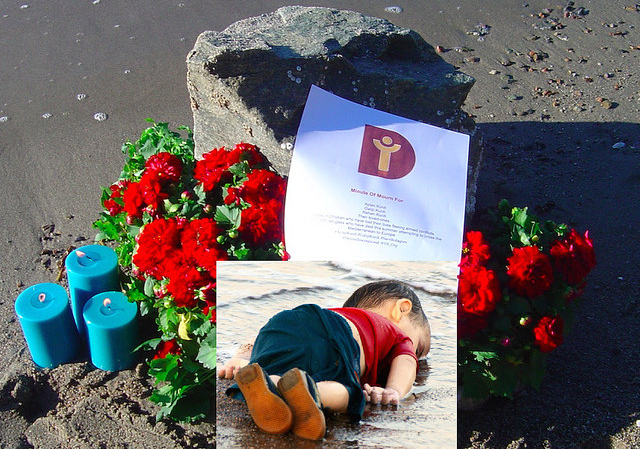 Alan, his five-year-old brother and his parents were among the 1.9 million Syrian refugees trying to flee the war torn region. Aylan’s parents paid smugglers $5,000 to take them and their sons by raft from Turkey to Greece. The boat capsized in the Mediterranean, and Aylan, his brother, and mother drowned. As quoted in an article in the New York Times, the inconsolable father who survived the incident said: “Even if you give me all the countries in the world, I don’t want them. What was precious is gone.”

The Syrian refugee crisis has been described as the worst humanitarian crisis since the Second World War. The UN High Commission for Refugees says there are four million registered Syrian refugees. Many are living under appalling conditions in crammed camps with no running water or electricity. While those fleeing the country find themselves stranded at railway stations, are waiting to board the train to nowhere. The Ottawa Citizen details the funding gap: “The international community has provided only $1.8 billion of the $4.5 billion the UNHCR says it needs to provide basic help to the refugees this year.”

According to the International Organization for Migration, More than 2,600 people have died trying to cross the Mediterranean to Europe this year alone, making the area the most deadly migrant crossing point in the world. The group has warned that the number of deaths is continuously soaring. More than 350,000 people have arrived in Europe so far this year, seeking sanctuary from war or persecution or poverty, or just seeking a better life.

Aylan’s photo surfaced at a time when the international community has not recovered from the shock of discovering 71 dead bodies of migrant refugees, a total of 59 men, 8 women, and 4 children, in the back of the truck in Austria.

Between 2014 and 2015, Europe saw a 40 percent jump in the number of asylum-seekers attempting to reach Europe according to a New York Times report. According to the United Nations, more than 300,000 people have attempted crossing the Mediterranean Sea this year, and 2,500 are proclaimed dead or missing. Europe hasn’t seen a refugee crisis of this magnitude since the end of World War II, when roughly half a million displaced Jews liberated from concentration camps had no place to call home.

“Four million Syrians have registered or are awaiting registration with the United Nations High Commission of Refugees, who is leading the regional emergency response. Every year of the conflict has seen an exponential growth in refugees. In 2012, there were 100,000 refugees. By April 2013, there were 800,000. That doubled to 1.6 million in less than four months. There are now four million Syrians scattered throughout the region, making them the world’s largest refugee population under the United Nations’ mandate. At this rate, the U.N. predicts there could be 4.27 million Syrian refugees by the end of 2015 – the worst exodus since the Rwandan genocide 20 years ago.”

Now lets turn to consider what the International Conventions have to say. Article 14(1) of theUniversal Declaration of Human Rights (UDHR), which was adopted in 1948, guarantees the right to seek and enjoy asylum in other countries. The basic principle of refugee law, non-refoulement, refers to the obligation of States not to refoule, or return, a refugee to “the frontiers of territories where his life or freedom would be threatened on account of his race, religion, nationality, membership of a particular social group or political opinion.”

Under the 1951 Convention relating to the Status of Refugees, Article 33(1), Non-refoulement is universally acknowledged as a human right. The Convention allows refugees the enjoyment of some rights as nationals, such as access to courts, employment, and property rights. Article 16 of the 1951 Convention, states:

1. “A refugee shall have free access to the courts of law on the territory of all Contracting States.

2. “A refugee shall enjoy in the Contracting State in which he has his habitual residence the same treatment as a national in matters pertaining to access to the Courts, including legal assistance and exemption from cautio judicatum solvi.”

While, under Article 17 it is provided that “the Contracting State shall accord to refugees lawfully staying in their territory the most favourable treatment accorded to nationals of a foreign country in the same circumstances, as regards the right to engage in wage earning employment.” And, on the other hand, Article 13 of the same Convention states that the “Contracting States shall accord to a refugee treatment as favourable as possible and, in any event, not less favourable than that accorded to aliens generally in the same circumstances, as regards the acquisition of movable and immovable property and other rights pertaining thereto, and to leases and other contracts relating to movable and immovable property.”

Despite the plethora of international conventions and other international instruments available for the protection of the basic rights of refugees, many European countries see these immigrants as a potential security risk. Caught in the middle are the desperate men and women, many with children in tow, who are fleeing in overcrowded, sometimes deadly voyages by land and by sea. Their governments are unable to protect them and the only option available to them is to flee or languish under dire conditions. The volatile region of Middle East is witnessing civil unrest, coupled with invasion by forces of Islamic state, and this has resulted in a humanitarian crisis not seen since World War 2.

As per Amnesty International , more than 50 million people have been forcibly displaced from their homes in 2015. The refugees often belong to regions torn by war, famine, or persecution. As the world becomes more embroiled in war, with regions such as Syria, Lebanon, and Sudan succumbing to war, the civilians find that there is no place for them to seek refuge.

The Rohingya Muslims in Burma suffer persecution at the hands of the majority abetted by the State, which refuses to grant them citizenship and insist on the proof of residency for at least 60 years to grant the same. In order to qualify for even a second-class citizenship, they must prove family residency for at least 60 years. According to an article in The Atlantic, itself quoting the New York Times, the Rohingyas have “been barred from voting and entering professions like law and medicine. None of the neighboring states, including Bangladesh, want to take the Rohingya in, either.”

The AHRC calls the international community to come forward to help these immigrants; the EU states must provide interim facility to the immigrants fleeing their homes. The states must ensure that all humanitarian assistance is provided to them so that preventable deaths do not occur in the future. Little Aylan’s dead body questions the collective conscious of the world leaders to take action and to play their part in ensuring peaceful resolution to civil war in Syria.

PHILIPPINES: Military assaults and detains civilians and implicates them in false cases in two separate incidents »