WORLD: Government’s failure leads to a pregnant woman being stoned to death

The world is once again shocked by the news of the stoning to death of a 25-year-old pregnant woman, Farzana Parveen Iqbal, in Pakistan. The stoning took place before the Lahore High Court where she had attended due to a summons. The stoning was carried out by 20 members of her own family including her father and two brothers.

The reason for the stoning was that Frazana had married a person of her own choice and she was pregnant with a child from that marriage. Her family did not approve the marriage and was forcing her to marry another person of their choice who happened to be her cousin. The father who was aware of Farzana’s marriage filed a false complaint of abduction against her husband. The police filed charges on the basis of the father’s complaint. It appears that the filing of the complaint was done with the purpose of bringing her out from hiding with the intent to kill her. 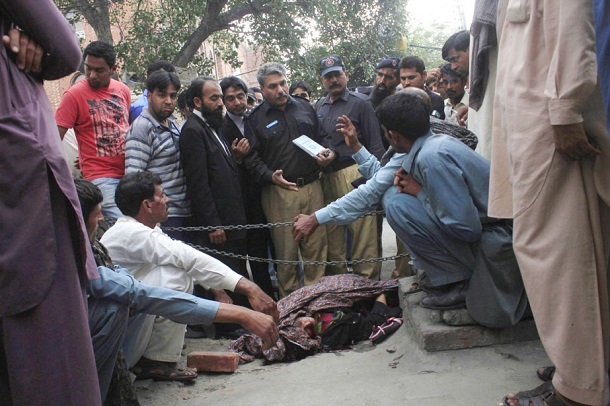 Police collect evidence near the body of Farzana Parveen, who was killed after being set upon by members of her own family outside a court in Lahore, Pakistan. Image courtesy: www.nationalturk.com

It is evident that the police have been a part of this conspiracy as they should have investigated the complaint before filing such a charge. Bringing persons to court with the intent to kill them, particularly in cases relating to honour killings and blasphemy cases is a common practice in Pakistan and the police would have naturally been aware of the situation in this instance. It was when Farzana arrived at the court in order to present her case to the judge that she was already married that the brutal killing took place.

The culprits who took part in the stoning did so in broad daylight and in full view of crowd of people and then manage to escape as there was no attempt to stop or arrest them. As the incident took place before the High Court of Lahore the police would have been present in large numbers at the scene as they are always present when the High Court is in session. In fact, Mr. Iqbal, Farzana’s husband told the BBC that the police stood by and did nothing to prevent the stoning. He stated, “We were shouting for help, nobody listened. One of my relatives took off his clothes to capture the attention of the police but they did not intervene. They watched Farzana being killed and did nothing”.

No attempt whatsoever was made to protect the victim or to obstruct the perpetrators. Farzana’s father later surrendered to the police but as is usual in such instances showed no regret no remorse and admitted openly that he has done this murder.

According to the Human Rights Commission of Pakistan (HRCP), the number of women falling victim to the so-called “honour killings” is enough to dispel all illusions about any interest in saving their lives. In 2013 alone, the HRCP recorded the deaths of nearly 900 women in “honour” crimes from media reports. These women were killed because the state did not confront this feudal practice supported by religious fundamentalism and bigotry.

The Aurat Foundation, a NGO working on the rights of women, states around 1,000 Pakistani women are killed every year by their family members in honour killings. The true figure is probably many times higher since the Aurat Foundation only compiles figures from newspaper reports. The government does not compile national statistics.

In any case, the killing of persons who marry against the consent of the family, which is usually identified by the term ‘honour killings’ is a frequent and a common phenomenon in Pakistan. Furthermore, using a summons of a court as a subterfuge to bring persons out of hiding so that such killings can take place is also a frequent phenomenon. Such situations have arisen both in terms of honour killings and killings relating to allegations of blasphemy.

The most famous incident of protest against this whole manipulation of law in order to kill victims involved Bishop John Josephs, who as a symbolic act of protest shot himself to death.

Thus the government of Pakistan is fully aware of this horror that is being regularly perpetrated but has failed to take any meaningful action in order to bring this practice to an end.

The issue is not about arresting a few persons after the incident. The fundamental issue is the lack of a comprehensive plan on the part of the government of Pakistan to deal with the problem. As long as the government fails to develop a comprehensive plan and implement it, with the cooperation of the law enforcement agencies, honour killings will continue to take place in Pakistan.

The Asian Human Right Commission (AHRC) over a long period of time has consistently drawn the attention of the government of Pakistan about this practice and on every incident of this sort renewed calls to the government to give due consideration to this abominable practice. Similar calls have also been made to the government from the local sources as well as from the international community.

Following the killing of Farzana Parveen Iqbal the UN High Commissioner for Human Rights, Navi Pillay, issued a comprehensive statement in which, among other things, she has stated that the Pakistani government must take urgent measures to put an end to the continuous stream of so called honour killings and other forms of violence against women. They must also make a much greater effort to protect women like Farzana. The fact that she was killed on her way to court, shows a serious failure by the state to provide security for someone who – given how common such killings are in Pakistan – was obviously at risk.

In 2004, former President Pervez Musharaf, defined honour killings as murder, and brought in a law to that effect. However, the eradication of such heinous criminal acts cannot be achieved only by public announcements or through the enactment of laws. Any genuine and effective action lies in the area of the implementation of the law.

It is in this area that the government of Pakistan has proven itself completely ineffective. The system of policing and law enforcement in Pakistan is a law unto itself and even the government is unable to move it even for the purpose of dealing with the worst of the crimes.

The failure of the government to carry out its responsibility lies in its unwillingness and incapacity to exercise control over the policing establishment. If the government proves powerless to move its police to implement the law, and in particular, to deal with the such heinous crimes then no one can feel safe within the territory of Pakistan.

The AHRC also wishes to highlight the need that greater pressure must be brought on the government by the international community to ensure that it takes suitable action to end the police neglect relating to honour killings and all other forms of violence against women. Mere ritual condemnation after honour killings take place is unlikely to bring about any improvement in the situation at present.

The international community including the UN agencies must engage with the government of Pakistan in order to come with an agreement on a practical scheme of action to deal with this situation once and for all. If no such serious attempt is made by the international community it will not convince the persons who are threatened with future attacks of this nature as well as the population of Pakistan which faced with a powerless situation in the face of such horrendous crimes. The failure of the law enforcement agencies to deal with such crimes will only increase the vulnerability of women in the country.

The AHRC calls upon the government of Pakistan not to let Farzana Iqbal’s death be in vain. The people of Pakistan and people of goodwill throughout the world have a right to expect that the government will show its moral indignation and outrage against the horror perpetrated by way of honour killings and other severe violence against women and vulnerable groups.

« NEPAL: Need for amendment of Truth and Reconciliation Law