The Asian Human Rights Commission (AHRC) is concerned about the negligence of the Government of Nepal. The State has shown utter indifference towards Ganga Maya Adhikari, surviving wife of late Nanda Prasad Adhikari and mother to late Krishna Prasad Adhikari. Maoists at Bakulahar Chowk of Ratnanagar, Chitwan allegedly murdered her son, Krishna Prasad, in June 2004, accusing him of being a police spy. 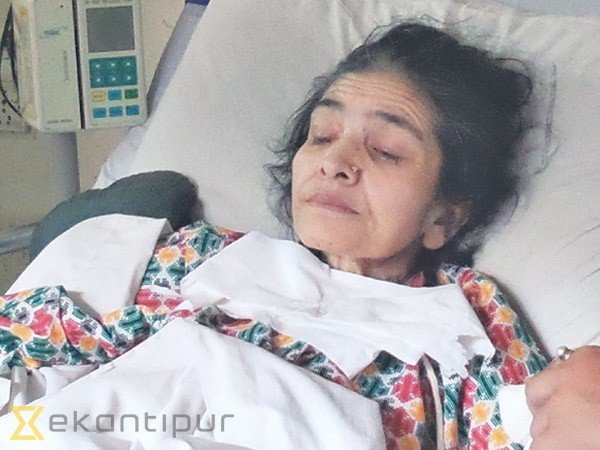 Her husband Nanda Prasad died in a hunger fast, protesting against the injustice of a stalled investigation against their son’s alleged murder. This is the ultimate sacrifice parents can make to seek justice for their murdered son. The government must take this case seriously, or else Ganga Maya may also succumb to the same fate.

Nanda Prasad had registered complaints against three of the accused on 7 June 2004, and Krishna’s brother Noor Prasad had filed another complaint against 11 others. The Adhikari couple had been on fast-unto-death since 23 October 2013.

Ganga Maya is still protesting. Her health is deteriorating, but she is determined to go on until justice is served. Ganga Maya is still seeking justice, from her hospital bed at Bir Hospital, where she has been staging a fast-unto-death protest for the past three years, demanding that her son’s murderers be brought to justice. Her only demand remains punishment for her son’s murderers.

Nanda Prasad died at the Bir Hospital on 22 September 2014 while on hunger strike. Nanda Prasad’s body has been kept at the T.U. Teaching Hospital morgue, as their other son, Nur Prasad, has refused to perform the last rites of his father. Nanda Prasad’s death was the first time in the country that a person died during hunger strike demanding justice.

As Nanda Prasad has yet to be given a funeral, the right of the deceased and his family to final rites, as per family tradition, has been violated. Expressing serious concern over the government’s failure to perform the final rites, the National Human Rights Commission (NHRC) has already urged the government to take action against those responsible for their son’s murder, to provide justice to the Adhikari family, and to honour and implement agreements that have been made.

The Supreme Court ordered the Chitwan District Court to arrest the suspects for investigation in December 2015, responding to the pressure created by the hunger strike of the Adhikari couple and efforts of human rights organizations. However, due to political pressure, the government is still protecting the accused in the case of Krishna Prasad Adhikari’s murder. Moreover, there is no genuine political willpower to bring the perpetrators of crimes against humanity into the ambit of the justice system.

The government of Nepal has made a mockery of the country’s justice system. Chhabilal Paudel, the main suspect in Krishna Prasad’s murder case, is being protected by the C.P.N. Maoist (Centre), which is also a coalition partner in the incumbent government. The Maoists believe that the Truth and Reconciliation Commission (TRC), which was established in February 2015, should investigate conflict-related cases. In the current political context, the TRC is nothing but a tooth that cannot and does not bite; it has been established as a facade. Members of the TRC are political appointees; they are certain to serve the interests of their political masters.

Meanwhile, Ganga Maya continues her hunger strike, and has been taking only liquid foods since the previous government’s assurance that her demands will be met. Ganga Maya has seen eight Prime Ministers come and go in her pursuit of justice, and her husband perished during this course, but justice has not been served yet.

Ganga Maya has been staging the protest and has been seeking justice for a long time, but the State is not willing to address the fundamental problem properly. When citizens die during the course of seeking justice, and more are on deathbeds, sheer negligence of the State showcases a virtual statelessness. Even late Nanda Prasad’s decomposing body is witnessing politicalized injustice and is still awaiting justice.

INDONESIA: Criminal suspect in custody tortured to death after a forced confession »