PAKISTAN: Girls burned alive in country that prides itself on elite nuclear membership

In a country where 52 percent of the population suffers sexual and domestic violence, intolerance and extremist behaviours are only to be expected. Pakistan’s media reports daily abuse against women: burning alive, burying alive, mauled by dogs, honour killings, acid throwing, and physical torture. While proudly claiming its place in a nuclear club among the world’s powerful states, Pakistan remains silent on the growing medieval practices against women and children. 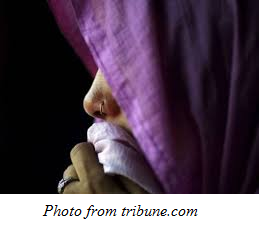 Most recently on 1 June 2016, a 19-year-old girl, Ms. Maria Sadaqat, from Murree hill station, Punjab province, was burned alive for refusing to marry her suitor, the son of a school principal, who had employed her as a teacher. The girl was attacked by the principal and his accomplices when she returned home; the men tortured her before setting her on fire. She sustained 85 percent burns and later succumbed to her wounds at the Pakistan Institute of Medical Science (PIMS), Islamabad. According to the local police, the girl identified two of the five attackers, and the police claim to have arrested two suspects.

This is the second time in just over a month that a Pakistani girl has been murdered over a marriage issue. Earlier, 16-year-old Amber was also set alight on the orders of a jirga. http://www.humanrights.asia/news/ahrc-news/AHRC-STM-068-2016

Although nuclear Pakistan sees thousands of cases of violence against women every year, from rape and acid attacks to sexual assault, kidnappings and so-called honour killings, such violence is never treated as a civil rights or human rights issue. While violence doesn’t have a race, a class, a religion, or a nationality, it does have a gender.

Also leader of the Organisation of Islamic Countries (OIC), Pakistan’s priorities can be judged by its investment in the education and health sectors, compared to its defence expenditure. Around five percent of the total budget is allocated annually to health and education combined, whereas an amount of Rupees 900 billion has been allocated for defence. This lack of priority regarding the development of half of its population explains why 6.2 million girls drop out of school from the 8.1 million girls enrolled at the primary level, leaving only 700,000 girls enrolled at the higher secondary level. Similarly, from the 10 million boys in primary, only 1 million remain in higher secondary (http://www.dawn.com/news/1241630/why-do-so-many-children-drop-out-of-pakistani-schools).

The nuclear Islamic state’s indifference and apathy to violence against women encourages impunity for the perpetrators, helped by the belief that it is a private family matter. Left without any choice or hope for relief, many women prefer suicide than living in a perpetual state of haplessness and misery.

The enactment of a plethora of gender friendly laws has done little to change the patriarchal mindset rampant in the country, and offers little or no reprieve to the victims of gender violence. Without a change in the mindset and effective implementation of the laws and the institutions responsible for implementing them, Pakistan’s women can only suffer in silence.

« INDIA: Jungle-raj in the police and judiciary