PHILIPPINES: Why the country is ranked 3rd dangerous place for journalists, activists

Recently, the Committee to Protect Journalists (CPJ) published its report ranking the country as 3rd “most deadly for journalists,” next to Iraq and Somalia. In another report, the Global Witness ranked the country as the 3rd “most dangerous” for environment and land defenders worldwide, next to Brazil and Honduras, where indigenous people struggle for control of their lands.

The comments and analysis offered by the experts on the report, apart from their ranking of the country, explains that after over ten years of these routine, systematic and widespread attacks on human rights defenders in the country, we have yet to understand the system that allows these killings to happen. 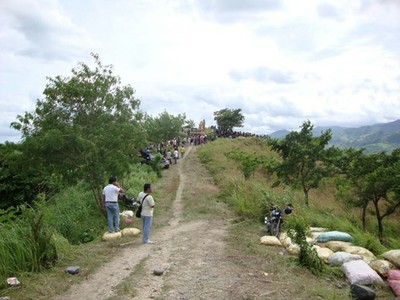 Site of the Maguindanao massacre/Photo by Mark Navales

Take for example, the comment by Rupert Abbott, Amnesty International’s Deputy Asia Pacific Director, that “effective investigations and prosecution for crimes involving human rights violations are rare.” From the AHRC work documenting cases for a decade now, it is not an issue simply of “rarity”, but rather that effective investigation and prosecutions are prevented or obstructed. There is a distinction between rarity and from being obstructed.

While it is partly correct that the problem of unabated extrajudicial killings in the Philippines is a “systemic problem in the country’s criminal justice system”; however, our question is: is the country’s system of justice founded and based on fundamental protection of the right to life? As we have seen, for many years, western countries, notably European countries, have invested so much in improving and developing the country’s criminal justice institutions. The police are given training on effective investigation by foreign experts; so are the public lawyers and prosecutors on prosecuting.

Thus, if we rely on this thesis that the problem is purely “systemic” then it would assume that solutions could be improving the system, like training and building of the capacity for investigation and prosecution. Of course, we are not discounting the importance of training and capacity building; however, has there been any credible assessment that these methods prevented extrajudicial killings; or have they led to the arrest, detention and punishment of the perpetrators? No.

Not even those perpetrators from within the police and the military, the likes of retired military General Jovito Palparan have been arrested. One of the core problems in the Philippines is not the rarity of the effective investigation and prosecution from happening; or, the problem can be address by developing their capacity to investigate alone. The problem is that the security forces involved in extrajudicial killings, enforced disappearance and torture of human rights defenders could not be held to account by the law. They are rewarded, promoted and go unpunished.

So, how can the police and prosecutors carry out an effective investigation and prosecution respectively if the perpetrators are rewarded?

This pattern is not difficult to understand. In fact, within his own backyard, President Benigno Aquino III, in Hacienda Luisita, where seven farmers who were demanding the rightful distribution of their land were killed by the security forces on November 2004. None of those who killed the protestors were punished. In fact, six or seven more activists and the witness to the massacre were subsequently killed.

In the experience of the AHRC, there is a pattern of unequal application of the law in arresting, prosecuting and detaining perpetrators to the murders of journalists and human rights and political activists. Only those persons whom the security forces and the government would consider as ‘not a threat to the internal security and its interest’ are likely to get some form of protection and relief.

For example, protective security was provided to Arthur Sapanghari, a broadcast journalist; and his family, as they were facing threats for reporting corruption, illegal logging and human trafficking in Bukidnon, Mindanao. Obviously, Arthur was provided security because he himself is involved, in the words of the police, “actively participates in the peace and order campaigns in Valencia City.”

But how about those victims and those families who protest against the police? In cases where the policemen are themselves the perpetrators of extrajudicial killings? Do they provide protection to the complainants, witnesses and families? No.

The absence of protection is clearly demonstrated in the case of Myrna Reblando and her family. Myrna, widow of one of the victims of the Maguindanao massacre, has pursued prosecution against the local politicians, the police, soldiers and paramilitary forces responsible. In her case, she had to leave the Philippines because neither the police nor the prosecution could offer her adequate protection.

Her experience is similar to the case of Florence “Dom-an” Macagne, widow of Jose “Pepe”Manegdeg, a social activist who was killed by a soldier in November 2005. Despite her own and her family’s repeated appeals: from the police and prosecution to adequately investigate her husband’s case, and to provide protection to the key witnesses who had identified the soldier as the perpetrator, they did nothing. The court had to dismiss the case because the witnesses withdrew due to insecurity. The victims’ family has to go in hiding due to insecurity.

The problem in the Philippines is deep and one that is yet to be understood both by the victims, their families, and those who could play a role to support them. Without adequately understanding the problems, the rituals of ranking, may help draw attention to them, but could not move and provoke new ideas that could help in resolving the problem.