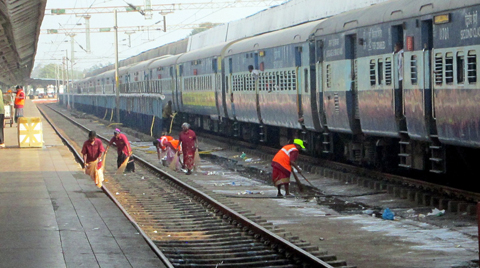 The Supreme Court of India and its subordinate courts have, over the past six decades, issued more than a dozen directives and orders prohibiting the practice of manual scavenging in India. The evil practice, of literally carrying human faeces or cleaning the same from public toilets, is widespread in the country. In most cases the work is carried out or contracted to the lowest caste communities. The most recent related judicial intervention, an order issued yesterday by a division bench of the Maharashtra High Court, directs the state government to end the practice.

The court said: “[h]ow can you justify employing human beings to carryout manual scavenging in this day and age? Asking human beings to clean human waste is a violation of basic fundamental rights. This will shock the conscience of anyone.” The court further directed the government to immediately release Rs. 5 crore so that mobile toilets are made available to the public.

The practice of manual scavenging is India’s national shame. Both the state and private individuals employ manual scavengers. There are a series of legislations that prohibit the practice; none are implemented. The Indian Railways is the single largest employer of manual scavengers. Every railway station in the country has manual scavengers employed and they clean up human faeces from railway tracks in stations with nothing more than a broom and a cane basket. Despite the facts being brought to the attention of the Supreme Court, and the Railways first denying and later admitting their guilt, and the Court directing the Railways to end the practice, the evil continues. Indian Railways still uses pit latrine like closets that discharge human excreta straight on to the tracks. In this sense, each station in the country is also a big public toilet.

India lacks neither the technical knowhow nor the resources needed to reduce human physical labour for the cleaning of public toilets. It is the South Asian mindset that completely disregards human dignity for the poor and the practice of caste that contributes to the upkeep of such practices. Manual scavenging is amongst the worst forms of continuing caste related discrimination and inhumanity.

Social transformation and engineering for the betterment of society is only possible in a country where normative standards of equality before law, human dignity, and justice are held at high levels. In India, such norms do not exist. And, law enforcement agencies are ill-equipped and inept in discharging duties. Therefore, punitive legislations intended to force social reforms have failed.

Considering that it has been over six decades since ‘independence’, the Indian state has displayed dishonesty by continuing to mouth a desire to end manual scavenging.

Given this history, the latest order issued by the High Court is sheer madness; repeatedly doing the same thing and expecting a different result reflects nothing if not institutionalized insanity.

« PHILIPPINES: Why the country is ranked 3rd dangerous place for journalists, activists