Home / News / PAKISTAN: The D.G. Rangers must be prosecuted for the murder of a political activist in his custody

PAKISTAN: The D.G. Rangers must be prosecuted for the murder of a political activist in his custody

A senior political activist, Mr. Aftab Ahmed, working for the fourth biggest parliamentary party, MQM, has been allegedly extrajudicially executed in Rangers’ custody. He ostensibly died due to a heart attack, but his body bears evidence of torture, including burns. 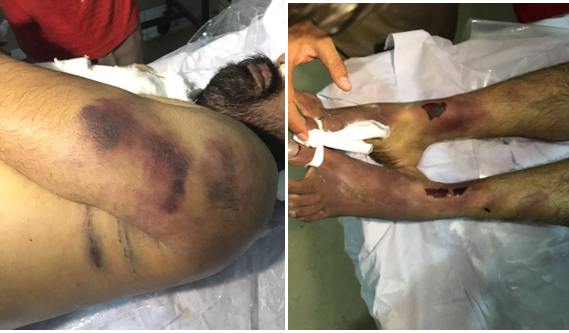 As their first response, the Pakistan Rangers denied Aftab was tortured and claimed he suffered a heart attack in custody and died in hospital. But, later on, when media confirmed severe torture marks on Aftab’s body, the Director General of Rangers in Sindh region, Major General Bilal Akber, confessed that Aftab was tortured, but not severely, and that was not the cause of his death. He said the standard operating procedures were not followed by some Rangers personnel in the case, and vowed to take strict action against those responsible for misconduct.

The Chief of Army Staff (COAS) General Raheel Shareef, finding much criticism from civil society, electronic and print media, and also from political parties, has ordered an inquiry into this killing, and said justice must be seen to be done.

However, no responsible official has yet been arrested or suspended for the extrajudicial killing. The Rangers wish to keep their hands clean. On the other hand, the Military establishment has forced the Sindh government to sanction the stay of Rangers in Sindh Province for a further 77 days, in an effort to provide further impunity to persons in uniform.

Since the Rangers’ operation in Karachi began in September 2013, more than 11 persons have been killed in Ranger’s custody and several activists have gone missing.

Pakistan Rangers officials, Sindh Range, arrested Mr. Aftab Ahmed, 42, Coordinator to the former Federal Minister, Dr. Farooq Sattar. Aftab was arrested from his house on 1 May 2016.He was kept for more than 36 hours in illegal custody of the Rangers and on May 3 his custody for 90 days was granted by the Anti-Terrorist Court. Within 24 hours of the granting of this legal custody, he was dead. He was brought into the hospital at 7:55 a.m. and he was declared dead at 8:20 a.m. The doctors claim he was already dead and he had no pulse whereas Rangers claim that he suffered a heart attack and was immediately taken to hospital.

The post-mortem was conducted in the tight security of Rangers and doctors were forced to make report according to the version of Rangers that the victim was brought in hospital and doctors tried to save his life from heart attack but he could not. But the spokesperson of the Jinnah hospital Karachi declared that he was died before reaching the hospital.

His dead body was found having several torture marks. After receiving the body, Aftab’s friends and family members recorded the state of the body, and circulated the pictures and videos on social media, which were, in turn, picked up by electronic media houses. The Rangers were forced to come out with a clarification. The Director General of Sindh Rangers assured that strict action would be taken against those responsible for this misconduct but maintained that Aftab’s death had occurred due to a heart attack.

This case is an example of the total failure or non-existence of a criminal justice system, where torture has been made into the sole viable method for investigation. Men in uniform, having powers to conduct brutal acts with impunity, can manipulate the justice system and get impunity.

This case also shows the necessity of a law against torture and ill-treatment. Due to its absence from the Penal Code, persons from law enforcement agencies have never been tried for alleged acts of torture. So, no inquiry has ever been initiated on the charge of conducting torture and no official accused of torture has been punished.

The Asian Human Rights Commission (AHRC) urges the provincial government of Sindh to stop torture in custody and immediately close down the torture centres of Rangers and also the private torture cells run by police. The government must also create inspection teams that can monitor the detention centres and provide all basic facilities for detainees.

The Military, for its part, must immediately provide compensation to the bereaved families; and assist in ensuring the responsible officers are prosecuted on charges of murder.

The AHRC also urges the Chief of Army Staff, when he ordered for fair inquiry, therefore it is requirement of the fair inquiry that the director general of Pakistan Rangers, Sindh region, Major General Bilal Akber must be relieved of his present duties otherwise it is impossible to have a fair inquiry in his presence.

« PAKISTAN: Call to abolish Ghag, a tribal custom, that had ruined lives of many girls