Home / News / PAKISTAN: The AHRC thanks the Prime Minister of Belgium for saving the life Sajid Hussain

PAKISTAN: The AHRC thanks the Prime Minister of Belgium for saving the life Sajid Hussain

The Asian Human Rights Commission (AHRC) wishes to sincerely thank the Prime Minister of Belgium M Charles Yves Jean Ghislaine Michel and his administration for taking serious note of the Urgent Appeal issued by the Asian Human Rights Commission AHRC- UAC-033-2017 and taking prompt action with regard to the immediate suspension of the deportation process of Kashmiri political activist Mr. Sajid Hussain – and granting him asylum for which he struggled for many years.

We laud and commend the swift action of the Government of Belgium and for taking into considering the case of Mr. Hussain, which demonstrates Belgium commitment in protecting human rights and rule of law. 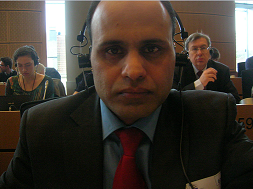 We reiterate to the Government Belgium that the human rights situation in Pakistan are in a dismal state, the rising incidents of torture, extra judicial killings and disappearances all indicate a near total collapse of the criminal justice system. Human rights are outright denied to every citizen who dares to disagree with the state’s agenda. Political dissent is especially dealt, with an iron fist, met with state force, and many political activists like Mr. Hussain are forced to go into hiding or flee the country in fear of their lives.

Belgium being a member of the European Union, that stand steadfast in protecting civil liberties and democratic freedoms of their citizens , the EU member countries have become a natural choice of asylum seekers and all who value freedom.

We take this opportunity to request the Mr. Prime Minister of Belgium to consider the application of all activists whose lives are in constantly in imminent danger in their countries of origin. Their refoulment without a due hearing and deportation may result in their disappearance or death in custody – as has become the norm in most these countries, and especially so in Pakistan.

Incidentally, custodial torture and enforced disappearances are used as a tactic to inculcate fear in the hearts and minds of dissenters and political opponents. The state has established a layered and organised system of impunity allowing the law enforcement agencies unbridled power to deal with any individual at their whims and fancy. The impunity, law enforcement agencies exercise, is deeply entrenched in the entire system of governance and there is a general atmosphere of fear in the country where a common citizen no longer feels safe, even in her/his own home.

The radicalisation and Talibanization has further eroded the fabric of the society marred by corruption and incompetence the government machinery has become callous and dysfunctional at protecting the civil rights of the citizen who are left to fend for themselves.

Enforced disappearances are also major impediment in the path of the work of these activists and are exercised with complete impunity. The practice of enforced disappearances was in the early days, limited to Balochistan province. However, that no longer is the case. The urban centres and metropolis of the country are now also being engulfed in the fire. No one is safe. In fact this state brutality has now extended its tentacles into social media and online activities of the activists and left wing liberals.

The government of Belgium, inter alia leveraging means such as the GSP plus status must ensure implementation of the rights of the vulnerable groups and must urge the government of Pakistan to legislate against the practise of enforced disappearances and custodial torture.

Mr Prime Minister, though the members of civil society are resolute and unwavering in their resolve to eradicate the menace their influence and clout islimited. Despite their utmost efforts at raising awareness and protest against the disappearances, torture and extra judicial killings continue and instead are on the increase.

Dear sir there is much that the civil society can achieve under the aegis of international interventions by states that are champions of democracy and human rights in the world. We urge you to support this cause and help the activists in achieving their goal of torture free Pakistan.

« INDIA: A country where torture is the norm

BANGLADESH: Institutionalization of torture within law enforcement defeats the purpose of criminalization »