BANGLADESH: Institutionalization of torture within law enforcement defeats the purpose of criminalization

Bangladesh’s law enforcement agencies have institutionalized torture within their day-to-day operations. Policing, maintaining law and order, and conducting crimeinvestigations, all incorporate torture as an integral part. At the same time, the widespread use of torture goes underreported in the media, and is collectively covered up by the judicial and administrative authorities to benefit the rulers of the day. 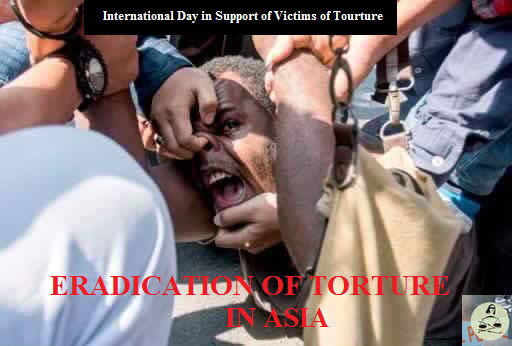 Victims of torture hardly get access to a complaint mechanism, while the police refuse to register complaints against its own personnel for committing such heinous crimes. The few victims who seek legal redress by approaching the Courts, lose hope as they experience a justice system alienated from the rule of law and the principles of fair trial.

The experiences of Mrs. Jibon Ara, an awarded woman entrepreneur of Cox’s Bazar district town, is similar to that of many torture victims, exposing the core of Bangladesh’s policing and justice systems. Officers of Cox’s Bazar Sadar Police Station raided her family’s house in the early hours on 2 March 2017 without any valid warrant. All the family members were blindfolded and confined in a room. One officer made an unverified claim that he had found 6000 pieces of Yaba tablets -a drug smuggled from Burma to Bangladesh- from Jibon Ara’s house. The police detained Jibon Ara and her husband Mr. Ali Ahammad. Police Sub Inspector Manosh Barua brought them in police remand on permission of the Magistrate Court, and allegedly tortured her in custody for bribes of BDT 3 millions. For refusing to pay the bribes the police officer allegedly gave electric shock to Jibon Ara’s genitalia and chest. She had to languish in prison until the Sessions Judge granted her bail on March 23, when the Court verified Jibon Ara’s alleged injuries that started rotting in prison without any treatment. She had primarily refused treatment at the Cox’s Bazar until the District Council Chairman intervened, and was referred to the Chittagong Medical College Hospital to receive further treatment at the One Stop Crisis Centre (OCC). The OCC found that Jibon Ara had injuries in her private parts, as she shared in a press conference on April 18 at Cox’s Bazar Press Club. On April 19, she filed two cases against the police with the Sessions Court – one for torturing her and the other for ransacking her house and insisting her to pay bribes. Five police officers including the Officer-in-Charge (OC) have been made accused in her complaints. She also submitted petitions to the Police Headquarters and to the Office of the Superintendent of Police of Cox’s Bazar district, with the help of local rights activists. SI Manosh Barua allegedly tortured Jibon Ara’s brother-in-law Jahangir when he accompanied Jibon Ara to seek assistance from the activists. One of Jahangir’s legs was fractured. The district police office had assigned the Additional Superintendent of Police to inquire into Jibon Ara’s allegations. In reaction, SI Manosh Barua reportedly told the media that “Jibon Ara is an accused in a regular case. She may bring allegations against me. However, nothing will happen to me for this”.

This one story is enough to understand the endemic nature of torture in Bangladesh’s law-enforcement system. It also indicates the difficulties the victims of torture and their families face when they attempt to seek redress. While the perpetrators can publicly boast that ‘nothing will happen’ to them, victims like Jibon Ara and her family have no guarantee that they will see justice at the end. Human rights defenders also often face reprisals for helping victims of torture. Most victims thus keep silent and do not register complaints against law enforcement officials.

Torture is constitutionally prohibited since the inception of the country and criminalized in a special law, Act No. 50 of 2013. Neither the constitutional ban nor the criminalization matters as far as the endemic practice of torture is concerned. Bangladesh’s international obligations under the International Covenant of Civil and Political Rights (ICCPR) and the Convention Against Torture, or Other Cruel, Inhuman and Degrading Treatment or Punishment, also has no value in protecting citizens from torture. Likewise, the many voluntary pledges made by the government in various international platforms to adhere to the essence of universal norms of human rights also have little practical value. Successive governments and the law enforcement agencies keep using torture against citizens for their undeserving political and financial benefits. Both the ruling party and the law enforcement agencies want to use torture and both protect each other while there is no system of checks and balances in place.

Ratification of the United Nations Covenants and Conventions are only to build an ‘international image’ of the government. No practical actions are taken to abolish the torturous policing system or establish an effective justice mechanism to hold the perpetrators accountable. Torture is institutionalized within Bangladesh’s law enforcement system to maintain the status quo of the power structures and the chain of corruption by the political, financial, and bureaucratic elites.

Any sincere intention to establish a torture free Bangladesh requires deepunderstanding of the policing system and the capabilities of the justice mechanism as well as their direct and indirect relationship with the political culture of the country. Human rights activism in Bangladesh also needs a change in its approach. Observing international days like the United Nations International Day in Support of Victims of Torture, on June 26, by hosting seminars, rallies, human chains, protests may only be useful once the discourse contains in depth knowledge about the institutional problems, particularly the policing, crime investigation, forensic examination, prosecution, adjudication systems of the country. There should be sufficient knowledge on the inter-institutional relations in orchestrating human rights violations through an entrenched culture of impunity and involvement of the political masters of different hierarchies. The society needs to be prepared for replacing the torturous system by a just system that guarantees equality before the law.

Torture victims, human rights defenders, media professionals, civil society groups, political activists, and the international community need to be honest in removing the torturous system. Partisan fascination for narrow individual or sectarian interests will only deepen the problems faced by the 160 million people of Bangladesh. Bangladeshis deserve sincere initiatives to abolish torture, to allow for their active participation in establishing a functional democratic process, to remove inequality and to live with peace and dignity.

« PAKISTAN: The AHRC thanks the Prime Minister of Belgium for saving the life Sajid Hussain

NEPAL: Police continue using torture as the only resort in the year 2017 »