Home / News / SRI LANKA: The beheading of Rizana Nafeek is symbolic of the powerless citizenry – all Sri Lankans are in chains

SRI LANKA: The beheading of Rizana Nafeek is symbolic of the powerless citizenry – all Sri Lankans are in chains 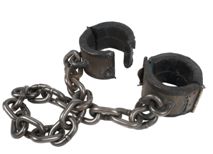 The 65th Anniversary of the independence of Sri Lanka occurs today and all that we are reminded of is the loss of the liberties of the people of the country. Perhaps the heroine to be remembered at this time is Rizana Nafeek who was 17-years-old when she left Sri Lanka to find employment in Saudi in order to support her poor family. Within days she was charged with a murder where no murder had, in fact, taken place. Seven years later she was beheaded for a crime which had not happened. Her government made little if no effort to save her life. The plight of most of the citizens of Sri Lanka is very similar.

On the economic front the people are struggling to do the impossible, like Rizana, to keep their families alive. On the political front the people are victims of a system in which they are powerless to influence. On the legal front they are without any protection of the law. Like the beheading of Rizana under the authority of the Saudis, the beheading of the Chief Justice of Sri Lanka at the hands of the president bespeaks of a time where reason has hardly any place and justice has become a word that people cannot associate with any positive meaning.

The freedom of speech is what sustains an independent nation. Today, the freedom of speech is considered to be the privilege of traitors. Everyone who has tried to exercise their right to the freedom of speech has paid a heavy price for it, some with their lives and others by having to go into voluntary exile. Meanwhile the rhetoric of the ‘motherland’ and the virtue of patriotism are lauded by those who rule. But what this means is that there must be a voluntary silencing of oneself about whatever evil one sees happening around the country. Those who dare to inquire into the corruption that is taking place are entering a path where they can expect no chance of protection.

Even under colonial times the citizens enjoyed the right to a legal remedy against wrongs. Those who suffered wrongs relating to their person had the benefit of investigations by criminal justice authorities and had the right to expect that the culprits would be brought to justice. This was also the case in relation to attacks on property. Today, no one can reasonably expect that there will be redress for the wrongs he or she suffers. The wrong may be rape or murder and the list of victims who have not found legal redress for such wrongs is a lengthy one and grows daily.

What are worse are attacks on property which may happen by way of land grabbing or many forms of fraud and for which there is no redress either. Some who have sought redress have become victims of enforced disappearances or worse. Others have had to take extraordinary measures to ensure their own security. Even approaching the courts with the assurance that political or other influences will not be extended into their affairs is a belief that hardly exists anymore. The general expectation is that there will be massive biased influence and those who want to get even must find a way in which to get political patronage. Even if by some chance a citizen is able to get an award from the courts in his or her favour there is no guarantee that the court order will be implemented. The recent interpretation of the law by the Supreme Court relating to the impeachment and the writ of certiorari issued by the Court of Appeal will remain as a reminder of changed times where the authority of the courts cannot be assumed.

All this comes as no surprise when the people live under a political system which they have all agreed is not suited to their country. That the executive presidential system brought about by the 1978 Constitution has caused havoc to the country is not a matter of any dispute. The incumbent president, Mahinda Rajapaksa and the former president Chandrika Kumaratunga both pledged to abolish this evil system and almost every politician and prominent citizen has echoed the same view. Indeed, there is no one that morally defends the executive presidential system. But despite of the absence of political or moral justification the system has increased its influence and remained more entrenched than ever. If there was a total contradiction between the general will that Jean Jacques Roseau spoke about and the actual government in power, Sri Lanka is a classic example of such absolute dichotomy.

A political system that exists against the general wish of the population must necessarily rely on the security apparatus for its survival. In Sri Lankan the system depends entirely on the security apparatus maintained by the Ministry of Defense which is the real source of power and which, in turn, uses the paramilitary forces and the intelligence services to maintain control. That apparatus is outside the control of the law and the judicial institutions. Once, a former junior minister of defense, Ranjan Vijerathna, told parliament, “These things cannot be done according to law”. This was a reference to dealing with counter insurgency. Today’s political ideology is such that nothing practical can be done according to the law. Acting against the law is no longer an offense or a violation but the expected course of action allowed for achieving practical ends. That the ‘end justifies the means’ has perhaps never been used to so effectively to justify the flouting of the law as is now the usual practice in Sri Lanka.

Besides the security apparatus there is the propaganda apparatus (the state media). It too is allowed to operate outside the law, morality or any kind of ethical behaviour. Character assassinations of perceived opponents of the government resorting to any kind of violations of rules of publication, the uttering of any kind of falsehood, acting in contempt of court are all permitted to the state media. It is a ‘no holds barred’ operation. Again the law and the courts can do nothing to regulate or to control the operation of this machinery.

Under these circumstances it is quite appropriate that a bishop of the Anglican Church has called upon his church to celebrate Independence Day as one of lamentation. It is a day that the citizens have to tell themselves, “Mea Culpa, Mea Culpa Mea Maxima Culpa”. Indeed, the future of Sri Lanka lies in the ability of the citizens to blame themselves for what has become of the country and themselves. It is only through a process of repentance and self examination that the citizens can develop their own internal capacity to resist the evil that prevails over them. Having to accept the blame for the loss of the lives of hundreds of thousands of people from all parts of the country, having contributed to the agonies of their families, to be responsible for allowing illegal arrest, detention, torture and ill-treatment, the denial of fair trial, the denial of freedom of association and expression and the denial of the right to elect the government of one’s choice are all things to which the citizens have contributed is no easy task. As such violence takes place there has been the plunder of national resources, the spread of illegal businesses such as the peddling of drugs causing havoc, mostly on the young, financial offenses disrupting the very social organisation itself are all things that have happened with the connivance of the people themselves.

Repentance is the only way to recover the critical spirit which, in turn, is the only way by which the minds of the people will be opened to see the truth as it is. It is only in this way that the falsehood and the misappropriation of power can be resisted.

This is not an easy task. Fake repentance and pseudo resistance only means self deception. What is required is a firm will to demand the kind of political system that matches the aspirations of the people as a whole and the rejection of a system that exists only for the benefit of a handful of people.

PAKISTAN: A police officer killed one young man, shot and injured his brother and attacked their father with the intention to kill for not paying the extortion money »