The Asian Human Rights Commission (AHRC) is pleased to share that the Kavrepalanchowk District Court has finally sentenced three army officers to 20 years’ imprisonment for the murder of 15-year-old Maina Sunuwar at the height of the Maoist insurgency in February 2004.

On April 17, a single bench of Judge Medini Prasad Paudyal convicted the former army officers Colonel Bobby Khatri, Captain Amit Pun and Sunil Adhikari, of killing Maina Sunuwar in accordance with Section 13.3 of the Homicide Chapter of the Civil Code (Muluki Ain). The court acquitted Major Niranjan Basnet, stating that the evidence against him was insufficient. Khatri, Pun and Adhikari resigned from the army in 2005.

This is a symbolic verdict, being the first time Nepal Army officials have been convicted of a crime during the decade-long armed conflict (1996-2006). Maina, a school girl in Kharelthok VDC-6 of Kavrepalanchowk district, was arrested by army personnel on 17 February 2004. After her family and human rights advocates pressured the government regarding her whereabouts, it emerged that she was tortured to death in army custody. 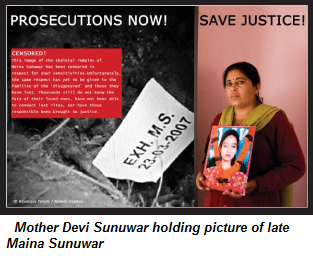 Maina’s mother, Devi Sunuwar, had filed a writ petition at the Supreme Court in 2007, demanding an order to District Police Office, Kavre, to complete the investigation. Due to immense pressure created by national and international human rights organizations, the District Police Office exhumed Maina’s remains on 23 March 2007. Only after the Supreme Court ordered the police to complete its investigations and file a case at the district court on 18 September 2007, did the police file a case.

The government attorney filed a murder case on 31 January 2008, at Kavrepalanchowk District Court, on the basis of a written complaint lodged by Maina’s mother on 13 November 2005 against the four army officials. From 2008 to 2013, the trial was ongoing, and in 2013, the case was postponed for two years. Finally in January 2016, Judge Awani Mainali Bhattarai ordered the case to be reopened.

Since none of the defendants appeared in court during the trial, they will not have any right to appeal against the verdict. However, Maina’s family can still appeal against the District Court’s verdict, which will be given in full within a few days.

It is now important that the police successfully arrest the ex-army officials and ensure they serve their sentence. Maina’s family members, as well as national and international human rights organizations are alarmed as authorities have failed to arrest Maoist leader Bal Krishna Dhungel so far, despite the Supreme Court convicting Dhungel of the murder of Ujjan Kumar Shrestha in 2010. The Kavre court’s verdict follows a Supreme Court order of April 13 to the Chief of Nepal Police “to arrest Bal Krishna Dhungel within seven days”. Dhungel reportedly fled to India using his party connections.

With this verdict, a mother’s relentless crusade for justice has been achieved. This groundbreaking verdict has given hope to victims and families of war eracases. However, the fight is only half over, as there is uncertainty in effectiveimplementation of the court’s verdict. There must be continued efforts by national and international civil society and human rights organizations to pressure the government of Nepal to enforce this landmark verdict. Otherwise, 13 years of ordeal and effort to get justice by Maina’s family will go in vain.

« PAKISTAN: The AHRC condemns the lynching of a university student on accusation of Blasphemy