Home / News / PAKISTAN: The AHRC condemns the lynching of a university student on accusation of Blasphemy

PAKISTAN: The AHRC condemns the lynching of a university student on accusation of Blasphemy

The Asian Human Rights Commission (AHRC) strongly condemns the brutal murder of a 23-year old student by lynching on the accusation of Blasphemy by a mob at Abdul Wali Khan University, Mardan, KPK province.

The AHRC also condemns the violence in the name of blasphemy as it is deeply disturbing and sets an extremely dangerous precedent-justifies the killing of anyone – Muslim or non-Muslim whom an extremist considers to have shown disrespect to Islam. The AHRC believes in the equal right of all individuals’ right to be able to peacefully practice their faith without fear of persecution or violence 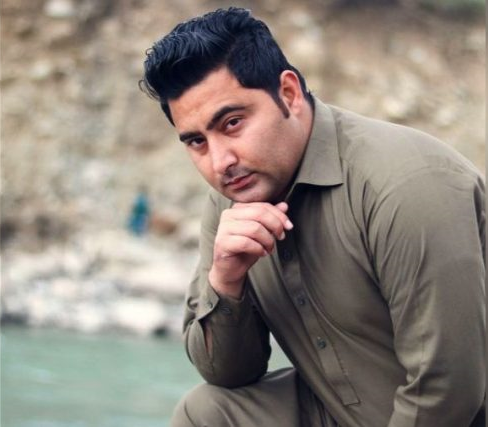 Mashal Khan, a 23-year-old journalism student at the Abdul Wali Khan University in Mardan, is yet another example of how brutalised Pakistani society has become. Mashal and another student Abdullah were attacked on campus by a vigilante mob who accused them of blasphemy. Abdullah was able to escape – and is said to be in a critical condition – but Mashal was killed after being first thrown from the second floor, then brutally beaten and then shot by the mob.

Student groups of religious parties accused him as blasphemer but the chief minister of KPK province rejected the accusation and said according to his investigation nothing blasphemous material has been found from his cell phone record and his hostel room. Some employees of the university, from different Islamic groups have also lamented him as Ahmadi, however, the local authorities deny that his family belongs to Ahmadiyya community.

As per the eyewitnesses, the dead body was desecrated for several hours before the police arrived to control the violence. Reportedly the a 1000 men strong mob having several leaders of the student wings of the Islamic parties broke open the gate of the hostel and dragged Mashaal out of his room before killing him despite the presence of the police and University administration. The disturbing video of the violence that ensued can be viewed here

The violence seems to have escalated since a judge of the Islamabad high court took a position on religious matters of individuals, particularly about free discussions on social media. Before becoming judge of the high court he was running a movement for the release of constable Mumtaz Qadri, the assassin of former governor of Punjab on the charges of Blasphemy, and later on the Supreme Judicial Council in an award to his services for Islam, has appointed Mr. Shaukat Siddiqi, as the judge of Islamabad High Court.

The officers from highest echelons of the state from the Prime minister to the interior minister have jumped on the blasphemy bandwagon and have vowed vengeance on anything blasphemous without elaborating on the outer fringes of the term thus allowing an official impunity to all and sundry to interpret any utterance or word as blasphemous. These free for all invite has escalated the downward spiral of violence and mob vigilance that has engulfed the state of Pakistan. Even places of higher learning such as a university are no longer safe heaven for freedom of religious thought or expression.

The judiciary itself is a partner in crime and hands out sentences on regular basis. For instance On January 2, 2016 an Ahmadi Abul Shakoor was sentenced to five years in prison on blasphemy charges and three years on terrorism charges for propagating the Ahmadia faith 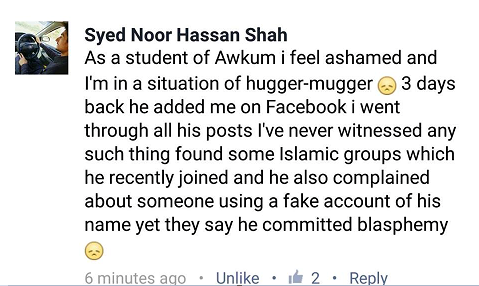 The non-state actors also play their part without fear of any repercussion by doling out mob justice on the pretext of allegation alone. The severity of the mob vigilance can be gauged from the fact that At least 65 people have been murdered in Pakistan after being accused of blasphemy since 1990.

The deceased student was alleged to have committed blasphemy. As per a tweet of a colleague of Mashaal “ I went through all his post I’ve never witnessed any such thing found some Islamic group which he recently joined and he also complained about someone using a fake account of his name yet they say he committed blasphemy”

According to media, report the injured student Abduallah was forced to clarify his faith in Islam by reciting verses from the Holy Quran repeatedly. During this time, he was brutally beaten away by other students.

Blasphemy has emerged as a result of extremist form of religious beliefs and threatens the minority groups right to freedom of religious belief causing persecution in its worst form. With more than 40 people on death row or serving life sentence for blasphemy Pakistan has the highest number people on death row or serving life sentences for blasphemy than in any other country in the world.

The US Commission on the International Religious Freedom in its report for the year 2016 has Placed Pakistan in the list of 11 countries shown to have worsening religious persecution. The commission’s director of policy and research has said that the situation in Pakistan is “reaching crisis proportions.”

The report further states that the Pakistani government continues to perpetrate and tolerate systematic, ongoing, and egregious religious freedom violations. Religiously-discriminatory constitutional provisions and legislation, such as the country’s blasphemy law and anti-Ahmadia laws, intrinsically violate international standards of freedom of religion or belief and result in prosecutions and imprisonments.”

The AHRC urges a strict disciplinary action against those involved in the barbarous murder of Mashaal and demands that the state brings the perpetrator to book.

The Supreme Court of Pakistan must initiate an independent judicial enquiry must immediately into the incident and the officers of the university’s administration found negligent in their duty to protect the student should be charged for manslaughter.

« INDONESIA: Accused thief detained and tortured to death by the Kendari Police