Hazaras draw their racial lineage from Turks and Mughals and are mostly followers of the Shia sect of Islam. Their ancestral land is situated in central Afghanistan named as ‘Hazarajat’. Hazaras living in Pakistan also come from the same race and territory. They migrated to then British India to avoid persecution. They had been subjected to one of the world’s most infamous genocides committed by Afghan king Abdur Rehman in the late 19th century- 1880 to 1893. 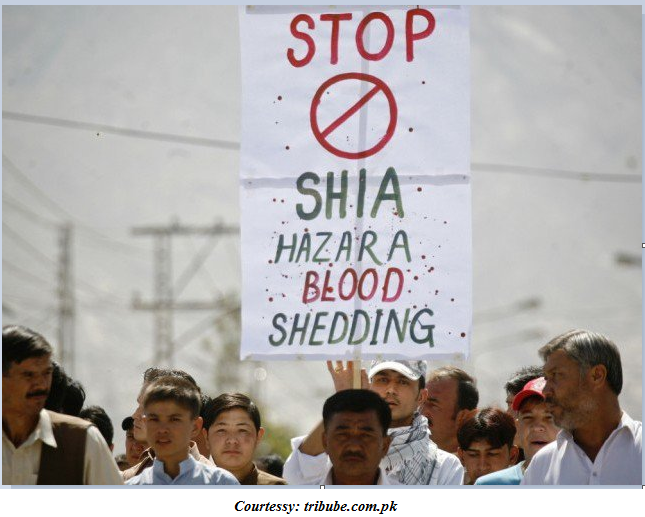 Hazaras lived a peaceful life in British India and later on in Pakistan until the 1980’s. But the situation started to deteriorate under the ex-Pakistani president and the military dictator General Zia-ul-Haq. They set up a policy of Islamization of the country and took steps to promote the Wahabi school of thought under the influence of Saudi Arabia and other Gulf states. Tremendous funding by these Arab states led to the opening of thousands of madrasa’s (religious seminaries) in various parts of Pakistan. They were in Balochistan and Khyber Pakhtunkhwa which share borders with Afghanistan. The intolerant and pro-Wahabi preaching at these madrasa’s soon transformed the peaceful life of minorities like Shias, Zakaris, Ahmadis, Christians, Sikhs, Hindus and Hazaras into a nightmare. It finally culminated into two things: the creation of the Taliban in Afghanistan and the carrying out of terrorist attacks on minorities in Pakistan by religious fanatics turned out by these Saudi-funded schools.

The Taliban ruled Afghanistan from 1994 to 2001 during which they established a new record of brutality and persecution. They killed thousands of people especially the Hazaras. The Northern Alliance with Hazaras played a vital role in ousting theTaliban from power in Afghanistan after the US attack in October 2001. Taliban militants later fled to Pakistan and with the support of government officials started targeting minorities across the country. The ethnic Hazaras in Quetta, capital of Balochistan province, had to bear the brunt of these attacks due to their racial links and religious beliefs with Afghani Hazaras . A total of 190+ terrorist assaults, including eleven suicide attacks, have been carried out on Hazaras. Over 1400 people have been killed and more than 3500 injured (1).

According to the Human Rights Commission of Pakistan these terrorist attacks forced some 200,000 Hazaras to migrate abroad (2). It is worth mentioning here that more than 300 Hazaras have lost their lives in the sea while travelling to Australia by boat to seek asylum.

The terrorist attacks carried out on Hazaras in Balochistan are mostly claimed by the group, Lashkar-i-Jhangvi. But amazingly, the Pakistani government, its judiciary and law enforcement agencies have completely failed to bring any member of this group to dock. Even Balochistan’s then-chief minister, Aslam Raisani, told the media, “Of the millions who live in Balochistan, 40 dead (Hazara) in Mastung is not a big deal. I will send a truckload of tissue paper to the bereaved families” (3). It has thereby created grave concerns among the victim community regarding Pakistan’a intention to capture the terrorists involved in their killings. The following facts imply that the Pakistani government has been an abettor to the Hazaras’ genocide instead of a preventer:

1: Quetta, according to Pakistani premier Nawaz Sharif, is a small city of 20 streets (4). It is unbelievable, that a government which claims to have one of the best intelligence agencies in the world and thousands of trained law enforcement personnel have failed to trace the terrorists in this small city of twenty streets.

2: According to Pakistani interior minister Chaudary Nisar Ali Khan, Quetta is the city which has the largest number of security personnel. Every 100 meters there is a checkpoint of some law enforcement agency. (5). Despite such heavy security, the terrorists targeting Hazaras, still managed to flee after every attack. This casts doubt on the government’s intention to apprehend the killers.

3: An Asian Human Rights report says that most of the Hazaras were attacked and killed at places in Quetta which are only 300 to 500 meters away from paramilitary force (Frontier Corps) checkpoints (6). One wonders what the personnel of this force are doing when Hazaras are being targeted killed under their very noses.

4: After the deadly attack on Hazaras on January 10, 2013, the government confined the movement of the Quetta community with a 0.5 million population. They established a security shield around the area. Cracking down and arresting a handful of terrorists roaming freely in the city and its surrounding environs was neglected (7).

5: By making a ghetto of the Hazara community, the Pakistani government has not done any good for the terrorist-hit community. According to the Director of Human Rights Watch for Asia, it has deprived them of their basic rights of:

A: Getting an education by going to educational institutions in other parts of the city
B: Conducting an even business ambience, as community traders are forced to shut down their businesses because they are unable to move out of these ghettoes
C: Mingling and interacting with other communities in the city
D: Working in their offices and other livelihood means to earn money to feed their families (8).

6: The attacks carried out by the sectarian terrorists during 2015 were mainly aimed at Hazara businessmen in the central part of the city. It is swamped with law enforcement agencies yet none of the perpetrators were arrested. During the current year, Hazara causalities number 22 (9).
7: After a short break, the terrorists resumed their hunting down of Hazaras. On 1 August 2016, two Hazaras were killed in broad daylight on the Sar-e-ab road. Now they have threatened more massive attacks (10), which will only result in more casualties and more restrictions of their movements.

It is worth considering here that the Hazara nation has always raised its voice in every available forum against their brutal massacre and economic, educational and social blockade in Pakistan. They have also organized demonstrations in more than 20 countries of the world to record their protest against the persecution of their community members in Pakistan. It is ironic that, the Pakistani government despite making several commitments and implementing a “National Action Plan” to eliminate terrorists, is still unable to ensure security for the Hazaras. The Hazara people attribute this failure to the Pakistan Army’s policy of strategic depth in Afghanistan. Religious fanatics are considered to be a valuable asset for Pakistan to hold sway in neighboring countries. In this connection, the Human Rights Watch writes “The LeJ long enjoyed a close relationship with Pakistan’s military and intelligence agencies, which encouraged it in the 1990s to forge strong links with armed Islamist groups fighting in Kashmir and Afghanistan. Almost the entire leadership of the LeJ fought alongside the Taliban in Afghanistan. In 1998 it aided the Taliban in the massacre of thousands of Hazaras living in Mazar-e-Sharif.”. (11)

Using all available means and having left with no other options, the Hazara Diasporas have now decided to knock at the doors of international communities, the United Nations and human rights organizations to request them to use their influence on the Pakistani government:
a. To stop the genocide and end the economic and social blockade of the community
b. To establish an independent inquiry committee to identify who are behind this genocide
c. To ensure that they are brought to justice

About the Writer: The writer is the press Secretary, Hazara Organization for Peace and Equqlity, New York and can be reached at; ishaqmohdi@yahoo.co.uk