“A mob is the scum that rises upmost when the nation boils.”
John Dryden, English Poet

The picture showing two Muslims – one of them a teenaged boy – hanging by a tree in Latehar, Jharkhandis going to haunt the Republic for a long time. Nothing indicts the failure of a criminal justice system like a lynch mob. Whether they may seem to reflect righteous anger or not, whether they operate by design or default, lynch mobs prove that the State has lost solecontrol over coercive power, the cornerstone of maintaining law and order. 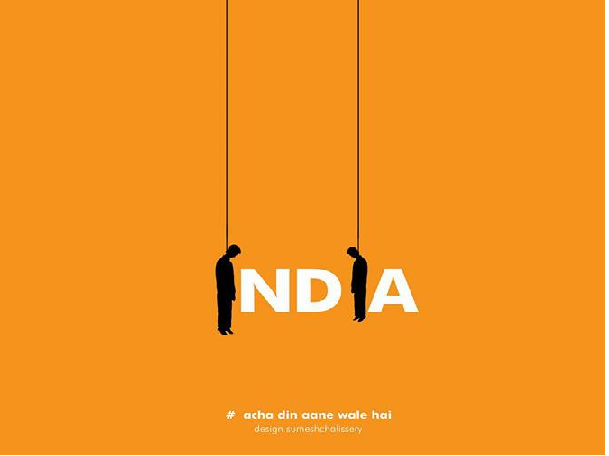 And, in this case, the lynching was by design. But first, lets look at some facts of the case. The victims were cattle traders. Self-designated vigilante groups, moonlighting to protect cows, which sacred to Hindus, the majority religion of India, apparently killed the two traders. One of the five arrested suspects,Mithilesh Prasad Sahu, is, in fact, a member of a cow protection committee, something disclosed by the Latehar Police Chief AnoopBirtharay. These vigilantes are nothing new to the countryside, it must be noted. It is just that they were never this murderous before the incumbent regime came to power.

And it is here that the design enters the frame. The Latehar lynching is not the first one. The murders started in Dadri, a village in Uttar Pradesh, thousands of kilometers away, in the outskirts of Delhi, the national capital. A lynch mob was organized there following open calls on a public address system of a temple against a family’s alleged consumption of beef.

And, despite the media controversy that followed in its wake, the lynching was not going to be the last beef murder either. The scene of action soon shifted to Himachal Pradesh, where a Muslim man was killed by ‘villagers’over the suspicion of cow smuggling.

And, the next murder was reported from Haryanawhere armed vigilantes attacked a group of migrant workers based on the suspicion of the workers having smuggled cows. It is just that this time the mob arrived along with the police, as admitted Mr. Hanif Qureshi, Inspector General of Police, Karnal. The Officer went on to admit that it is normal practice in Haryana for cow protection volunteers, working in coordination with police authorities, to nab cattle smugglers. Such close cooperation between police and beef vigilantes is not surprising, in a state ruled by the BhartiyaJanta Party, the right wing Hindutva outfit currently in power of the Union government as well.

And thisisonlyrecounting the cases wherein the mobs could kill, not instances where the Muslims were “merely” beaten up or even arrested, like this one in Rajasthan last week.

The killings do not augur well for the Republic, already beleaguered by increasing violence from right wing Hindutva forces. Worse, it does not augur well for the Republic’s criminal justice system, which had somehow successfully maintained thefacade of being a functionalsystem, despite its institutional failures making it so similar to those of Banana Republics. It had largely failed to deliver justice till now. And now, it has begun failing to curb injustices like beef murders being committed by murderous mobs despite, often, being well informed about them.

The mobs have not come out of a vacuum. Conditions have beenripe for long; hardly ever in India has anyone been punished for their role in mob crimes – be it mobs killing people over some emotive issue in countless riots or violent mobs taking a whole state to ransom and killing and maiming people for some socio-political demand. Unlike the new-age Hindutva vigilantes, however, most of these mobs did not have specific and long-term plans.

Also, seldom did these mobserupt and indulge in violence across the country, in actions that range from synchronised lynch mob attacks to lone wolf attacks. They did not erupt in this manner because they were not always this sure of the political protection they have now.

Once the lynch mob takes over, it does not leave anyone, not even those instrumental in unleashing the mob. Today it is beef, tomorrow it may be chicken. Remember Uma Bharati, now Union Minister, doing exactly that as Chief Minister of Madhya Pradesh? Yes, she indeed had declared three cities as “holy” and banned sale of liquor and meat there.

Herein lies another sad comment on the civil society’s failure tocomprehend the urgent needforlegal and criminal justice institution re-engineering in India. Rather than embrace and espouse this need, the civil society often jumps from outrage to outrage on issues,to the extent of legitimising this outrage as a source of law-making, as evidenced by the recent passage of the Juvenile Justice (Care and Protection of Children) Bill, 2015. Ultimately this is what the righteous outrage over the infamous 16 December gang rape and murder of a young student in Delhi brought about, a decision to punish children as adults.

And, if outrage is the way for the civil society to handleall issues, rather than constructive institutional rebuilding, what say now that this same method is employed for the right wing fanatics too, who only take their sense of outrage up a notch, and murder those they oppose.

It is the absence of a fair and functioningjustice system that creates such a sense of outrage, and allows for lynch mobs to run rampant, and for a government to support such mobs.

The writing is on the wall. The beef murders are just the beginning of a long and arduous process, wherein the final pretence of our justice institutions will collapse.

The only way out is to transform our outmoded institutions.

« INDIA: Who will bailout this Magistracy, jailed in whimsy?

PAKISTAN: Two years have passed still the student leader is missing, the government failed to fulfill its responsibility »