Home / News / AHRC TV: Escalation of violence in the Philippines and other stories in JUST ASIA, Episode 201

AHRC TV: Escalation of violence in the Philippines and other stories in JUST ASIA, Episode 201 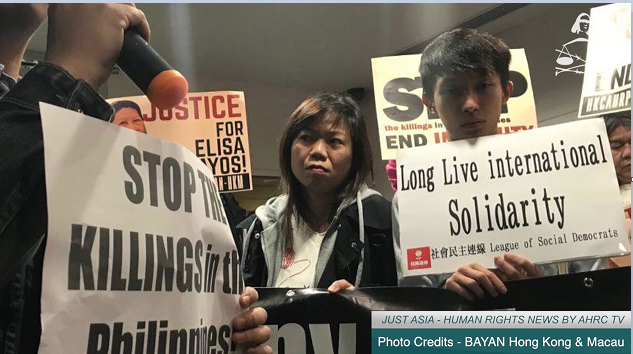 This week Just Asia begins with the Philippines, where extrajudicial killings have been escalating since President Duterte’s declaration of all-out war against government critics. Last week at least 10 persons were killed, including two church leaders, Fr. Tito Paez and Pastor Leovelito Quiniones. Soldiers shot Pastor Leovelito on December 3, accusing him of being a member of the militant New People’s Army. In Mindanao, the army killed eight indigenous persons who reoccupied their ancestral lands grabbed from them by a private company.

A solidarity protest action was held at the Hong Kong Philippines consulate general on December 6, by the Hong Kong Campaign for the Advancement of Human Rights in the Philippines (HKCAHRPP), Promotion of Church People’s Response – Hong Kong (PCPR-HK) and BAYAN Hong Kong & Macau.

In Pakistan, the military and its intelligence agencies are targeting peace activists and students. Recent days have seen the abduction of prominent peace activist Mr. Raza Khan, and Balochi student Sagheer Ahmad. Prior to his disappearance, Khan had attended a discussion about the recent sit-in staged by religious groups and the government’s subsequent capitulation to it.

Next, Nepal concluded the second phase of elections to the House of Representatives and provincial assemblies on December 7. Though the elections were conducted peacefully, specific security concerns and violence occurred. The extended period of stalemate facing Nepal in all aspects has ended with completion of these elections. The government of Nepal must now look at the bigger picture of what serves the country best.

In Indonesia, hundreds of human rights activists and academics gathered in front of the Presidential Palace on December 7 to commemorate international human rights day. They urged President Joko Widodo to publicly reveal why his government has failed to settle any human rights cases in the three years of his administration. Mr. Albert Hasibuan, a senior human rights lawyer, shares a statement on behalf of the protesters.

PAKISTAN: Clemency is no way to curb terrorism »