Home / News / PAKISTAN: Clemency is no way to curb terrorism

PAKISTAN: Clemency is no way to curb terrorism 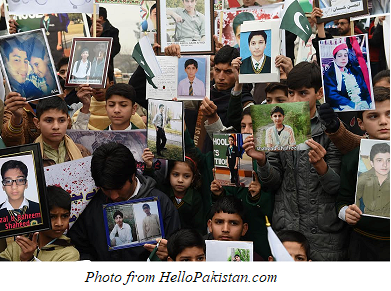 The month of December in Pakistan is akin to March for the Romans, when an empire was brought down. The historic day of December 16 has been particularly bloody, as it was on this day that the country’s East wing was separated after horrific Pakistani military action against the people of Bangladesh. Forty-three years later, on December 16, 2014, Pakistan witnessed another bloodbath when 150 school children and staff of the Army Public School in Peshawar were murdered in cold blood at the hands of terrorists inside a military controlled area.

Instead of punishing the culprits of the school attack, the government of Pakistan, in a confused daze, is reportedly planning to give clemency to the mastermind of the attack, Ehsanullah Ehsan, who is reportedly in the custody of security agencies. According to the news appearing in all local dailies, the Peshawar High Court has barred the government from releasing the ex-Tehreek-e-Taliban Pakistan (TTP) spokesperson, involved in many terrorist attacks and killings for over a decade. 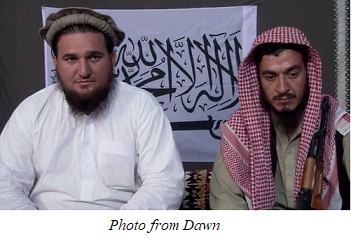 The decision was taken by a two-member bench headed by Chief Justice Yahya Afridi, during the hearing of a writ petition filed by Fazal Khan, the father of a student killed in Peshawar school attack.

To give clemency to Ehsanullah Ehsan, the self-professed mastermind of the attack on 145 innocent school children and staff, is preposterous. The proposition speaks volumes about the sordid state of affairs within the government, particularly the law enforcement agencies. While the state security agencies are allowing militants to go scot-free, many innocent languish behind bars for crimes they have never committed. At the same time, these security agencies receive a lion’s share of the national budget, even as 22.6 million children remain out of school in Pakistan because the education budget is so paltry.

Glamorizing terrorists as born again saviours of humanity is the new tactic adopted by the state to abet home grown terrorism. Those who dare demand their rights are shunned as separatists, while radicals who commit barbarity are released on the pretext of being innocent.

By glorifying ex Taliban spokesperson Ehsanullah, the government is suggesting to the general public that if they join state approved terrorist organizations, they have a better chance of being absolved of their crime, than if they are associated with a separatist group.

The captured spokesperson for Jammat ul Ahrar, a splinter group of the Taliban, claimed in an interview that Afghan and Indian intelligence agencies have been using and funding Pakistani Taliban (Tehreek-e-Taliban Pakistan; TTP) to launch terrorist attacks in Pakistan. According to him, the TTP leadership received funds from India and carried out terrorist attacks in Pakistan at their behest. Why then, is Ehsan being released? The answer must lie in the fact that the intelligence agencies are using these militant groups for their own ends.

What political mileage the state wishes to garner with Ehsanullah’s release remains to be seen. The state policy of alliance with militants and aligning state policies to their dictates has made the situation dire. As the election year nears, the state and the military are increasingly getting cozier with religious militants, and paving the way for their mainstreaming in the political landscape.

The explanation given for this absurdity is that it is better to give political leverage to the militants, to curb their tendency of resorting to violence to propagate their ideology. By allowing these factions to contest elections, as witnessed in by-elections of NA 120, Lahore, a few months back, where the militant Labaik Ya Rasool ul Allah party won a total of 7000 seats and stood third in the polls beating the leftist Pakistan People’s Party, the state is leaving people at the mercy of fanatics and zealots. Many religious extremists have in this way become political leaders, such as Pir of Sial Sharif, Muhammad Hameeduddin Sialvi, and even Hafiz Saeed.

The state is also not above seeking help from militants to gain grounds with voters. In 2010 for instance, the Punjab state administration made a secret deal with Akram Lahori, a terrorist belonging to the banned organization Lashkar-e-Jhangvi, so as to win the Bakkar by-elections. In exchange, Lahori received perks in a Punjab prison, and no trial has been initiated against him.

Giving clemency to terrorists has made a joke out of the National Action Plan, which was promulgated with much fanfare soon after the Peshawar school attack as the way to end militancy and terrorism. Only recently two hardcore and dangerous militants managed to literally walk out of the jail right under the “watchful gaze” of the guards stationed at the gates of the Karachi Central Jail.

Despite claiming a major chunk from the national budget, the law enforcement agencies have failed miserably at protecting the citizens of Pakistan, which is the first and foremost duty of any civilized state.

At the third round of the Universal Periodic Review, the government of Pakistan maintained the stance that there are no safe havens for militants in the country, and nor does the state abet such factions; the ground reality entirely negates this. The successful inroads that militants are making in politics, the last stronghold of Pakistan’s democratic set up, speaks volumes about the state of affairs to come.

The Asian Human Rights Commission is greatly distressed by these recent developments in the country, and calls upon state policy makers and think tanks to adopt a serious and proactive approach to curbing terrorism and militancy. Clemency for terrorists is hardly the way forward in promoting justice or peace.

« AHRC TV: Escalation of violence in the Philippines and other stories in JUST ASIA, Episode 201