Home / News / AHRC TV: Extrajudicial killings on the rise in Sri Lanka and other stories in JUST ASIA, Episode 194

AHRC TV: Extrajudicial killings on the rise in Sri Lanka and other stories in JUST ASIA, Episode 194 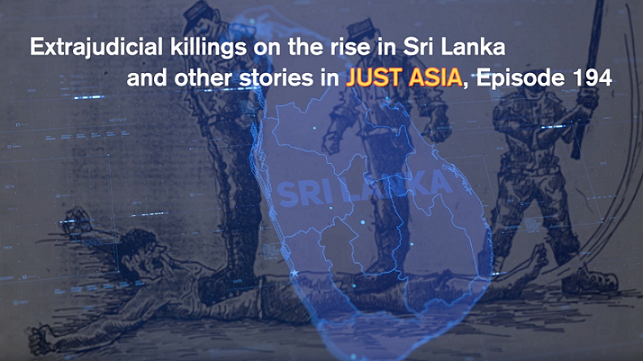 This week Just Asia begins with Sri Lanka, where a man was shot dead Monday by the Special Task Force of the police while travelling with his friends in a car. The police later claimed that they only began firing after the vehicle fired on them first, but there is no evidence to support this claim. Last week the Asian Human Rights Commission issued a statement documenting 10 extrajudicial killings in the country within the past 12 months. Just Asia speaks to Basil Fernando, the AHRC’s Director for Policy and Program Development for further analysis.

Next, a sessions court in Pakistan sentenced three Ahmadis to death on blasphemy charges. The court verdict came within hours of a hate speech delivered at the National Assembly, denigrating the much persecuted Ahmadi minority for being a threat to Pakistan’s national ideology. This brings the total number of persons charged with blasphemy on death row to eight. Pakistan lifted its moratorium on the death penalty in December 2014, and some 600 persons have been executed since then.

In Nepal, a contempt of court case has been filed at the Supreme Court against Inspector General of Police Prakash Aryal, accusing him of ignoring the top court’s order to detain murder-convict Bal Krishna Dhungel, a CPN (Maoist Centre) leader. The case was filed by senior advocate Dinesh Tripathi, claiming that failure to arrest the murder convict is a willful disobedience and gross negligence on the part of the government’s law enforcing agency.

Moving to Indonesia, this month marks three years of President Joko Widodo’s administration after his inauguration on 20 October 2014. It is unfortunate that the past three years have seen little improvement in the protection of human rights in Indonesia. None of the nine cases of past human rights abuses have been investigated by the Attorney General, with the President making no effort to move the process along. In the past three years, the government has executed 18 death row inmates. There has also been no improvement in the situation of Papua, where human rights violations against indigenous persons continue, while police and military officers enjoy impunity.

Next, the Indian Navy has initiated proceedings to discharge sailor Sabi Giri, on grounds that she had undergone sex reassignment surgery last year. It is ironic and unfortunate that while Sabi was recruited by the Navy without any experience or training as a man, as an experienced woman, she is no longer welcome. Giri wants to challenge her discharge, willing to take the fight for her rights to India’s Supreme Court. It is illogical and discriminatory for the Indian Navy to continue to permit women to only serve in a limited capacity, and it is hoped that this case can change the narrative.