This week Just Asia begins with Pakistan, where a teenage student, Tania Khaskheli, was murdered for turning down a marriage proposal from an influential feudal lord in Sindh province’s Sehwan city. The Sehwan police only filed murder charges after strong civil society protest. While two persons have since been arrested, the feudal lord is still at large. 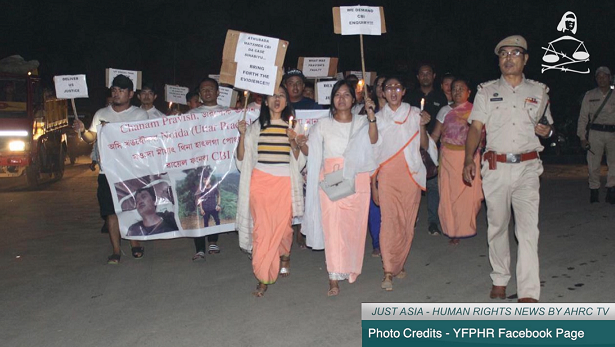 A protest rally was held in Manipur, India, on September 18, demanding proper investigation into the mysterious death and cremation of a 22-year-old youth, Pravish Chanam. There are suspicions that Pravish’s organs may have been trafficked, in collusion with the Uttar Pradesh Police and the Hospitals Authority. Protesters are thus calling for India’s Central Bureau of Investigation to take over, and look into the relevant police and hospital lapses in the case. They are also calling for the hospital post mortem videos to be released.

Next, an anti-Communist mob in Indonesia attacked the Indonesia Legal Aid Foundation’s office building in Jakarta over the weekend. The mob accused persons inside of being Communists and of attempting to re-establish the Indonesian Communist Party (PKI). In actual fact, survivors of past human rights abuses and human rights defenders had organized a seminar on the 1965-66 massacre of Communists on September 16-17 at the office building.

An inter-caste marriage in Nepal resulted in the abduction of the Dalit groom, Bal Bahadur, and the assault of his parents, while the non-Dalit bride Ramma Shahi, has been taken away by her family. Although Bal managed to escape his captors, he is currently in hiding. The majority of inter-caste marriages in Nepal face violence and social ostracism, forcing such couples to live in hiding, away from their residences.

Cambodia’s Information Ministry has threatened Radio Free Asia journalists with arrest if they continue to report for the U.S.-funded broadcaster after it closed its bureau in Phnom Penh last week. Radio Free Asia President Libby Liu issued a statement on September 12 announcing that the news broadcaster had been forced to close due to the government’s mounting crackdown on independent voices ahead of the 2018 elections.