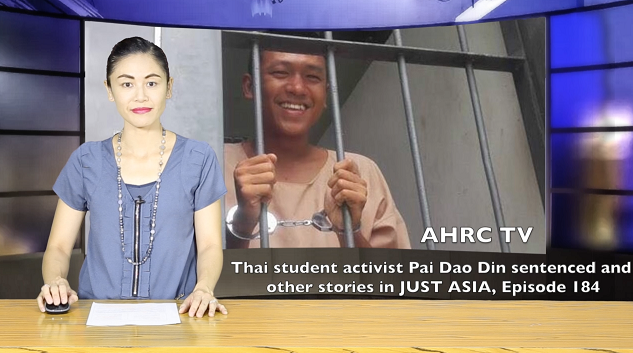 This week Just Asia begins with Thailand, where student activist Pai Dao Din has been sentenced to two and a half years imprisonment for sharing a BBC biography of King Vajiralongkorn. Despite more than 2,000 people sharing the controversial BBC article on Facebook and millions reading it, Jatuphat was the only one arrested for lèse majesté. A week earlier, a 61-year-old man was jailed for 18 years under the same law, while award winning journalist Pravit Rojanaphruk has been accused of sedition for his online comments criticising the military.

Incessant rainfall in southern Nepal is severely affecting the country’s Tarai region. Thousands of houses have been inundated across the Tarai, and 80 percent of arable land has been affected. Since last Friday, the death toll from floods and landslides has reached 123, with more than 35 persons missing. Without enough food, clean drinking water and shelter, many flood displaced people are at high risk of contracting various diseases. Many people are suffering from diarrhea. The flood victims are also in a dire need of essential medicines and health workers.

Moving to Pakistan, a nine-year-old child, Hamid, was crushed to death by the motorcade of former prime minister, Mr. Mohammad Nawaz Sharif, during a protest against the Supreme Court’s decision to disqualify him from his post. The motorcade did not bother to stop and carry the injured child to hospital, despite many ambulances and police vans being present. The child lay injured on the road for some time, before bystanders carried him to a hospital, where he succumbed to his injuries.

Moving to India, filmmaker Divya Bharathi has been forced to leave her home state of Tamil Nadu after repeated threatening phone calls and suspected stalking, due to her film on manual scavenging called ‘Kakkoos’. The film implicates the Dean of a well known Tamil Nadu university, and his supporters have attacked her for ‘besmirching’ the name of their community.