This week Just Asia begins with Bangladesh, where police have arrested several persons involved in the rape and torture of a teenager, after pictures of the victim and her mother at hospital with shaved heads caused outrage. Tufan Sarkar, a unionist linked to the ruling Awami League party, has been charged with raping the 16-year-old at home on July 17, where she was lured in pretense of signing some college applications. 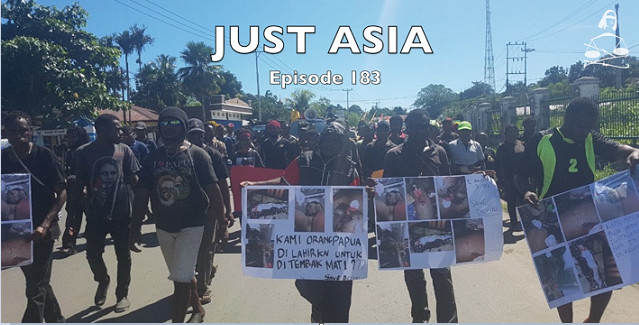 In Indonesia, police shot dead one man and injured several other people during a clash sparked by a construction worker’s refusal to take a dying man to hospital. Police deployed to handle the incident shot dead a 28-year-old man, Yulius Pigay. The shots also injured seven more people, including two children who sustained minor injuries. Previous cases of police violence against Papuans remain unaddressed, such as the shooting and murder against five students in Paniai regency of October 2014.

The darker side of Pakistan’s lawyers’ cartel was exposed in the case of law student Khadija Siddiqui, who was stabbed 23 times by her class fellow, Shah Husain, the son of a senior Supreme Court lawyer. After this horrific attack, Khadija could not find a single lawyer to take up her case. Instead of assisting Khadija in obtaining justice, senior Bar Association members harassed and threatened her to withdraw the case against their colleague’s son. Despite the odds, Khadija stood her ground and fought bravely for a year to get justice. Fortunately for Khadija, her assailant was sentenced to seven years imprisonment.

Moving to Nepal, a three-day photography training was organized in Kathmandu for human rights defenders from 4 – 6 August 2017. Held at Siddhartha Cottage, 20 participants from various organizations, including the UNDP and the Asia Foundation, attended. Prominent photojournalist and instructor Deependra Bajracharya was the key trainer, while veteran photojournalist Man Ratna Bajracharya was a guest speaker. The objective was to provide human rights defenders with photography skills to enhance their documentation of human rights abuses.

PAKISTAN: A tribute to Dr. Ruth Pfau: who successfully fought and controlled leprosy in country »