PAKISTAN: A tribute to Dr. Ruth Pfau: who successfully fought and controlled leprosy in country 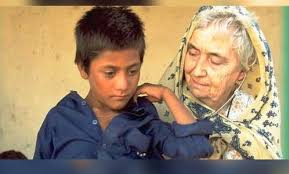 The 87-year-old, Pakistan’s Mother Teresa, who devoted her life to control leprosy in Pakistan is no more available at his 2nd floor small room in Marie Adelaide Leprosy Center (MALC), located in a densely populated area of Karachi.

Hundreds and thousands of admirers of Dr. Ruth Pfau are in great shock even the Canary bird, caged outside her room is silent. The German-Pakistani doctor and nun greatly helped Pakistan to achieve the target of controlling leprosy, set by the World Health Organization (WHO) in 1996.

Leprosy is one of the oldest diseases known to mankind. A very high level stigma is associated with leprosy. Many patients of leprosy, treated by the MALC, admitted that stigma is a real phenomenon in their lives that really affect their physical, psychological, social and economical well-being. However, they gave full credit to Dr. Ruth Pfau who helped them and made positive changes in their lives through her inspirational personality.

It was around fifty seven years ago when a young and charming German lady came to Pakistan and experienced the plight of leprosy patients. She convinced the government and then bosses of the health care management system to start a National Leprosy Control Programme in partnership with Marie Adelaide Leprosy Center (MALC).

It was only the vision of Dr. Ruth Pfau, who was also the recipient of a number of prestigious national, regional and international awards including Sitara-e-Quaid-e-Azam, Hilal-Imtiaz, Hilal-e-Pakistan, Ramon Magsaysay Award and BAMBI Award, that made possible the establishment of 157 Leprosy Control Centers from Karachi to Kashmir.

“In a society where people tend to avoid any contact with a leprosy patient it was the Pakistan’s Mother Teresa who helped cleaned the deformed patients and provided them decent employment opportunities, a rehabilitated patient of MALC remarked.

Indeed, like Mother Teresa, Dr. Ruth Pfau helped and supported the unloved and uncared people with sheer dignity. High ranking government officials, including the Chief Minister Sindh and civil society representatives visited the Karachi based MALC head office and paid rich tribute to their founder for her life-long cause, serving the unserved.

One of my conversation with a MALC doctor, who extensively travelled with the great lady, he recalled that she happily spent much time with the leprosy patients and their families. He also mentioned that Dr. Pfau always showed her pleasure because of the positive physical and psychological changes made in the lives of her patients.

Dr. Pfau was the great admirer of Pakistan and the people of the country. She came to Pakistan in 1960 and in 1988 she was granted Pakistani citizenship. She spent more than a half century of public service and finally went on his eternal journey.

The President of Pakistan, Mamnoon Hussain, expressed deep sadness at the death of Dr. Pfau. In her message, the President said, “The Pakistani nation pays tribute to Dr. Pfau’s selfless efforts”. In recognition of her services the Government of Pakistan has announced a state funeral for the German physician, also regarded as one of the most visionary social activists in Pakistan. She will be laid to rest in a Christian Cemetery, located at Shahrah-e-Faisal, Karachi.

The writer is a Fulbright Fellow, specialization in International Development. He is a Development Consultant and Researcher. He can be reached at amirmurtaza@hotmail.com.