This week’s episode begins with the death of Abdul Sattar Edhi, a philanthropist known as Pakistan’s “Father Teresa”. Edhi died after a prolonged illness on July 8. Edhi spent his life building up an organization that has fed, clothed, offered medical services, and provided shelter to many Pakistanis. From a single ambulance, the Edhi Foundation’s air and land ambulance fleet became the largest in the world, with over 1500 ambulances serving those in need. Edhi helped people regardless of their religion or creed, stating that ‘the ambulance does not discriminate’. He set up cots outside the many Edhi centers, saving thousands of innocent babies born out of wedlock. Abdul Sattar Edhi has shown by example how to selflessly serve humanity; may he rest in peace. 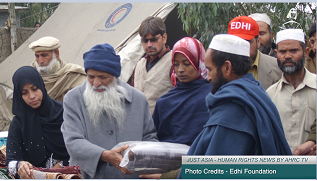 Moving to Thailand, a Prachatai journalist has been detained by police while reporting on the activities of the New Democracy Movement (NDM), in Ratchaburi Province. Three NDM activists have also been detained. The four were detained after the police searched the activists’ car and found copies of an NDM booklet which provides information on the draft constitution which counters that of the junta.

In Indonesia, the enactment of Law No. 16 of 2011 on Legal Aid was expected to protect people from torture, particularly the poor. There continue however, to be many cases of torture in police custody, mostly targeting suspects who face the judicial process without lawyers, because of a lack of funds. The legal aid system operating under the Minister of Law and Human Rights faces the crucial problem of a limited budget. For this reason, the government should seriously evaluate the legal aid project. To learn more, Just Asia speaks to Programme Officer Chris Biantoro.

Moving to India, Kerala’s female textile workers are demanding the basic right to sit and take toilet breaks during their grueling 12-hour long work days. According to a complaint filed with the National Human Rights Commission, many workplaces do not even have toilets for their employees to use. The workers are also demanding that they be paid according to the 2009 Notification under the Minimum Wages Act, 1948, amounting to Rs. 7145, whereas they are presently only paid between Rs.3000-4000 per month.

INDIA: Cow worshippers chew up the rule of law »