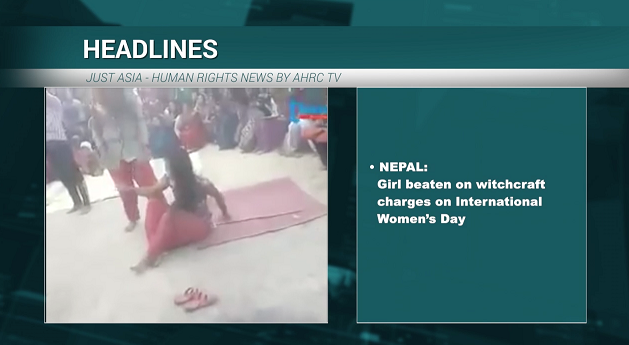 This week Just Asia begins with Nepal, where 18-year-old Radha Chaudhary was mercilessly beaten on witchcraft charges, while the world was celebrating International Women’s Day. Led by Ram Bahadur Chaudhary, a self-professed shaman, the horrific beating can be seen in a widely circulated video. None of the spectators bothered to rescue the innocent girl or call the police, indicating a collapse of societal consciousness in the country. Despite Nepal’s Anti-Witchcraft Act of 2015, illiteracy, lack of awareness and harmful socio-cultural practices continue to victimize innocent women.

Next, a shocking development in India saw the acquittal of 25 men accused of a 2009 pub attack. Pramod Muthalik and other members of the radical group Shri Ram Sene entered a pub in Mangalore, threatening, attacking and driving out patrons, ostensibly for having ‘loose morals’. Although the attack was caught on video, the trial court in Mangalore acquitted all the accused for lack of evidence.

Next, the Hong Kong based Asian Human Rights Commission and the South Korean May 18 Memorial Foundation have announced a Draft Asian Declaration on the right to justice. The Declaration is a supplement to the existing Asian Human Rights Charter, on the occasion of the Charter’s 20th anniversary in May 2018. It focuses on the particular obstacles found in many Asian countries that prevent the implementation of the right to remedy. Just Asia speaks to Basil Fernando, the AHRC’s Director of Programs and Policy Development, for details.

In Burma, the bodies of two civilians last seen in military custody have been found in a shallow grave in Kachin State, where fighting between government forces and an ethnic armed group is ongoing. According to a community leader, the two ethnic Kachin men lived in a refugee camp in Mai Hkawng village and were taken away by soldiers on January 31 while working on a nearby farm. Rights groups and the victims’ families are demanding an investigation into their deaths.

In the Philippines, land and environmental rights defenders are increasingly under attack. Most recently, Ricardo Mayumi was shot dead on March 2, after opposing a hydroelectric dam project. While an investigation is underway into Mayumi’s killing, no witnesses have been identified, said a police spokesman. Mayumi’s killing comes at a time when the Philippines government filed a court petition seeking the declaration of more than 600 people, including activists and a United Nations special rapporteur, as “terrorists”.

In Indonesia, the police investigation into the acid attack against senior anti-corruption officer Mr. Novel Baswedan, has still not identified the perpetrators. Nearly a year after the attack, Novel and his family continue to wait for justice. Despite enormous public pressure to establish a fact finding team into the attack on the senior investigator of Indonesia’s corruption watchdog, President Widodo is still giving the police time to finish the investigation.

The bulletin can be watched online at www.alrc.asia/justasia and AHRC TV YouTube. We welcome both human rights feeds to be considered for weekly news bulletin, and your suggestions to improve our news channel. Please write tonews@ahrc.asia. You can also watch our Weekly Roundup on Facebook.

« INDONESIA: The UN Global Compact and Accountability of Trans-National Corporations