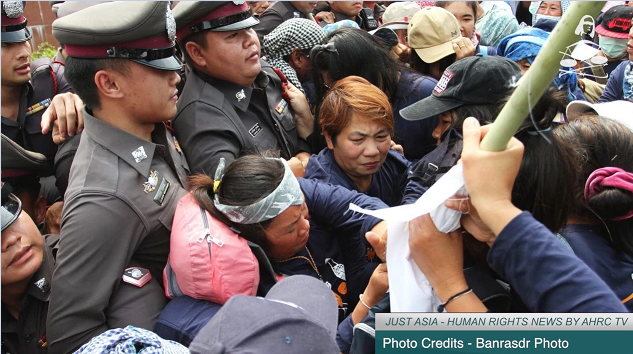 This week Just Asia begins with Pakistan, where police shot dead a 24-year-old rickshaw driver while allegedly chasing terrorists. The driver was later found to have nothing to do with any terrorists or gangs. Although the police officers have been arrested, no charges have been filed yet. This is the fourth police killing seen in Pakistan’s capital city of Karachi this year. Just Asia speaks to Lawyer Javeria Younes for her views.

Moving to Thailand, rights activists on Monday petitioned the Administrative Court for an injunction against harassment of their solidarity walk activity. The People GO Network launched the “We Walk…Solidarity Walk” to raise public awareness on issues concerning natural resources, alternative agriculture, health assurance, and the exercise of rights and freedoms. For more information, AHRC interviews Mr. Surachai Trongngam, a senior Lawyer representing the People GO Network.

India’s Supreme Court once again heard the case of Hadiya, the young woman who converted to Islam prior to marrying a Muslim man from Kerala, on Tuesday. In the latest hearing, the Supreme Court bench observed that the ongoing enquiryinto Hadiya’s husband, Shafin Jahan, and his links to radical groups, must have nothing to do with the legitimacy of her marriage. According to the Court, as an independent adult, Hadiya’s choice of husband cannot be investigated. This is a refreshing move by the Supreme Court in a case fraught with legal and ethical questions regarding the rights of an adult woman.

Next, a Burmese military tribunal has sentenced six soldiers to 10 years in prison for killing three civilians in war-torn Kachin state. While rights groups welcome the rare prosecution and punishment of the soldiers, they raised concerns about the trial being held behind closed doors. Burma’s military has been accused of violating human rights with impunity for decades, including in its conflicts with rebel groups. Most recently it has been accused of ‘ethnic cleansing’ against the Rohingya in Rakhine state.

Indonesia’s Shia congregation has been displaced from their hometown in Sampang, Madura Island, East Java province since 2011, when the government and police failed to prevent anti-tolerant groups from burning and demolishing their houses and property in Sampang. They are presently living in modest apartments provided by the local government in Soardjo regency. Not only have they faced economic and other difficulties over the last six years, but the government is reluctant to find a way to return them to their hometown.

« INDIA: Hunger used to be the biggest humiliation for the republic not long ago.