The Asian Human Rights Commission (AHRC) has received information from the Commission for the Disappeared and Victims of Violence (KontraS) concerning the death of a man in police custody in Bau-Bau. KontraS and Buton Raya Legal Aid Institute (LBH Buton Raya) reported that bruises were found on the victim’s body, raising the strong suspicion that he had been tortured. Fact-finding conducted by the two local organisations reveal that the victim was water-soaked upon the order of the Chief of the Bau-Bau District Police. 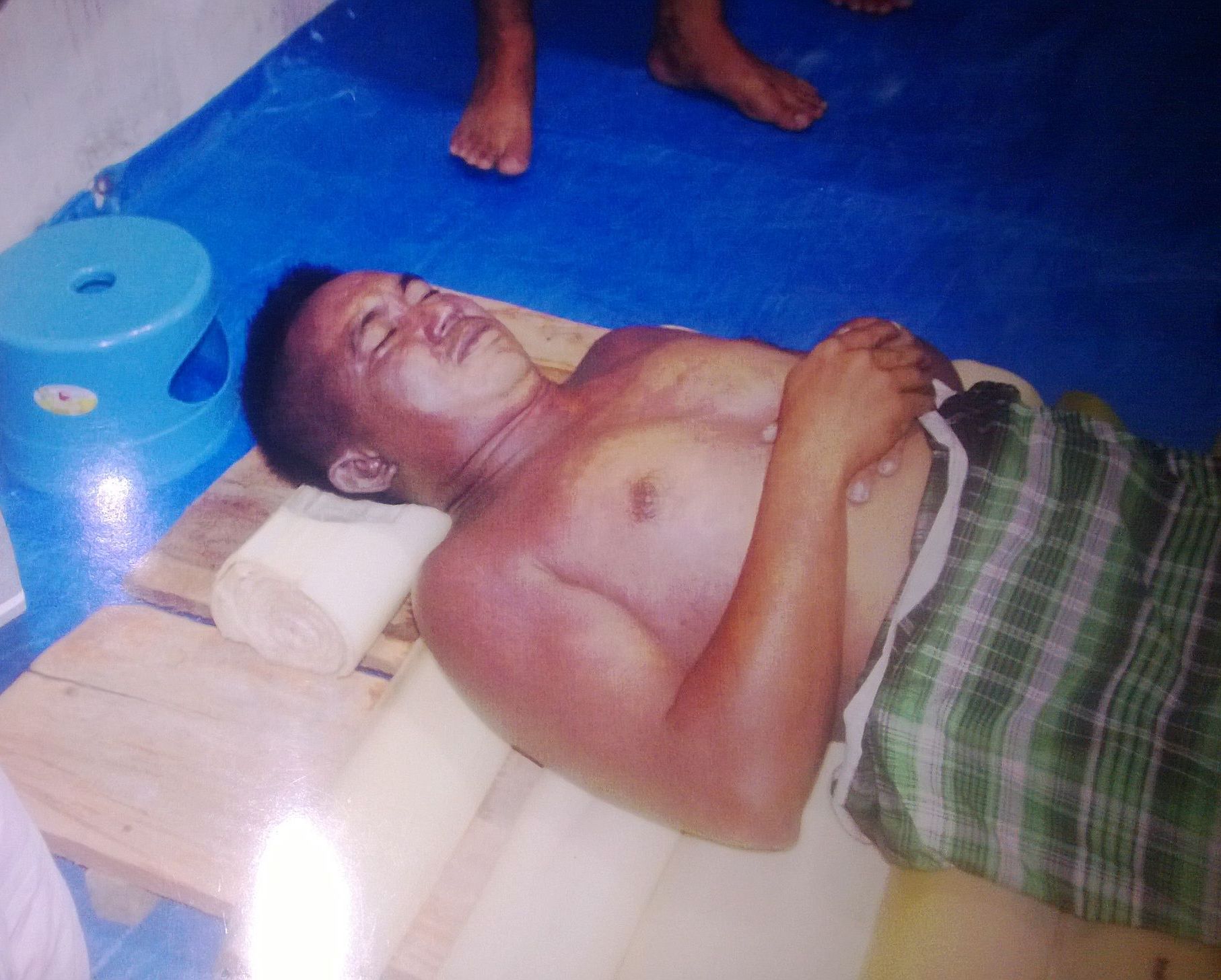 According to KontraS, on 29 October 2013 at about 9 p.m. Aslin Zalim was taken to the Bau-Bau District Police by five police officers. Three of them were identified as: Chief Police Brigadier Anton Winarso, Police Brigadier Yusuf, and Police Brigadier L.M. Yamin. No warrant was produced at the time of arrest. The family was informed that Aslin was arrested for ‘disturbing public order’, upon the order of the Chief of the Bau-Bau District Police, Joko Krisdiyanto. (Photo: Aslin Zalim was taken by the police on 29 October 2013 and found dead the next day. Courtesy: KontraS)

At 10 p.m. on the same day, Aslin Zalim’s wife and mother-in-law visited the District Police station, bringing some food and clothes for Aslin. Without providing any reason, the police did not allow them to see Aslin.

On the next day, 30 October 2013, at 7.30 a.m. the family was contacted and asked to come to Bhakti Medika Hospital, as Aslin had passed away. The police claimed that, in the morning, Aslin fell over as he was doing some morning exercises. They initially claimed that Aslin was later taken to hospital and died there. This contradicts the information provided by the hospital that Aslin was already dead on arrival. As reported by KontraS, on 7 December 2013, the Chief of the Bau-Bau District Police stated that Aslin died in his cell.

KontraS and LBH Buton Raya conducted a fact-finding investigation. The results led to the strong allegation that Aslin’s death was the result of torture by officers of the Bau-Bau District Police, under the orders of the Chief of the district police. KontraS found scratch marks on Aslin’s right back as well as bruises under his eyes and in the pubic area.

KontraS conducted interviews with the three detainees who were held together with Aslin. They revealed that about 10 p.m. on 29 October 2013 all of them were submerged in a pool by the Bau-Bau District Police. They remained there for 20 minutes to an hour. Soaking wet, Aslin was later put back into his cell without having any spare clothes to change. A witness told KontraS that at 2 a.m. on 30 October 2013, he saw that Aslin was having trouble sleeping and that his fingers and nails were turning blue.

The family and neighbours of Aslin conducted a protest in front of the Bau-Bau District Police on the evening of 30 October 2013. They demanded an investigation into Aslin’s death with the perpetrators being held accountable for their actions. Protesters were reported to be outraged by the statement of the Chief of the District Police. He had labelled the victim as drunken, a mugger and a thug. On 3 November 2013, Aslin’s grave was opened, his body exhumed and subjected to an autopsy. The results supported the allegation that Aslin was the subject of violence.

Regional Police of South-East Sulawesi set up a team to investigate the torture allegation and the suspicious death of Aslin, led by the Chief Deputy of the Regional Police. Several witnesses and seventeen police officers – including the Chief of the Bau-Bau District Police were summoned. The investigation concluded that there were violations of the code of conduct by an unconfirmed number of officers of the Bau-Bau District Police. The AHRC has not received any report that a criminal investigation is underway.

Indonesia is a state party to the International Covenant on Civil and Political Rights (ICCPR). One of the articles guarantees the right to life. Similarly, Article 28A of the Indonesian Constitution stipulates, ‘every person shall have the right to live and to defend his/her life and existence’.

Under international law, the right to life entails substantive and procedural obligations of the State. This means that the State has the obligation not to arbitrarily take away the life of an individual, but also to conduct effective investigations into cases on the death of an individual. This is particularly relevant in cases where there is allegation that state officials have been responsible for the death.

Indonesia has also ratified the UN Convention against Torture and other Cruel, Inhuman or Degrading Treatment or Punishment (UN CAT) but it is yet to criminalise torture. The Chief of the Indonesian National Police issued a regulation in 2009 calling for all members of the police to refrain from practicing torture. However, it does little in decreasing, let alone eliminating, police torture in the country.

Current practice is that torture cases are investigated by the police, even when the suspected perpetrators are the police officers themselves. This results in the low number of torture cases being brought before the courts. In exceptional circumstances, where a torture case is being examined in the criminal court, the perpetrators are typically given a lenient punishment. For further information on the issue of torture in Indonesia, please see the AHRC’s special report
‘A façade of justice for torture victims in Indonesia’.

The key witnesses in this case are the detainees who were held together with Aslin Zalim on 29-30 October 2013 at the Bau-Bau District Police Station. They are still being detained by the police, which puts them at high risk for death threats, should they speak against the accused police officers. It is therefore important to ensure that the detainees’ safety is protected, by moving them to a more secure and neutral detention facility.

SUGGESTED ACTION:
Please write to the authorities below asking for an independent, effective, on-going criminal investigation into the torture and death of Aslin Zalim. Adequate punishment should be imposed not only on officers who tortured Aslin but also on any state official ordering such abuse. Please also request the relevant authorities in Indonesia to ensure the safety of detainees who witnessed the torture and ill-treatment of Aslin Naslim.

INDONESIA: A man in Bau-Bau died under police custody, witnesses are at high risk

I am writing to voice my deep concern regarding the torture and death of Aslin Zalim, a 34-year-old civil servant in Bau-Bau, South East Sulawesi. According to the information I have received from the Commission for the Disappeared and Victims for Violence (KontraS), Aslin was taken by five police officers to the Bau-Bau District Police on 29 October 2013 at 9 p.m. for ‘disturbing public order’, upon the order of the Bau-Bau District police, Joko Krisdiyanto. Three of the five officers were identified as Police Brigadier Anton Winarso, Police Brigadier Yusuf, and Police Brigadier L.M. Yamin. There was no warrant produced at the time of arrest.

Aslin’s wife and mother-in-law visited the Bau-Bau District Police on the same night to get permission to visit him in detention. The police did not allow them to see Aslin without giving any reason. The family learned only in the morning of the next day, 30 November 2013, that Aslin had passed away and his body was kept at Bhakti Medika Hospital.

The police informed Aslin’s family that Aslin fell over when he was doing some morning exercises on 30 November 2013. They also initially claimed that Aslin passed away after he was taken to the hospital, contradicting the hospital’s claim that, when they received Aslin, he was dead on arrival.

I am aware that KontraS and Buton Raya Legal Aid Institute (LBH Buton Raya) have conducted fact-finding investigations whose results strongly indicate that Aslin had been subjected to torture while under police custody. They found scratch marks on Aslin’s right back as well as bruises under his eyes and in the pubic area. KontraS interviewed three detainees who were held together with Aslin. They revealed that all of them were forcibly submerged in a pool for 20 minutes to an hour on the night of 30 October 2013. Aslin was later put back into his cell, soaking wet with no change of clothes.

I appreciate the fact that a team was set up by South East Sulawesi Regional Police to investigate the torture allegation and suspicious death of Aslin Zalim. However, I note with concern that the investigation concluded that there were only violations of the police code of conduct. As a state party to the UN Convention against Torture and other Cruel, Inhuman or Degrading Treatment or Punishment (UN CAT), Indonesia is legally obliged to ensure that the practice of torture is criminally, and not merely administratively, punished. I wish to highlight that the failure to undertake an effective, independent, on-going criminal investigation into this case is also a violation of the UN CAT.

Given the above, I am urging you to take all necessary steps to ensure that an independent and effective criminal investigation of this case is taking place. The family of Aslin Zalim and their lawyers should be informed about any further developments in the investigation. All state officials responsible for the torture and death of Aslin Zalim, including those who ordered the abuses or failed to take measures to punish such abuses, should be criminally and proportionately punished. Since the key witnesses in this case are detainees under the Bau-Bau District Police, I am calling you to also ensure that their safety is guaranteed so that they will be willing to speak up against the police officers.