PAKISTAN: The AHRC asks UN working group to re-open the case of Ehsan Arjumandi, missing since 2009

The Asian Human Rights Commission (AHRC) has been actively following the case of disappearance of human rights defender Ehsan Arjumandi, a dual national of Norway and Iran, who has been missing since August 2009. For the past seven years, after he was picked up by the Pakistani security agencies, the whereabouts of Mr. Ehsan are unknown; the government of Pakistan, for its part, officially denies detaining him.

The manner of Mr. Ehsan’s arrest by State agencies is a matter of grave concern to the AHRC, as it is feared that he may have been killed as a result of torture. A Baloch-speaking army officer had confirmed to the family in 2010 that Mr. Ehsan Arjemandi was in Military custody in Malir Cantonment, Karachi. Since 2010, this is the only information the family received unofficially; Mr. Ehsan has not been produced in any court. He had been suffering from high blood pressure, Type 2 Diabetes, and Hepatitis C.

The AHRC has taken up the case with the Working Group on Enforced and Involuntary Disappearances (WGEID), by calling upon the Committee to intervene and ensure the safe recovery of Mr Ehsan from illegal confinement by the agencies and that his rights to a lawyer, access to his family, and necessary medical treatment, and protection from torture, in particular, are ensured by the State.

Subject: Request to reopen the case of Ehsan Arjemandi, activist, and citizen of Norway

This letter is in pursuance of our request to WGEID to reopen the case of Ehsan Arjemandi, a dual national of Norway and Iran, who has been missing since August 2009. The Asian Human Rights Commission (AHRC) requests the re-opening of the case involving Mr. Arjemandi, who is missing since 2009, his whereabouts unknown. 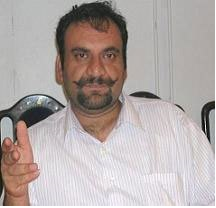 The details of his case are as follows: On August 7, 2009 Mr Ehsan was picked by a Pakistani intelligence agency while he was visiting his relatives living in Turbat and Mand districts, Balochistan Province. The government of Pakistan claims that it extradited Mr. Ehsan to Iran, a claim vehemently denied by the Iranian Government.

The Pakistan government has been lying about Mr. Ehsan’s whereabouts to his family, in order to silence them, while also threatening their lawyer of dire consequences for pursuing Mr. Ehsan’s case.

On 25 March 2014, Nasrullah Baloch, President of Voice of Baloch Missing Persons (VBMP) was threatened by intelligence agency officers for pursuing the case and discussing the matter with the Norwegian Mission, present at the Supreme Court during the hearing of case of missing persons.

As a consequence of absence of the rule of law and in direct contravention to Articles 9, 10, and 14, of the Constitution of Pakistan, enforced disappearances have become a common occurrence. In Balochistan alone, credible sources have claimed that more than 14,000 people are still missing, while the Balochistan provincial government officially recognizes less than 100 as missing.

To date, the Commission of Inquiry on Enforced Disappearances still has more than 500 cases of persons missing in Baluchistan that remain unresolved. Continuing cases of disappearances in several areas of Pakistan are not merely breach of the constitutional rights but also the violation of several universal human rights and international laws.

Article 9 of the International Convention For The Protection Of All Persons From Enforced Disappearances requires the state to take all appropriate actions to exercise jurisdiction over the offence of enforced disappearance if the alleged offender is its national.

It has been seven years since Mr. Ehsan was disappeared; he has never been presented before any court or tribunal. The Government of Pakistan has no legal or moral right to detain Mr. Ehsan in this manner; he is not a Pakistani citizen. He must be extradited to Norway or Iran two countries that have the jurisdiction in this matter.

We wish to call upon the Working Group on Enforced and Involuntary Disappearances take up the matter with government of Pakistan to recover Mr. Ehsan Arjumandi from the illegal and unconstitutional custody of the State.