PAKISTAN: Special report on grim situation of freedom of expression 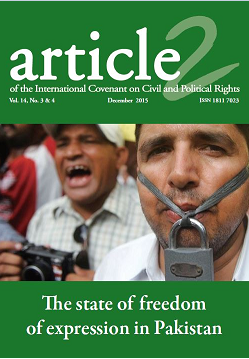 Since its inception, Pakistan has been marred with ideological warfare between the clerics and secularists regarding state ideology. The report notes that for the past 70 years, policy makers and legislators have been vying to cater to both sides, resulting in conflicting laws and policies.

Freedom of expression suffers the most in the tug of war of constitutional discourse. The Constitution and certain legislations authorize the government to curb freedom of speech on subjects that include the Constitution itself, the Armed Forces, the Judiciary, and religion. Harsh blasphemy laws have occasionally been used to suppress the media as well. Pakistan’s youth is discouraged from critical thinking, with the country’s education system itself limiting freedom of expression and thought.

While the space for free press has shrunk, attacks on journalists continue with impunity. The report analyses how courts also adhere to state policies of curbing free speech and thus limit the scope of any constitutional safeguards. Though courts understand the significance of free speech for the survival and sustenance of democracy, they have overwhelmingly held that such rights are not absolute.

The special edition also points out that journalists reporting from Balochistan’s conflict zone are soft targets for both the militants and the military. Journalists in Pakistan put their lives at risk every day, and many are labeled extremists or terrorists.

In view of the dire situation facing freedom of expression in Pakistan, this edition of article 2 is a small endeavour towards mobilizing society and making people aware of the curbs on their basic right. Through this report, the AHRC encourages political, legal and constitutional discourse on an issue that is often brushed under the carpet due to state coercion.

The online version of the issue can be viewed at; http://alrc.asia/article2/

INDIA: Jungle-raj in the police and judiciary »