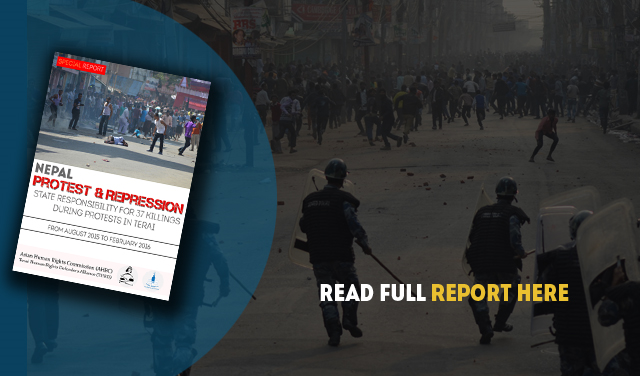 The Asian Human Rights Commission (AHRC) and Terai Human Rights Defenders Alliance (‘the THRD Alliance’) published today a report on the anti-Constitution protests from August 16, 2015 to February 5, 2016 in which over 40 people died.

The report focuses on the use of force by the Government of Nepal against protestors and bystanders. Based on credible eyewitnesses and documentary evidence, the report concludes that the security forces engaged in a consistent pattern of excessive use of force, resulting in the deaths of 34 people and three others died in situations where the police could have intervened to stop their killing by counter-protesters.

To date, no member of the security forces responsible for these serious human rights violations is known to be under investigation, let alone being prosecuted – once again reconfirming the deep-rooted problem of impunity in Nepal.

THRDA and AHRC investigated the protests and deaths in Tikapur (Kailali), Birgunj (Parsa), Janakpur (Dhanusha), Jaleshwar (Mahottari), Rajbiraj, Bhardaha (Saptari) and Rangeli and Dainiya (Morang) districts. While not investigating the two incidents in Tikapur (Kailali) and Bhagawanpur (Mahottari) in which protestors were responsible for the killing of 8 police and one APF officer, the AHRC and THRD Alliance condemn these killings in the strongest terms.

The report demands independent investigations, prosecutions, and reparation in the cases by both side and measures as required by law, and urges the Government of Nepal to fulfil its obligation to address the long-identified institutional and systemic problems in law enforcement agencies that have lead repeatedly and tragically to the unnecessary loss of life and the arbitrary restriction of civil and political rights.

The report in English can be found at http://alrc.asia/ahrc/sr/nepal/teraireport/.

SRILANKA/ASIA: Preliminary observations and recommendations of the Special Rapporteur on torture and other cruel, inhuman and degrading treatment or punishment, Mr. Juan E. Mendez »