Analysis of the Head of the NCPO Order no. 9/2562 that repealed some Announcements/Orders that are no longer necessary 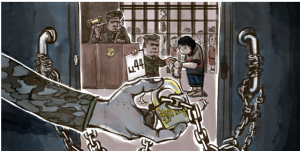 Below is the analysis by Thai Lawyers for Human Rights (TLHR) regarding the implications of Head of NCPO Order no. 9/2562.

Military authorities will retain the power to summon individuals to report themselves, to appre­ hend individuals who commits flagrant offenses, and detain them for up to seven days, to search, forfeit and freeze assets invoking the Head of the NCPO Order no. 3/2558 and no. 13/2559.1

On 1 April 2015, the NCPO issued the Head of NCPO Order no. 3/2558, which authorized military authorities to detain individuals, most of whom had their liberties deprived of in military barracks.

The exercise of such power has been euphemistically defined by the authorities as “attitude adjustment.” Throughout the past five years, at least 929 members of the public have been summoned by the NCPO and detained in military barracks for “attitude adjustment” (for more
detail, please see 6 years under NCPO, enough is enough? Recommendations to rid the coup’s remnants).

TLHR finds the exercise of such power should be restricted to emergency situations when an imminent harm against the nation is impending and should be confined to certain areas – which has not been the case over the past five years.

The retention of the Head of NCPO Order no. 3/2558 and no. 13/2559 to continue authorizing military authorities to detain an individual up to seven days in an undisclosed place without access to family or lawyer and without judicial review, increases the risk of arbitrary detentions in breach of Article 9 of the International Covenant on Civil and Political Rights(ICCPR) and may result in other forms of human rights violations, such torture and enforced disappearance.

In its Concluding observations on the second periodic report of Thailand, the UN Human Rights Committee recommended that Thailand amend Head of the NCPO Order no. 3/2558 to ensure that it complies with all the provisions of the ICCPR, including with the guarantees against incommunicado detention.

2. Disobeying and showing defiance to NCPO summons are still criminalized

Despite the NCPO’s repeal of the ban against political gathering of five or more persons, disobeying and showing defiance to NCPO summons are still criminalized under NCPO Announcement no. 41/25572. To date, the NCPO has summoned 2 at least 472 individuals to report themselves, and at least 14 of them who have defied such summons have been issued with arrest warrants that remain effective.

Once individuals report themselves to the NCPO, they are often held in incommunicado detention in military barracks. Their fate and whereabouts are unknown to people outside. This makes them vulnerable to torture. Without judicial review and given that they would have to later stand trial in military courts, many individuals who were summoned decided to leave the country. As a result, since the May 2014 coup, 86 individuals have become political exiles (for more detail, please see Collapsed Rule of Law: The Consequences of Four Years under the National Council for Peace and Order for Human Rights and Thai Society, Part 3)

TLHR recommends that NCPO Announcement no. 41/2557, which criminalizes individuals’ defiance or disobedience to the summons to report themselves, be immediately repealed and that all prosecutions pursuant to this decree be stopped.

3. Transferring cases against civilians from military to civilian courts

The Head of NCPO Order no. 9/2562 has led to the repeal of NCPO Announcements no. 37/2557, no. 38/2557, no. 43/2557, and no. 50/2557, and Head of NCPO Order no. 55/2559. As a result, cases against civilians that are being tried in military courts will be transferred to the Court of Justice. It would effectively make the previous proceeding in military courts part of the further proceedings of the Court of Justice, which would continue to hear the cases.

Over the past five years, at least 2,408 civilians have been tried in military courts nationwide (for more detail, please see 6 years under NCPO, enough is enough? Recommendations to rid the coup’s remnants). TLHR is offering legal assistance to defendants in 59 cases prosecuted in military courts, 21 of which involve 41 defendants.

TLHR remains concerned about the following ongoing negative impacts of prosecutions of civilians conducted by military courts under the NCPO.

3.1 Cases which have reached a verdict, but the right to a fair trial was not upheld

Ongoing cases as well as cases that have reached the final verdict in military courts, have not been heard in fair trials, and no remedy for the violation of this fundamental trial has been established.

The right to a fair trial is guaranteed by Article 14 of ICCPR, which underscores particularly the principles of judicial independence and impartiality. Military courts flout such principles because they operate under the authority of the Ministry of Defense and two thirds of their presiding judges are commissioned military officers who are not required to obtain a law degree.

In addition, over the past five years, military courts’ proceedings have been exceptionally protracted.

Some defendants prosecuted for alleged violation of Article 112 of the Thai Criminal Code (lèse-majesté) remain detained awaiting trial and their hearings were conducted behind closed doors. Those convicted by military courts for violating Article 112 have been sentenced to prison terms that have been twice as harsh as sentences imposed by civilian courts (for more information, please see 20 reasons why civilians should not be tried in the Military Court).

3.2 Defendants tried in military courts are barred from appealing their sentences

Apart from hearing the cases, military courts have also issued arrest warrants for suspects who remain large. As of 30 November 2016, over 528 individuals were still wanted by military courts nationwide (please see Why will Thanathorn have to stand trial in the Military Court?: Getting to know the Military Court under the NCPO Era). To ensure these individuals will stand trial in proceedings that uphold the principles of judicial independence and impartiality, TLHR recommends that the existing warrants be rescinded and new warrants be issued by the Court of Justice.

Only 70 (12%) of the 557 decrees issued by the NCPO are being repealed. Most of the NCPO Announcements and Orders remain in effect and can only be repealed or amended by laws, except for the Announcements or Orders concerning the exercise of administrative powers, whose repeal and amendment are subject to the executive power of the Prime Minister or the
Cabinet.

In addition, all the Announcements and Orders and acts of the NCPO are made legal and constitutional by Sections 279 of the 2017 Constitution. Even after the imminent dissolution of the NCPO, the NCPO cannot be held accountable for violations that resulted from its Announcements, Orders or acts.

TLHR deems that NCPO decrees have no place in the legal system because they lack proper checks and balances. The retention of legal provisions that justify a lack of accountability in all circumstances contributes to fostering a culture of impunity in total breach of the principles of the rule of law.

TLHR believes the Head of NCPO Order no. 9/2562 repeals only some Announcements and Orders which are no longer useful for the NCPO, but it does not serve public interest because the military authorities retains significant powers, including the power to restrict people’s rights and freedoms, for example under the Head of NCPO Order no. 3/2558 and no. 13/2559, among others.

In addition, the NCPO is set to expand the power of military authorities in a variety of public affairs concerning civilians. In particular, the Head of the NCPO Order no. 51/2560 on the amendment of the Internal Security Maintenance Law increases the powers of the Internal Security Operations Command (ISOC) and bolsters budget and structure of the regional and provincial ISOCs.

To address the coup’s remnants, the repeal of some NCPO Announcements/Orders is insufficient.

Rather, an effort has to be made to systematically restrict powers of the military as a whole. In addition, it is necessary to address the problematic NCPO Announcements/Orders, laws endorsed by the National Legislative Assembly (NLA), court verdicts, justice system reform, and remedies for victims (for more detail, please see 5 years under NCPO, enough is enough? Recommendations to rid the coup’s remnants) Concerning the NCPO decrees and the judicial process, TLHR wishes to make the following recommendations to the House of Representatives;

1. Repeal Articles 265 and 279 of the 2017 Constitution, which make the decrees and acts of NCPO legal under Articles 44, 47, and 48 of the 2014 Interim Constitution to ensure that the NCPO Announcements, Orders, and acts comply with Thailand’s international legal obligations and the principles of the rule of law.

2. Review all NCPO Announcements/Orders and Head of NCPO Orders and all other laws adopted by the NLA and amend or repeal all those that violate the people’s rights and freedoms.

3. Immediately repeal the Head of NCPO Order no. 3/2558 and no. 13/2559. When any wrongdoings or public disruption take place, law enforcement officials can already resort to powers prescribed in the Criminal Procedure Code. It is not necessary to retain power offered by these orders.

4. Take all necessary measures to provide redress to civilians whose cases were heard in military courts and have reached the final verdict. Civilians convicted by military courts after the imposition of Martial Law in May 2014 should be allowed to appeal to courts of higher instance and be provided compensation.

1 The Head of the NCPO Order no. 3/2558 and No. 13/2559 endow appointed officers with extensive police powers, including powers to arrest, detain and search suspects without warrants and hold them in places not officially recognized as places of detention for up to seven days.

2 This order prescribes a maximum sentence of two years’ imprisonment or a maximum fine of 40,000 Baht (approximately USD1,250) or both. The order also has a provision that prohibits financial or property transactions.