Home / News / PAKISTAN: World Refugee Day – half of all refugees are children and millions are out of school or getting a makeshift education.

PAKISTAN: World Refugee Day – half of all refugees are children and millions are out of school or getting a makeshift education.

Around the world last year, an average of 28,300 people every day were driven from their homes by conflict, persecution or human rights violations. 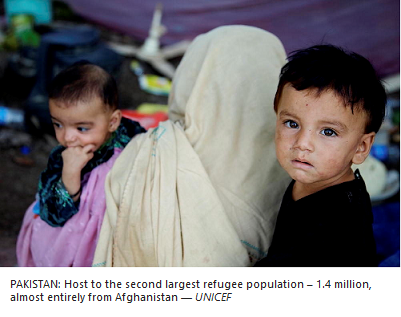 By the end of 2016, the total number of those forcibly displaced had risen to 65.6 million, according to figures released for World Refugee Day today.

They included 22.5 million refugees – the highest number since the United Nations refugee agency UNHCR was founded in the aftermath of the Second World War. The rest were 40.3 million displaced within their own countries and 2.8 million asylum seekers, said UNHCR’s new Global Trends report.

Children under 18 made up half of the refugee population in 2016, as in recent years.
But only 50% of refugee children are enrolled in primary education and 25% are thought to be in secondary school. Many of the schools the children do attend are makeshift ones in camps.

During humanitarian emergencies, such as conflicts and natural disasters, being in school means children are less at risk of child labour, child marriage, exploitation and recruitment by armed forces.

However, less than 2% of all humanitarian aid goes to education.
Gordon Brown, the UN Special Envoy for Global Education, said: “On June 20, World Refugee Day, it is incumbent upon us to deliver a message of hope to the many refugee children caught in the crossfire and deprived of an education.”

In a blog he wrote: “Even when the fighting stops and a country moves toward reconstruction, there can never be true peace unless all children are in the classroom, where they belong.”

The UNHCR report showed that the biggest new factor in 2016 was South Sudan, where the disastrous break-off of peace efforts in July contributed to 737,400 people fleeing the country. That number has continued to rise during the first half of 2017.

The country with the highest number of internally displaced continues to be Colombia – with 7.4 million registered IDPs at the end of 2016, an increase of some 500,000 from the beginning of the year.

All statistics in our picture gallery are taken from the UNHCR Global Trends report.