PHILIPPINES: Reblando: No justice under Aquino 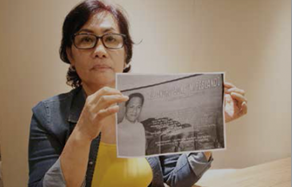 THE widow of one of the journalists killed in the brutal 2009 Maguindanao massacre who has fled to Hong Kong believes the victims will not get justice under the Aquino administration.

Myrna Reblando, widow of Manila Bulletin correspondent Bong Reblando, said she does not see the Quezon City Regional Trial Court handing down a verdict before President Aquino steps down in 2016.

Myrna Reblando continues to seek justice for her late husband./Caption and photo by Hong Kong News

“Not in the term of Aquino…We are already in the IT age and we change our phones often but the pace of trial remains slow,” Reblando said in an interview.

“Aquino can’t even change the pork barrel system. If he really has political will, then he can push things including (the massacre) case,” she added.

Legal experts said the trial could last for years as there were 197 persons accused of participating in the massacre that left 58 people dead, including 32 journalists. Former Sen. Joker Arroyo said it could even last for 200 years or two centuries.

The massacre, which was blamed on the Ampatuan clan, is said to be the worst single attack on a group of media practitioners in history.

Fearing for her safety, Reblando fled to Hong Kong with her youngest daughter in May 2011 and applied for asylum with the United Nations High Commission for Refugees.

They also filed torture claims with the Immigration Department, claiming their lives were in danger if they returned to the Philippines.

The Immigration Department dismissed their claim in April but the Reblandos appealed.

“I think our appeal will turn out well. Our lawyer is frank in telling clients if they still have a chance. Our lawyer believes that Immigration will not turn us down. May laban pa kami,” Reblando said.

Reblando said she would mark the fourth anniversary of the massacre on Nov. 23 by meditating to calm her nerves.

“Malungkot na mahirap na masakit. I’ll be meditating. That’s what I’ve often been doing because it’s not just my life that is at risk,” she said. Her six other children remained behind in the Philippines.

« PAKISTAN: The Long Marchers have completed 700 km and entered Karachi after travelling 27 days on foot